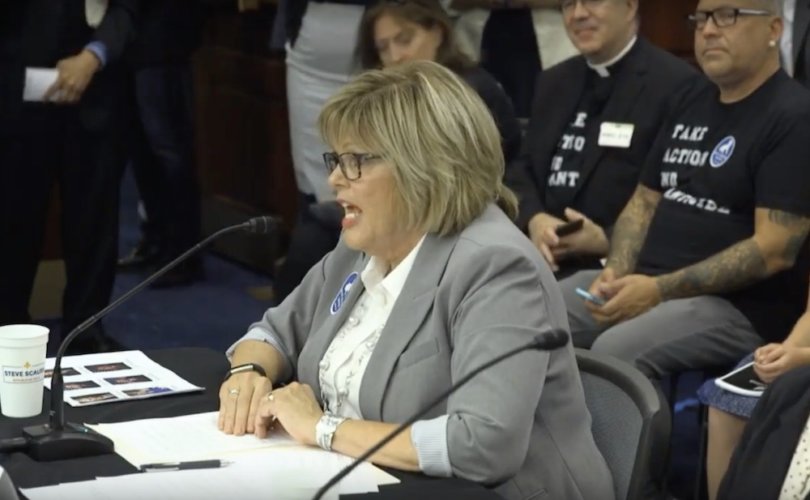 WASHINGTON, D.C., September 10, 2019 (LifeSiteNews) – House Republicans invited a panel of pro-life medical experts to Capitol Hill on Tuesday afternoon to shed light on the problem of infanticide in the United States while legislation guaranteeing care to abortion survivors stalls in Congress.

The hearing was established to examine the Born-Alive Abortion Survivors Protection Act’s (BAASPA’s) “continued relevance to the debate regarding the protection of human life in the United States amid the Democrat Majority’s refusal to allow its consideration.” The bill would require abortionists to transfer infants who survive abortions to hospitals, where they would be given the same degree of care as any wanted newborn. The 2002 Born-Alive Infants Protection Act (BAIPA) recognizes such babies as human beings with human rights, but doesn’t define how specifically to handle them.

Late in February, the U.S. Senate voted 53-44 in favor of the bill, falling short of the 60 votes necessary to overcome the current filibuster rules and pass. All but three Senate Democrats opposed the bill, including every senator currently running for president. House Democrats have repeatedly blocked the bill from receiving a vote, more than 80 times as of this week.

“We thank Whip Scalise, Rep. Wagner, and the Pro-life Caucus for leading the charge to protect babies who survive abortions in the face of extraordinary obstruction from Speaker Pelosi and House Democrats,” Susan B. Anthony List (SBA List) president Marjorie Dannenfelser said in a statement. “The overwhelming majority of Americans – including 70 percent of Democrats – want Congress to pass this lifesaving bill, and over 200 members of Congress have signed Whip Scalise’s discharge petition to hold a vote, but House Democratic Party leaders have spent seven months blocking it.”

House Minority Whip Steve Scalise, R-Louisiana, noted that the hearing was being held in a crowded meeting room in the House Visitors Center, as Democrat House Speaker Nancy Pelosi denied GOP requests to hold it in normal committee rooms that were not in use.

Dr. Robin Pierucci, a seasoned neonatologist and scholar with the pro-life Charlotte Lozier Institute (CLI), used her testimony to elaborate on the medical standard of care that would be guaranteed to abortion survivors under BAASPA, a standard established for all other newborns by the American Academy of Pediatricians’ Neonatal Resuscitation Program (NRP). It “absolutely” applies to premature babies, she says, and has been used to successfully sustain babies born as early as 21 weeks and four days.

“Neither I nor the NICU team can always ‘fix’ or heal the newborn little ones who come to us, but there is no such thing as a human being who is literally worth less than another,” Pierucci said. “Even if there is a decision to not resuscitate due to severe prematurity or congenital abnormality, this is never equivalent to do not care or an excuse to abandon either the baby or the mother. Care is the minimum I owe to both of them. Whether the birth is premature or term, the people I meet are always worthy of this, without exception.”

Dr. Kathi Aultman, a retired OB/GYN and former abortionist who is also with CLI, addressed several common talking points against new infanticide legislation. She cited Julie Wilkinson, a former nurse for notorious late-term abortionist Warren Hern, who “told me that the vast majority of the abortions that they performed were done for convenience, not for fetal anomalies or maternal health problems,” as well as the pro-abortion Guttmacher Institute’s own data showing that women’s reasons for seeking abortions past 20 weeks were largely the same as those who abort earlier.

Aultman testified that it was indeed possible for babies to survive a variety of abortion methods, and that “there have been many cases and multiple witnesses who have come forward and admitted that they saw babies either actively or passively killed after they survived an abortion.”

Aultman added during congressional questioning that BAASPA protects healthcare providers as well as babies by ensuring they aren’t put in a situation where they’re forced to stand by and watch a child needlessly die. She also blamed “regular media” for fueling the impression that infanticide is a myth by simply neglecting to report on examples of it.

Jill Stanek, a pro-life activist with SBA List who rose to prominence in 2001 after exposing infanticide at Christ Hospital in Illinois (her testimony led to BAIPA’s enactment a year later). She relayed her story for the hearing, and how it shed light on Virginia Democrat Gov. Ralph Northam’s infamous January comments about keeping babies “comfortable” until the family decided whether to let them die.

“From what I observed, it was not uncommon for a live aborted baby to linger for an hour or two or even longer,” she continued. “One abortion survivor I was aware of lived for almost eight hours. Of 16 babies Christ Hospital aborted during the year 2000, four that I knew of were aborted alive. Each of those babies – two boys and two girls – lived between 1 1/2 and three hours.One baby was 28 weeks’ gestation – seven months old – and weighed two pounds, seven ounces.”

“How far will doctors go to comfort themselves for letting abortion survivors die?” Stanek asked. “Pretty far. Clearly, little abortion survivors desperately need Congress to pass the Born Alive Abortion Survivors Protection Act, to provide them with legal medical protections and not leave open the decision whether they live or die.”

Tessa Longbons, a CLI research associate, painted a statistical picture of how large the problem really is. Centers for Disease Control (CDC) data found 143 infant deaths from 2003 to 2014 that had been coded as induced abortion or spontaneous miscarriage, which “may be a considerable undercount” as just seven states (Arizona, Florida, Indiana, Michigan, Minnesota, Oklahoma, and Texas) have provided data on at least 160 babies to survive abortions.

“However, still only two-thirds of the states have any laws to protect infants who survive abortions, and some states have been barred from establishing protections for these babies,” she noted.

To overcome Democrat leaders’ obstruction of the bill, House Republicans devised a plan they hope will eventually force a vote on the measure by collecting 218 signatures (a simple majority) for a discharge petition. Scalise announced that the petition only needed 15 more signatures, though all of them would need to come from Democrats as every GOP House member has already signed it.

Only five Democrats backed BAASPA when it was introduced in 2015, and the number of pro-life House Democrats has decreased since then.

“We are grateful to Representatives Steve Scalise and Ann Wagner for hosting the Born-Alive Infant Protection Act hearing today, and moreover bringing this important bill forward,” March for Life president Jeanne Mancini said in a statement. “This bill would simply require medical professionals to treat an infant who happened to have survived an abortion the same as any other newborn patient.

“The fact that the child in question is already born means that this really isn’t about the politics of abortion at all. It is about basic human dignity and compassion, which should be extended especially to the most vulnerable among us. It is unconscionable that Democrats have not allowed a vote on this bill requiring the most basic care.”