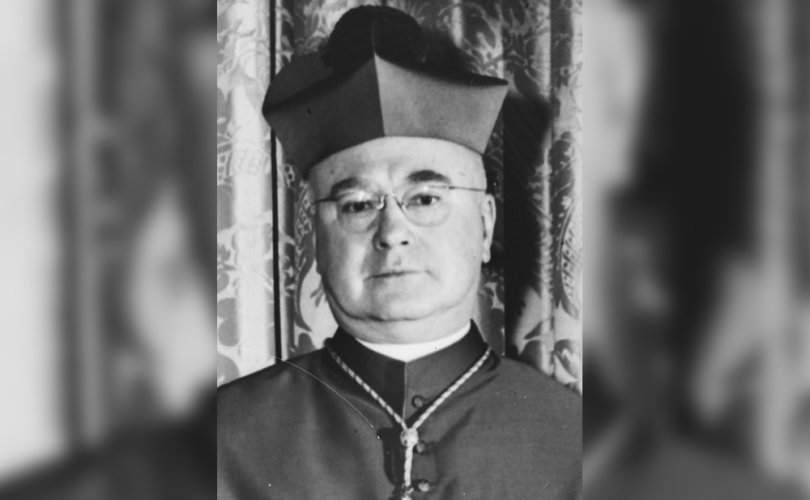 NEW YORK, February 13, 2019 (LifeSiteNews)  – The Archdiocese of New York said that it is seriously considering an allegation that the influential Cardinal Francis Spellman groped a West Point cadet in the 1960s.

Veteran journalist Lucian K. Truscott IV made the claim in an essay published at Salon on February 9. Archdiocesan authorities have invited the accuser to contact the archdiocese.

“This is the first time we have learned of this allegation, and take what the writer says seriously, as we do all allegations of abuse or inappropriate conduct,” Joseph Zwilling, director of communications for the Archdiocese of New York, told Catholic News Agency. “We have never had a substantiated allegation of abuse against Cardinal Spellman, who died in 1967.”

According to Truscott, he was a junior at West Point in 1967 and met Cardinal Spellman in the churchman’s residence behind St. Patrick’s Cathedral. Truscott said that he sought an interview with Spellman for the cadet magazine, The Pointer. At the time, Spellman was 77 years old.

Meeting with Spellman and Truscott were the cardinal’s monsignor assistant and two of Truscott’s fellow cadets, including a photographer from The Pointer. According to Truscott, Spellman placed his hand on the cadet’s thigh and tried to grope him. The monsignor removed Spellman’s hand and chastised him. Truscott says that the cardinal tried the same tactic several times at the meeting.

“When I moved to New York in 1970 and came into contact with the archdiocese of New York working on stories about the church’s real estate, I heard from several priests I befriended that they still talked about Spellman in the New York church, and that his nickname for decades had been ‘Mary.’ That a man as powerful as Cardinal Spellman would be given the feminine sobriquet ‘Mary’ within the church is all the evidence you need that his proclivities were well known by his fellow priests and bishops, and that incredibly, their reaction was to treat it like a joke.

Hell, the monsignor had been pre-stationed right there behind him to insure Spellman did not, shall we say, take things too far with one of the visiting cadets! They knew what he was likely to do. Spellman was at that time 77 and had been a priest for 51 years. There is little doubt in my mind that if he was capable of groping a West Point cadet in front of three witnesses in his residence at St. Patrick’s Cathedral, including a monsignor of his church, he had spent many of those years engaging in sexual abuse of other young men and perhaps children. ‘Mary,’ indeed.”

In Truscott’s account, Spellman gave him a small gift after each instance of groping. “He did it over and over again, and I just kept asking questions and recording his answers like nothing happened. I left the cardinal’s residence that day carrying a couple of tie clasps, three key chains and a couple of gold-plated tie tacks,” Truscott wrote.

Given more recent revelations of clerical sex abuse, Truscott now says that he wishes that he had reported the incident instead of overlooking it. “I wasn’t an innocent victim. I was an adult, a cadet at West Point, and I knew better,” said Truscott.

Truscott was an adult at the time the alleged events occurred. However, New York’s legislature recently passed legislation extending the period for those abused as minors to bring forward allegations of sex abuse.

Cardinal Spellman was ordained a priest in the Archdiocese of Boston, and later worked in the Vatican’s Secretariat of State in the 1920s and 1930s. He smuggled from Paris the anti-fascist encyclical Non Abbiamo Bisogno penned by Pope Pius XI for its release in 1931. He also served as auxiliary bishop of Boston from 1932 to 1939, before being named archbishop of New York by Pope Pius XII. In this role, Spellman oversaw Catholic chaplains throughout World War II and afterwards. Spellman was influential in American politics and foreign policy for decades.

Confidential FBI files show that Spellman was a valued contact and source of information to the top law enforcement agency. A January 1954 memo to J. Edgar Hoover indicated that Spellman was of “assistance in furnishing information concerning prominent Catholic priests and laymen,” who has “on several occasions made available information in connection with research matters.”

In 1984, four pages alleging the cardinal was a homosexual were redacted from a biography about him after the publisher concluded that there was no proof of the alleged homosexual behavior.

“A biography of Francis Cardinal Spellman, which in its early stages had asserted that the late Roman Catholic Archbishop of New York was a homosexual whose sex life ‘was a source of profound embarrassment and shame to many priests,’ will be published Oct. 31 without that assertion,” the New York Times reported in 1984. “Four pages of similar assertions, which were in the bound galleys that had been distributed to reviewers last July, also will not appear in the book.”