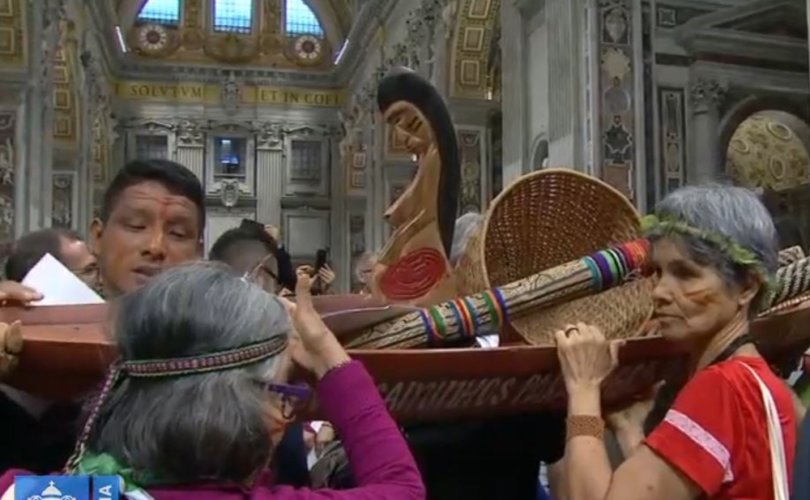 A boat carrying a wooden statue of a naked woman with child ('Pachamama') is carried by indigenous people in St. Peter's Basilica during the opening ceremony for the Amazon Synod, Rome, Oct. 7, 2019.Vatican News / video screen grab

ROME, December 5, 2019 (LifeSiteNews) — An influential and highly regarded priest has come under fire from a left-leaning American news outlet for comments critical of the honors bestowed upon “Pachamama” in St. Peter’s Basilica and the Traspontina Carmelite Church in Rome during the Amazon Synod.

In a Dec. 5 article for the ‘People’ section of the National Catholic Reporter, Chicago-based correspondent Heidi Schlumpf targeted Monsignor Andrew Wadsworth, a priest of the Oratorian Community of St Philip Neri (a community in formation for the Oratory in the Archdiocese of Washington since 2013), for a series of Facebook posts he made expressing disapproval of the recent events surrounding the Pachamama idol in Rome and elsewhere.

Since 2009, Msgr. Wadsworth, a British linguist, has also served as executive director of the ICEL Secretariat in Washington, D.C., which proposes English translations of Latin liturgical texts of the Roman Rite to bishops’ conferences for use throughout the world.

“Several posts on the Wadsworth Facebook account criticized the incorporation of indigenous symbols into the Synod for the Amazon, particularly what some called the ‘Pachamama’— a fertility goddess or ‘Mother Earth’ figure in South American culture,” Schlumpf wrote. She omitted that Pope Francis himself was among those who identified the statue as “Pachamama.”

Schlumpf also singled out this post by Msgr. Wadsworth on October 26:

“I, Andrew Wadsworth, do not wish to belong to the new idolatrous Pachamama Church currently being brought into being – I wish to remain faithful to the Catholic faith into which I was born and in which I have lived my life and, please God, in which I shall die; the faith in which God in his mercy has called me to be a priest, the faith of my fathers, the faith for which our glorious English martyrs died and the faith so wonderfully defended and explained by St. John Henry Newman of the Oratory. Jesus, have mercy upon the Church!”

Schlumpf failed to note that Msgr. Wadsworth made his statement as the Pachamama statue (allegedly recovered from the Tiber) was being placed at the center of Traspontina Church, just steps from the Vatican, and surrounded by candles, with pews turned around so that many of those praying before the Pachamama statue would have their backs to the Most Blessed Sacrament.

Schlumpf also drew attention to what she called Msgr. Wadsworth’s “right-wing” ties to people such as Msgr. Charles Pope, and his willingness to post interviews from “conservative” outlets like EWTN and LifeSiteNews.

Msgr. Wadsworth is described by friends and daily Mass goers as “an accomplished linguist, musician, and liturgist and a devoted shepherd.” He “tells the unvarnished truth to us who need to understand that our Christian vocations are challenging, even difficult, but always under the grace of God’s Providence,” a source close to the Oratory said.

In comments to LifeSite, Msgr. Wadsworth noted that the NCR headline, ‘Head of liturgy commission criticizes Amazon Synod on social media’ contains two inaccurate assertions: “I am not the Head of ICEL,” he explained. “ICEL is a commission of bishops of which the chairman and all the officers are bishops. I am Executive Director of ICEL’s Secretariat, managing the day to day work of the Commission.”

Secondly, he added, “I have not personally criticized the Synod but I do wish to be part of a wider discussion that allows important questions to be aired and considered.”

Could it be that Schlumpf’s particular interest in Fr. Wadsworth arises from his official responsibilities in regard to the English translation of the liturgy, a neuralgic question for the Catholic left, which grieves the loss of the ambiguous (not to say tendentious) former translation of the Novus Ordo Missae that prevailed from the 1970s until the pontificate of Benedict XVI?

Such a tactic is certainly characteristic of the modernist establishment in the U.S. Church, which often takes its cue from Saul Alinsky’s notorious Rules for Radicals: “Pick the target, freeze it, personalize it, and polarize it.” Cut off the support network and isolate the target from sympathy. Go after people and not institutions; people hurt faster than institutions.”

Msgr. Wadsworth today issued a fuller response to the National Catholic Reporter article, which we publish here below.

I have never made any personal criticism of the recent Amazonian Synod, either in social media, my preaching or public speaking. The synodal process exists to enable the Holy Father to consult widely in considering various aspects of the life of the Church. This is uncontentious. On occasion, I have reposted on Facebook articles of others, including bishops and cardinals, who offer commentary about some of the issues surrounding the recent Synod. I believe that to do so is part of the process whereby we can all enter into a dialogue concerning the discussion of serious challenges that the Church faces at this time. You will be aware that a spectrum of opinions is expressed, within the Church, in this respect.

Where I have become increasingly distressed is in relation to the matter of worship, which must always be of central importance to the life of the Church. In particular, I would cite three issues which are coterminous with the Amazonian Synod, although not necessarily part of its formal proceedings. The three issues are:

1. The ceremony which took place in the Vatican Gardens on October 4, in the presence of Pope Francis, in which some participants, including religious in their habits, seem to be engaging in a religious rite which includes an act of prostration, usually understood to imply worship or veneration, in a catholic context.

2. The enthronement in the church of Santa Maria in Traspontina of statues of the Pachamama, the church being reordered in such a way that the attention of those entering that church was reorientated towards the Pachamama and away from the altar and the sanctuary.

3. The publication of a prayer by the Italian Bishops’ Conference in which the Pachamama is addressed as a propitious deity to whom sacrifice is offered. The prayer reads:

I do not believe that I am alone in raising these questions which touch upon foundational tenets of the Judaeo-Christian revelation, expressed in the first commandment of the Decalogue. The Church’s growing understanding of the implications of inculturation is a matter of great importance but I would humbly suggest that it cannot extend to confusion in relation to the worship of the God who is the Author of our salvation.