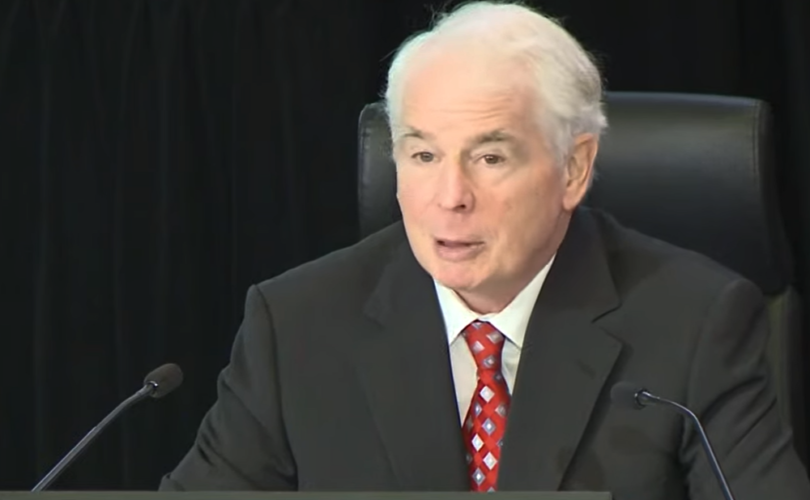 Commissioner Paul Rouleau opens the public hearings into the use of the Emergencies Act in Canada.YouTube

Commissioner Paul Rouleau said in his opening remarks that uncovering “the truth is an important goal,” and that “the public has a right to know what has happened.”

“While inquiries seek to uncover the truth, they are not trials,” Rouleau added.

Of note is that Rouleau is also a former Liberal Party staffer as well.

The hearings are open to the public via livestream and will call forth at least 65 witnesses over six weeks.

Government lawyers claimed in their opening statements that the use of the EA was warranted.

“The evidence will show that the invocation of the Emergencies Act was a reasonable, and necessary decision given the escalating, volatile, and urgent circumstances across the country,” Government of Canada lawyer Robert MacKinnnon said.

Lawyer Brendan Miller, who is representing the Freedom Corp. group that represents many protesters in Ottawa, said the use of the EA was not needed.

Canadian Constitution Foundation legal counsel Sujit Choudhry said that the use of the EA “severely restricted the rights to freedom of expression, assembly and association.”

“The Emergencies Act is the successor to the discredited War Measures act which was abused during the FLQ crisis in Quebec,” Choudhry noted.

The provincial governments of Alberta and Saskatchewan joined in on the hearings to testify in objection to Trudeau’s use of the EA to crush the Freedom Convoy.

Alberta attorney Mandy England said that “it is important for the Government of Alberta to share with Canadians the facts as to how Alberta was able to handle the international border blockades prior to the invocation of the federal Emergencies Act.”

“Existing law enforcement tools that were already in place were completely sufficient and they were successfully used,” she added.

The Public Order Emergency Commission released the full list of 65 witnesses, which includes Trudeau and seven members of his cabinet. It said that members of the public “are welcome at the hearings,” both in person and via a livestream, which will be held at the Bambrick Room at 395 Wellington Street in Ottawa.

The livestream will start each day at 9:30 a.m. ET and can be found on the commission’s website. The hearings will run until November 25.

Several people associated with the Freedom Convoy will speak at the hearing, as will members of the Royal Canadian Mounted Police and the Ottawa Police, and the Mayor of Ottawa.

In April, the Public Order Emergency Commission was formed by the government with the intention to look into the “circumstances that led to the declaration of emergency that was in place from February 14 to February 23, and the measures taken for dealing with the emergency.”