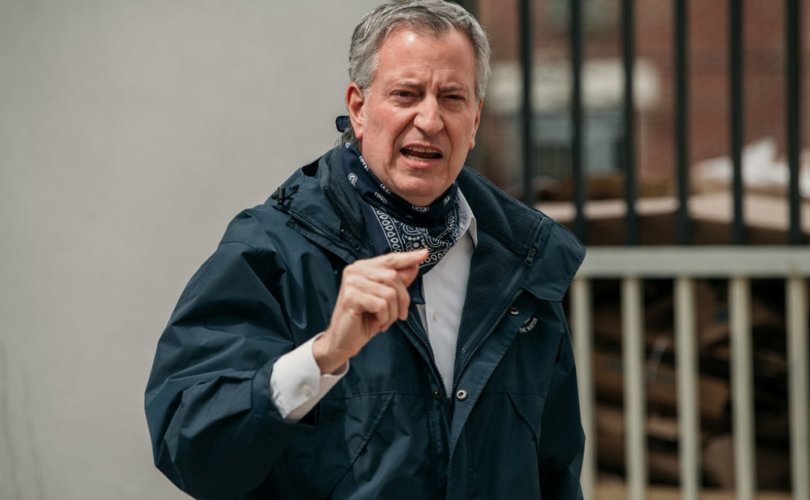 New York City Mayor Bill de Blasio posted a short video on Twitter on April 18, explaining how to report any violations of social distancing requirements imposed by the government.

“Now look, thank you everyone who’s done it the right way, but we still know there’s some people who need to get the message. And that means sometimes making sure the enforcement is there to educate people and make clear we’ve got to have social distancing,” de Blasio said.

He then pointed out that it is “easier than ever” for the people of New York to report their neighbors to the authorities. “When you see a crowd, when you see a line that’s not distanced, when you see a supermarket that’s too crowded — anything — you can report it right away so we can get help there to fix the problem,” the mayor said.

“All you’ve got to do is take the photo and put the location with it, and, bang, send a photo like this and we will make sure that enforcement comes right away,” he continued. “Text the photo to 311-692 and action will ensue.” There is also an app.

How do you report places that aren’t enforcing social distancing? It’s simple: just snap a photo and text it to 311-692. #AskMyMayor pic.twitter.com/WQdCcVf1Rl

According to the New York Post, an NYPD source commented that now, “311 is more [of a] priority than someone getting robbed at gunpoint. The NYPD is making it mandatory to answer 311 within 45 minutes, otherwise [the commanding officer] is gonna have to explain himself.”

“People getting jumped, robbed, assaulted…. doesn’t matter…. my captain asks about why a 311 job is almost reaching 45 minutes [and] not being closed out yet,” the same source added.

City Hall spokeswoman Olivia Lapeyrolerie discredited the source’s claims as “false and dangerous.” She considered it “a slight to the hardworking men and women of the NYPD to imply that they would not respond to a 911 emergency with anything but the utmost urgency.”

When Mayor de Blasio first asked people living in the Big Apple to report their neighbors, the 311 system was flooded with prank messages, causing it to be temporarily shut down.

“Photos of extended middle fingers, the mayor dropping the Staten Island groundhog and news coverage of him going to the gym have all been texted to a special tip line that de Blasio announced Saturday, according to screenshots posted on Twitter,” wrote the New York Post.

On the west coast of the United States, Los Angeles Mayor Eric Garcetti had also called on his people to be “snitches” amid the coronavirus pandemic.

“If any non-essential businesses continue to operate in violation of the stay at home order, we’re going to act to enforce the safer at home order and ensure their compliance,” Garcetti said during a press briefing at the end of March.

“We need to make sure that everybody continues to let us know where those folks are. If you’ve observed recurring violations of the ‘safer at home’ order, please continue to let us know,” he continued.

Garcetti then asked, “You know the old expression about snitches?”

“Well in this case, snitches get rewards,” he said, answering his own question. “We want to thank you for turning folks in and making sure we are all safe.”

Mayor de Blasio, meanwhile, has come under fire not only for his call to report on other people’s behavior amid the coronavirus pandemic, but also for threatening churches with having to close down permanently if the faithful come together for any worship services.

“I want to say to all those who are preparing the potential of religious services this weekend — if you go to your synagogue, if you go to your church and attempt to hold services after having been told so often not to, our enforcement agents will have no choice but to shut down those services,” de Blasio announced during a press conference streamed online in March.

In case of disobedience, law enforcement “will take additional action up to the point of fines and potentially closing the building permanently,” he added.

In response to a large gathering for a Jewish funeral ceremony, de Blasio said, “My message to the Jewish community, and all communities, is this simple: the time for warnings has passed. I have instructed the NYPD to proceed immediately to summons or even arrest those who gather in large groups. This is about stopping this disease and saving lives. Period.”