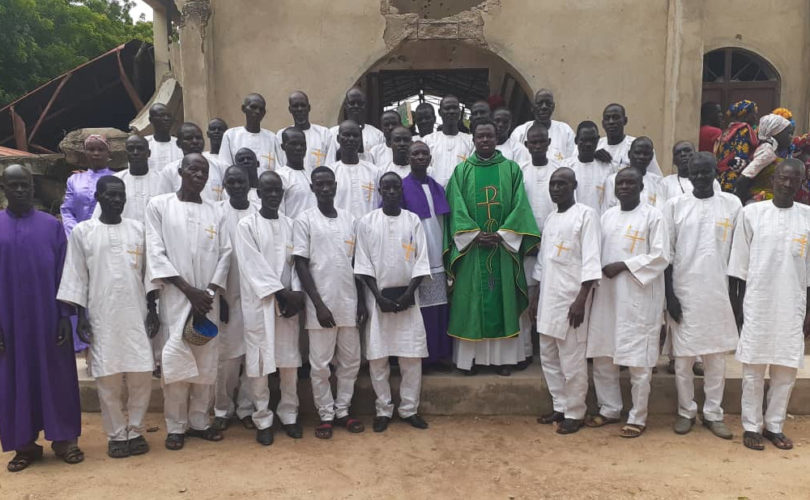 MADAGALI, Nigeria, May 28, 2021 (LifeSiteNews) — A newly ordained priest willingly agreed to go to one of the most dangerous places in the world to serve the faithful.

Fr. Innocent Sunu was so happy to have become a priest that he embraced his first assignment in the Nigerian heartland of the virulently anti-Christian, anti-Western Boko Haram terrorist organization. Boko Haram means “Western education is forbidden,” and the world was horrified in April 2014 when Boko Haram militants kidnapped 276 teenaged schoolgirls, mostly Christian, from their school in Chibok, a town just over a 3-hour drive from Magadali.

“When I told some priests that I am going to Madagali as parish priest there, some priests said, ‘This bishop wants to kill you,’” Sunu told LifeSite’s editor-in-chief John-Henry Westen in a recent interview.

But the young priest, who had been waiting for seven years to be ordained, didn’t see it that way.

“I said, ‘No, this bishop doesn’t want to kill me,’” Sunu recalled. “He wants me to go and do something special.”

That was in November 2017, less than a year after two female suicide bombers detonated themselves in Madagali, killing 57 people and injuring over a hundred more. In addition, four previous Catholic pastors had been murdered in the town before that, and Sunu was the first priest to go to its parish in five years.

Sunu had the right to refuse such a dangerous assignment, but he chose not to, in part because he had waited for so long to become a priest. The second son of a Muslim father and a Catholic mother, Sunu, his brother, and his seven sisters chose to become Catholics themselves — and eventually their father did, too.

Impressed with the students at the local minor seminary, Sunu and his brother got permission to enroll. Although the older brother eventually left the path to ordination, Sunu continued his religious studies as a seminarian and completed his year of pastoral work. He expected to be ordained with his class in 2009, but for some unknown reason, the apostolic administrator in charge of his diocese refused to ordain him. Seven years later, the new bishop arrived, met Sunu, had a look at his file, and asked him if he’d still like to become a priest.

When he was offered his dangerous post, the young priest had an unshakeable confidence in God’s plan because God had “never failed” him in the seven years he went without being ordained. Sunu also received an incredible sign when, after his lonely drive to his new home, seeing no cars without soldiers in them, he discovered that the parish church had been burned down, completely destroyed.

“So I was in the car, crying, and then the rosary that I hung on my mirror fell — I don’t know how it fell. It fell on my body, and I held it,” Sunu remembered.

“I was not saying any particular decade. I was just saying the ‘Hail Mary’ and crying. And then a young altar server came and knocked at my door. When I wound down [the window], he said, ‘It’s time for Mass. The people are waiting.’”

The people used stones from the ruined parish compound for seats and had set up a table under a canopy for the altar. As Sunu reflected on the damage — the burnt church, the burnt rectory, the burnt clinic, the burnt school — and the faith of the people waiting for their priest, he became convinced the place was marked by God.

“I knew from that day, something must happen in that place,” he said. “So that was how I took on my responsibilities as parish priest — for four years now.”

The threat from Boko Haram has been omnipresent, but the thought of his people waiting for him has always propelled Fr. Innocent to say Mass, even when warned not to by the local military. Sadly, the military has not been the Christians’ liberator from Boko Haram as much as the militants’ co-oppressor. The priest described how the local soldiers have “become saboteurs,” appropriating local businesses and farms, exporting goods needed by the people to nearby Cameroon. He knows that he cannot go too far in remonstrating with these soldiers because they could do “anything” to him and then blame Boko Haram.

“And when Boko Haram comes, they are the first to run,” the priest scoffed.

The one change Sunu sees in the so-called peace is that there are “no churches left to burn.” Also, the people who took refuge from Boko Haram in neighboring countries have returned exhausted and with such diseases as hepatitis, malaria, and typhoid. There is widespread hunger in Sunu’s parish, as people are not allowed to farm, and food prices have skyrocketed. People faint or are sick in church. Sometimes they have only one set of clothes that they wear day in and day out.

NGOs, terrified of the dangerous area, stay only an hour. And in the absence of any effective government, Sunu has discovered that he must be everything to his people.

“But it’s not enough because there are more than a thousand people who use [it] … every day,” Sunu said.

The Madagali Catholics are strong in faith, but they are in danger of losing hope in their future. The priest has noticed that the men in the community in particular have lost hope in life. However, the women are willing to do any work to survive and thrive. Sunu estimated that he knows 300 to 400 women eager to sustain themselves. He offered, for example, the business acumen of a woman who thinks she can earn money cooking plantains. For $70, she can get the frying pan, fuel, oil, and fruit she needs to begin making a living.

“Once the business starts, it blossoms,” the priest said.

“So we need your support,” the priest continued. “First of all, pray for us so that our faith will be intact. Second, get us to talk to you like this. This is an opportunity … to hear and get to know what is happening from somebody who is at the frontline.”

The priest asked for financial help, or even just medicine and clothing, for his people, and LifeSiteNews readers responded by raising €53,189 — the equivalent of $64,872. The target figure of €50,000 was raised within a matter of hours after Westen’s interview with Sunu was published.

Thanks to Fr. Innocent Sunu’s witness of faith — and to our generous readers — it looks as though something good will indeed happen in that place.