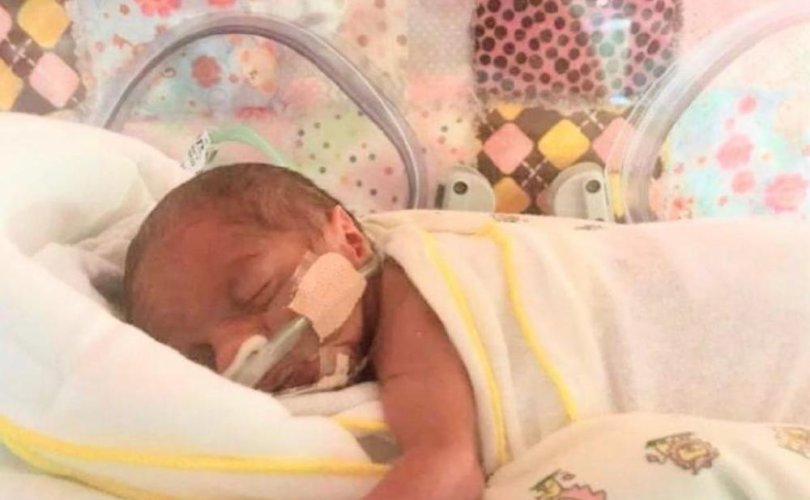 August 29, 2019 (LifeSiteNews) — The Facebook-owned Instagram has censored an ad highlighting a woman who chose life for her child despite being urged to abort to save her own life, according to the pro-life group Save the Storks.

In a recent Instagram post, the group tells the story of Marissa, a woman who was diagnosed with the return of an aggressive brain tumor while seventeen weeks pregnant. Doctors urged her to abort her child, but she refused, giving birth to baby Victoria Lee via C-section and beginning chemotherapy days later.

“We were so moved by Marissa’s courage,” Save the Storks media director Victoria Robinson wrote. “Whether Marissa is healed this side of Heaven or not, her miracle has already happened[.] … For the rest of us, our miracle is witnessing someone choosing life over the life of their own in a world where it has little to no value anymore.”

Save the Storks wanted to boost the story as an ad, the group continues in a press release, but Instagram blocked it on the grounds that it was “shocking, sensational, or excessively violent content” that “creates an unexpected experience for users, and goes against our core value of fostering a positive global community.”

In response, Save the Storks appealed Instagram’s actions almost a week ago but says it has not yet received an answer. The pro-life group calls Instagram’s decision an example of “overt political bias” against the “conservative stance on life.”

The incident is only the latest case of Facebook censoring pro-life content. Other individuals and organizations to see ads rejected or posts suppressed include LifeSiteNews, the Susan B. Anthony List, the American Pregnancy Association, Choice For Two, Elizabeth “Activist Mommy” Johnston, and recent pro-life films about Kermit Gosnell and Roe v. Wade. Facebook also opted to block foreign pro-life ads in Ireland’s 2018 abortion referendum, despite Irish law not requiring such a ban, nor did Irish officials request one.

While most of these controversies have concerned Facebook’s dominant social network of the same name, the company drew controversy in May for a ban on so much as linking a handful of right-wing media personalities the company deemed “dangerous” on Instagram as well as Facebook.

Save the Storks works to promote respect for human life and support for crisis pregnancies through a variety of means, most notably their Stork Buses that travel the country as mobile pregnancy support centers, complete with ultrasound equipment. The group credits the buses with saving more than 5,000 lives since 2012.