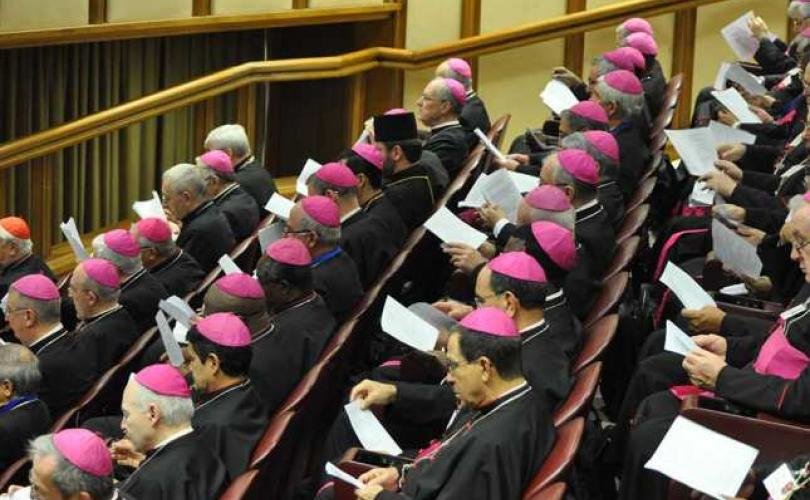 ROME, May 11, 2018 (LifeSiteNews) — The Vatican has announced that a key document for the October 2018 Synod on Young People, the Faith and Vocational Discernment has been finalized.

The news comes amid growing concerns that key figures of the upcoming synod may try to manipulate the outcome to support a change in the Church’s teaching, particularly on homosexuality and contraception.

A statement issued earlier this week by the Vatican’s office of the Synod of Bishops said its general secretary, Italian Cardinal Lorenzo Baldisseri, presented the Instrumentum laboris, i.e. working document, to Pope Francis and members of the Ordinary Council at a meeting on May 7-8 in Rome.

“The text gave rise to an interesting exchange of views, in the form of suggestions and observations that were included in the document, in order to provide the Synod Fathers with an increasingly suitable instrument for their discussion,” the statement said. “The amended text was agreed by all participants,” it added.

The Synod of Bishops, as it is usually understood today, is an advisory body for the Pope. It was established by Pope Paul VI in 1965 as the Second Vatican Council was coming to a close.

Under canon law, this body comprises a group of bishops selected from different parts of the world, who meet at a time chosen by the pope to promote the close relationship between the pope and bishops. General assemblies of the Synod of Bishops discuss matters pertaining to the universal Church, while special assemblies address problems in specific geographical areas, such as that held on Africa in 2009.

The bishops are meant “to assist the Roman Pontiff with their counsel in the preservation and growth of faith and morals and in the observance and strengthening of ecclesiastical discipline, and to consider questions pertaining to the activity of the Church in the world.”

As such, it has no canonical power and no jurisdiction. Therefore, it cannot decide matters of doctrine, as an ecumenical council would. It is up to the pope to ratify the decisions of a synod, which he does by issuing an Apostolic Exhortation – a papal text written shortly after the conclusion of the synod.

The 2018 meeting is being organized by the Vatican’s Synod office, led by Cardinal Lorenzo Baldisseri, with the help of the group’s 15-member ordinary council, 12 whom were elected to their roles at the end of the last Synod in 2015.

The full list of those elected to the council by the members of the 2015 Synod include:

An official in the Vatican’s office of the Synod of Bishops told LifeSiteNews that all members were present at this week’s meeting, except Cardinal Pell and Cardinal Rodriguez Maradiaga.

Maradiaga’s absence is probably explained by the fact that he is suffering from prostate cancer and coming to the end of a six-month periodic course of treatment in Houston.

At the meeting, Cardinal Baldisseri explained that the Instrumentum Laboris had been prepared together with a group of “experts” who collected material from five sources: the responses from “eligible bodies,” e.g. national bishops’ conferences, to the Questionnaire at the end of the Preparatory Document; responses to the online Questionnaire addressed to young people; the acts of an international conference held in Sept. 2017; comments freely received from individuals and groups; and the final document of a pre-synodal meeting held on March 19-24, 2018.

Cardinal Baldisseri highlighted the “lively participation” of young Catholics as well as representatives from other religions at the pre-synod youth meeting held at the Vatican in March.

“I am representing the Hindu religion and when I met the Pope he told me he respects all religions,” says the young man pictured in the video screen above.

The gathering brought together some 300 young people from around the world. Its final document stated that young people “may want the Church to change her teaching” on “polemical issues” such as contraception, abortion, homosexuality, cohabitation, marriage, and the priesthood, “or at least to have access to a better explanation and to more formation on these questions.”

“Even though there is internal debate, young Catholics, whose convictions are in conflict with official teaching, still desire to be part of the Church. Many young Catholics accept these teachings and find in them a source of joy. They desire the Church to not only hold fast to them amid unpopularity but to also proclaim them with greater depth of teaching,” the document said.

At the meeting earlier this week, the Members of the Ordinary Council also discussed some “aspects and organizational criteria” of the Synod of Bishops, and of the next Ordinary General Assembly in October.

The text of the 2018 Synod’s Instrumentum Laboris has not been made public but is expected out in June. Also still unknown are the names of bishops (synod fathers) and expert consultants who will take part in the Oct. 3-28 gathering.

Despite concerns that a faction of synod fathers and organizers may attempt to predetermine the outcome of the deliberations in a way that is heterodox to the Catholic faith, sources say that bishops will be better prepared and on high alert for potential rigging, given their experience with the 2015 Extraordinary Synod on the Family.