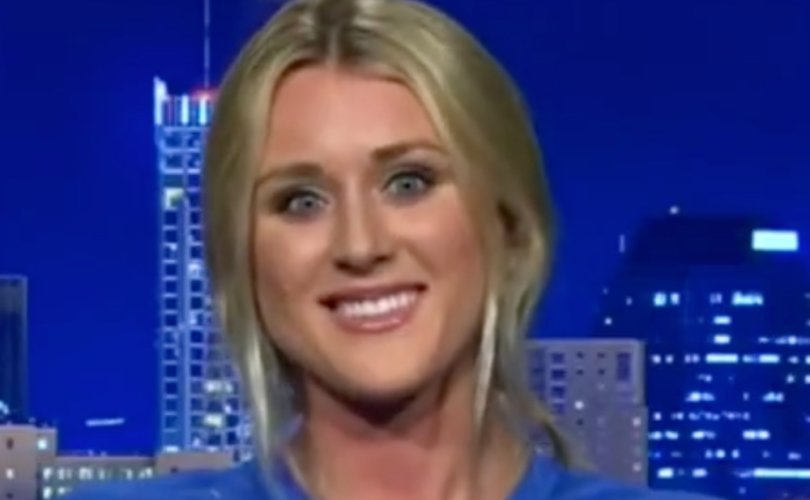 PHILADELPHIA (LifeSiteNews) – A women from the University of Kentucky who swam against “transgender” athlete William “Lia” Thomas in March, told Tucker Carlson that Thomas’ nomination by the University of Pennsylvania (UPenn) for National Collegiate Athletics Association (NCAA) Woman of the Year was “insulting.”

While speaking to FOX News’ Carlson on Monday, Riley Gaines said, “It’s a mockery. That’s what this whole thing has turned into, something we as female athletes have dedicated our whole lives to. It’s something that people are laughing at. It’s an insult. It’s incredibly disheartening. And quite frankly it’s wrong.”

University of Kentucky swimmer Riley Gaines reacts to Lia Thomas being nominated for NCAA woman of the year:

“We have an NCAA woman of the year who spent 95% of their life as a man. It’s incredibly insulting.”
pic.twitter.com/zNMLJrHSVr

“We have an NCAA Woman of the Year [nominee] who spent 95% of their life as a male,” Gaines continued. “It doesn’t add up. It’s incredibly, just, insulting. Think of all the athletes at UPenn, the deserving female athletes who did not get this nomination, and Thomas did after quite literally only one year. Woman of the Year, it makes sense because it’s been one year Thomas has spent as a female.”

“It’s a punch to the gut. It’s a slap in the face. It’s a total regression of what Title IX stands for.”

Gaines  read from a letter that she received from the NCAA Monday, emphasizing that the document stated that the award was “rooted in Title IX.” According to this document, the award is supposed to “honor incredible women and reflect the impact of women on intercollegiate sports,” this year to celebrate the 50th anniversary of Title IX.

Commenting on her reaction to these words, Gaines told Carlson that “I just laughed because that’s what we’re doing at this point … laughing at women.”

Thomas has shattered female athletes’ records and generated national controversy since he began competing on the women’s team in 2019. He had swum for three seasons on the men’s team.

On March 17, 2022, at the NCAAA championships at McAuley Aquatic Center in Atlanta, Thomas was declared the winner of the women’s 500-yard freestyle. His time was 1.75 seconds ahead of the best female swimmer, Virginia’s Emma Weyant of Sarasota, Florida. Florida Gov. Ron DeSantis subsequently signed a proclamation declaring Weyant the “true winner” of this competition.

Thomas then swam against Gaines at the 200-meter event on March 18, tying with her for fifth place. During the subsequent photo shoot of the winners, officials made Gaines pose with the sixth place trophy, while Thomas posed with the trophy for fifth place. The NCAA eventually mailed a trophy to Gaines.

Other female swimmers and athletes complained about Thomas’ participation in the event. Virginia Tech swimmer Réka György told the NCAA in a letter that “[e]very event that transgender athletes competed in was one spot taken away from biological females.” A letter sent by former Olympians and coaches from the University of Arizona after Thomas won the 500-yard freestyle also asked the NCAA to protect women’s sports

Thomas’ nomination is more fuel for the fire raging through a national conversation about transgenderism.

Last month, Matt Walsh of the Daily Wire released his hit documentary What is a Woman? A segment of the documentary touches upon Thomas’ presence on the UPenn swim team. A female swimmer from UPenn told Walsh that the university attempted to shut down complaints about Thomas by threatening swimmers with being branded as “transphobic” if they complained.

Last week, Fatima Gross Graves, the president of the National Women’s Law Center, could not define what a woman is after being asked in a Senate hearing. Also in a Senate hearing last week, a law professor accused Republican U.S. Sen. Josh Hawley of “transphobia” for asking if only women can get pregnant.