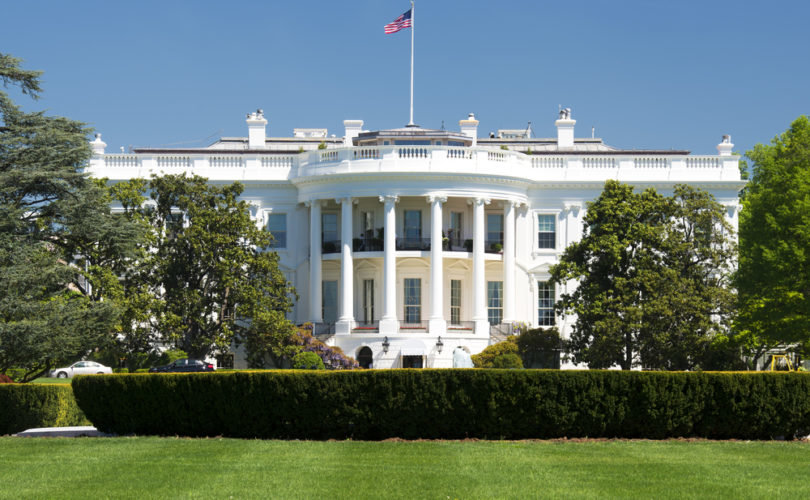 The activists, who physically blocked all 10 entrances of the White House leading to dozens of arrests by the Secret Service, called upon the Biden administration to refuse to make deals with Republicans, saying Biden must “stop negotiating with the party of violent insurrectionists.”

The protestors (who bragged, “We shut down the White House!”), are members of the Sunrise Movement, a youth political activist group funded by George Soros. The movement calls for a full implementation of the radical Green New Deal, which would overhaul existing social and economic structures in line with the World Economic Forum’s Great Reset.

The far-left group is dedicated to “building an army of young people to make climate change an urgent priority across America,” and also advocates for radical policies related to race, policing, and incarceration. The organization adjures Biden to create a fully funded “Civilian Climate Corps” employing 1.5 million people in “good paying union jobs,” and to “pass the boldest climate policy possible.”

The bipartisan eight-year, $1.2 trillion infrastructure deal struck last week includes $579 billion in new spending. But left-wing climate activists say the deal falls far short of the $10 trillion they would like to see put toward the “climate crisis” over the next 10 years.

Sunrise Movement’s Nikayla Jefferson, who describes herself as an “angsty climate optimist” and is a public voices fellow with Yale University’s Program on Climate Communication, wrote Monday that 500 activists were “enroute to barricade all 10 entrances to the White House” to demand that President Biden act upon his “elected mandate of climate justice” to create “ambitious solutions to the (climate) crisis.”

According to the organization’s website, “Joe Biden must assemble a powerful governing team to stop the climate crisis, create millions of good-paying jobs, address systemic racism, and control the COVID-19 pandemic. He has a climate mandate that he must follow through on.”

The website enumerates the primary demands of the Green New Deal, a bucket list of radical agenda items. According to the site, the Green New Deal involves packing the Supreme Court, instituting a $2,000 monthly universal basic income, abolishing the Electoral College (which it calls “racist”), granting statehood to Washington, D.C. and Puerto Rico, nuking the filibuster, and “creating millions of good jobs designed to tackle climate change.”

House Democrats Alexandria Ocasio-Cortez and Jamaal Bowman of New York, along with Cori Bush of Missouri, joined in the blockade at the White House, pushing for a radical new infrastructure plan. Their agenda would centralize power to the federal government, obliterate the fossil fuel industry, and destroy reliable access to electricity.

Ocasio-Cortez, who sponsored legislation for a Green New Deal in 2019 that failed to advance in the Senate, said, “What a lot of folks here in D.C. don’t understand is that while this may be the hottest summer of their lives, it’s going to be one of the coolest summers of our lives. And so what that means is that they brought this heat on us, so we bring the heat on them.”

The congresswoman did not specify how politicians were directly responsible for the hot summer weather.

Bowman has called for “racial justice” and “climate justice” in any new infrastructure bill.

“They occupy our streets. They mass incarcerate us, but they leave us food insecure, in transportation deserts, and our buildings and schools falling apart. F*** that!” Bowman said.

It is unclear who Bowman was referring to by “they.”

Despite his participation in this week’s shutdown of the White House, Bowman had tweeted January 10 about the breach of the Capitol building by Trump supporters on January 6, saying “(w)e need answers,” and called for “a 9/11 style commission to investigate.”

Ocasio-Cortez revealed last month that she was attending therapy due to the “extraordinarily traumatizing” experience of being in her office near the Capitol building during the Capitol riot.

Media outlets branded the climate activists’ obstruction of the White House this week as a “protest” and a “non-violent blockade,” a sharp distinction from the treatment given to the January 6 riot that has been characterized as a “violent insurrection.”

So far, two grandmothers — a 49-year-old and a 69-year-old — have been charged for entering the Capitol building on January 6, and hundreds of Trump supporters are currently being held in a dedicated jail under “harsh almost solitary confinement conditions” while being denied bail and their constitutional right to a speedy trial.

As of today, climate activists continue to blockade the White House. Newsweek reported Wednesday that around 150 protestors were on the White House property, with some activists chaining themselves across five separate entrances.