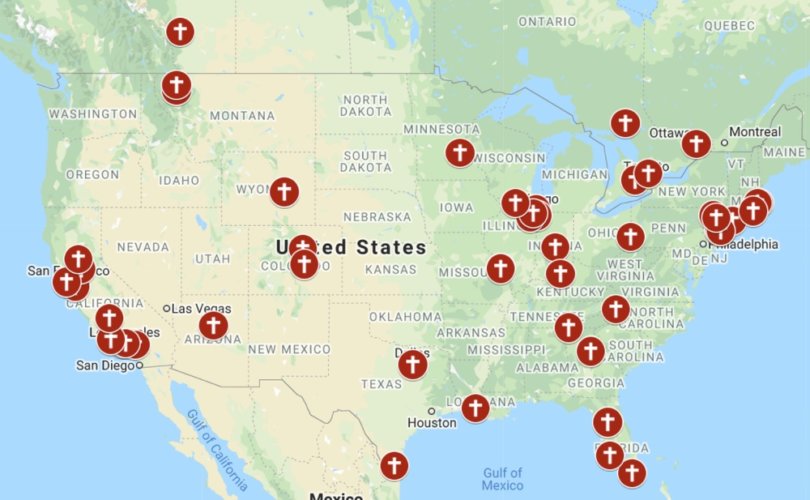 July 21, 2020 (LifeSiteNews) – A new interactive map is keeping track of attacks “on Catholic statues, parishes and persons in North America in 2020.” Launched by Complicit Clergy, an organization of laypeople attempting to hold Catholic clergy accountable for sexual perversion and corruption, the new project already lists over 50 incidents in the United States and Canada.

Readers can click on each pin on the map to find out more about the incident.

Just a few days ago, a White House official stated that the “criminals” who have violently attacked Catholic religious symbols will be prosecuted “to the fullest extent of the law,” according to the Daily Caller.

The unnamed official told the online news source that President Donald Trump has joined “the Catholic community in solidarity” during the wave of church-burnings and other desecrations.

LifeSiteNews has reported in detail on a great number of acts of vandalism, carried out not only against Catholic churches, but also other Christian houses of worship, and which seemingly occurred with increasing frequency in recent weeks.

Last week, a parish in New Haven, Connecticut was vandalized late Wednesday evening or early Thursday morning, with “anarchist and satanic symbols” painted on the doors.

Without mincing words, the local Archdiocese of Hartford wrote on Facebook, “The underlying motive of these sacrilegious attacks is clear: to intimidate and instill fear in the hearts of those who worship Christ.”

“However, our cherished Catholic faith has survived for 2,000 years in the faces of many different oppressors, and it is not about to yield now,” the Facebook post continued. “Therefore, we remain unafraid and resolute in our faith, and we will pray for a conversion of the hearts of those who wish to terrorize us.”

The archdiocese, led by Archbishop Leonard P. Blair, added that it was not answering hate with hate, but instead, “these attacks make our love and unity stronger, and our prayers ever more steadfast. For as we learn in John’s Gospel, we cannot truly love God if we do not love our brother.”

In Ocala, Florida, a 24-year-old man was arrested and charged with attempted murder for setting fire to Queen of Peace Catholic Church. He drove his car into the church and proceeded to light two gallons of gasoline on fire. Parishioners were inside the church preparing for Mass but were able to flee without injury.

A statue of Our Lady, located in Queens, New York, was also vandalized less than two weeks ago. “Investigators said an unidentified person was caught on camera spray-painting ‘IDOL’ on the statue in front of Cathedral Preparatory School and Seminary,” reported the local CBS station.

In Chattanooga, Tennessee, a five-foot-tall statue of Our Lady was beheaded in front of a church. “The statue had been torn off of its pedestal, and its head had been removed,” reported the local ABC station. “Church officials found no other damage on the property.”

Jim Wogan, director of communications at the Diocese of Knoxville, commented, “We don’t know if this was the targeted desecration of a sacred statue, or some kind of misguided prank, but it hurts. For whatever reason we are living in a very chaotic time and anger seems to be the default setting for people. Our bishop has asked that we live by the example set in the Gospel of Matthew, to treat others as we ourselves would want to be treated.”

Another beheading of a statue, this time of Christ, the Good Shepherd, took place in Miami. “This is an attack on the church,” said Mary Ross Agosta of the Archdiocese of Miami, according to the Miami Herald. “This is not only private property, it is sacred property.”

“This is not something you can trip over and say, ‘Oh, sorry,’” she added. “Someone did this intentionally.”

Earlier this month in Boston, a statue of the Blessed Virgin Mary was set on fire. Dozens of Catholics, including many members of religious orders, attended a prayer vigil in front of that statue on Wednesday, praying for the perpetrator. “We’re prayerfully saying to this person or persons: We love you. We forgive you. And we are here to serve and help you in any way you may need. This is why we’re here primarily,” said Father John Currie, the local pastor.

Yesterday, CBS Boston also reported, “A trash can was found on top of a Blessed Virgin Mary statue in Dorchester on two separate occasions last week…It happened at Saint Teresa of Calcutta Parish in the overnight hours between July 11 and July 12 and again before the morning of July 16. Trash was also dumped on the property.”