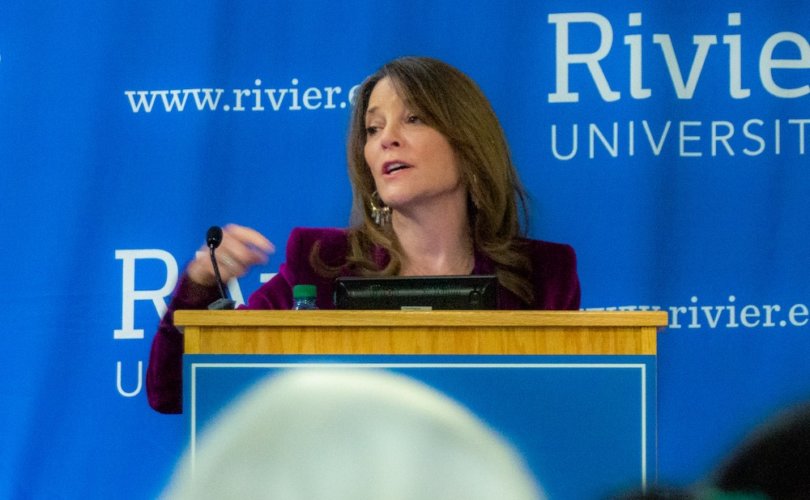 July 10, 2019 (LifeSiteNews) – She’s not yet even a blip in RealClearPolitics’ polling averages of the crowded 2020 Democrat primary field, but “pop religion” author and speaker Marianne Williamson has piqued the curiosity of liberals and conservatives alike.

According to a February ABC News profile, Williamson is a motivational speaker and author of a dozen books rooted in New Age spirituality, who rose to prominence in the 1990s as a recurring guest on Oprah Winfrey’s talk show.

A standard-issue pro-abortion, pro-LGBT progressive who unsuccessfully ran for Congress in 2014, Williamson says she’s running for president because America needs a “moral and spiritual awakening” more so than “just a political mechanic.” For months she faded into obscurity among a primary field that currently contains 25 Democrats, but is enjoying an uptick in attention following the first Democrat debates.

Salon’s Ashlie Stevens dubbed Williamson the “bonkers break-out character” of the debates for her unusual, albeit brief, performance. It was then that she said her first call as president would be to tell New Zealand’s Prime Minister, “girlfriend, you are so wrong” about making her country “the best place in the world for a child to grow up” because “America is going to be the best place.” She also promised to defeat President Donald Trump by “harness[ing] love for political purposes.”

Williamson’s name was the most searched of all the candidates on Google following the debate, The Hill reports. In addition, various old tweets of Williamson’s resurfaced as a source of online mockery for their bizarre New Age sentiments:

When enough minds are vibrating on a high enough level, then all lower thought forms will fall of their own dead weight.

The entire universe is literally conspiring to give you an amazing day today. Co-conspire.

If you want a simple explanation for what's happening in America, watch AVATAR again.

Visualize the oil spill plugged. Close your eyes for 5 minutes and see angels coming over it, filling it with sane and sacred thoughts.  #fb

The chief source of Williamson’s philosophy appears to be the book A Course in Miracles, a purported “complete self-study spiritual thought system” which “teaches that the way to universal love and peace – or remembering God – is by undoing guilt through forgiving others.”

The California-based Foundation for Inner Peace claims the book was “scribed” by Columbia psychologist Helen Schucman from divinely-inspired dreams she took as a “special assignment I had somehow, somewhere agreed to complete,” to “provide a way in which some people will be able to find their own Internal Teacher.” According to the New York Times, Schucman “believed she was channeling new revelations from Jesus Christ himself.”

Williamson credits the book as her “path out of hell” when she read it while struggling with a recurring case of bronchitis and depression. She began teaching courses on it in the 1980s, and in 1992 published her first book, A Return to Love: Reflections on the Principles of A Course in Miracles.

“Before the Course, I felt like I was on a desperate journey to find God, but as much as I climbed up this huge flight of stone steps in front of a cathedral, my knees bloody and my elbows bloody, the cathedral door was locked,” she told the Times. “And when I read the Course, I thought I understood the key.”

While virtually nobody expects Williamson to make it onto a future Democrat ticket, and many dismiss Williamson’s brand of spirituality as the sort of fringe silliness that’s long been popular in certain left-wing circles, others argue the theology of A Course in Miracles is harmful to a proper cultural understanding of faith, and her candidacy could help popularize it.

The text can be tempting to “nominal Christians in the church who have recognized the bankruptcy of theological liberalism and desire more spiritual ‘reality’ in their lives,” the Christian Research Institute (CRI) warns, but ultimately “indoctrinates its students in Eastern metaphysics and human potential psychicism, while it specifically insulates them against biblical revelation and true Christianity.”

The “proper” attitudes advocated in the book include the “rejection of biblical understandings about such issues as sin, guilt, and atonement” while accepting “New Age occult teachings, such as pantheism (All is God, God is All) and psychic development,” CRI explains. “In biblical teaching, the Atonement is based on the fact that man’s sinfulness separates him from God,” but “in the Course, the word ‘atonement’ involves the exact opposite: one is not, and never has been, separate from God.”

“As a result of this distorted theology, the Course’s approach to ‘salvation’ lies in understanding that no one requires salvation in the biblical sense because all men and women are already divine,” CRI adds. “‘Sin, guilt, death, judgment, propitiatory atonement, and other biblical doctrines are viewed as ‘attack’ philosophies by the Course; that is, they are concepts that supposedly stand in the way of spiritual ‘progress’ and severely damage the realization of our ‘true’ divine nature.”

Williamson has one daughter, India, whose paternity she has never publicly disclosed.

Some conservatives have advocated donating to Williamson’s campaign for the purpose of keeping her in future debates to embarrass the Democrat Party and for her entertainment value.