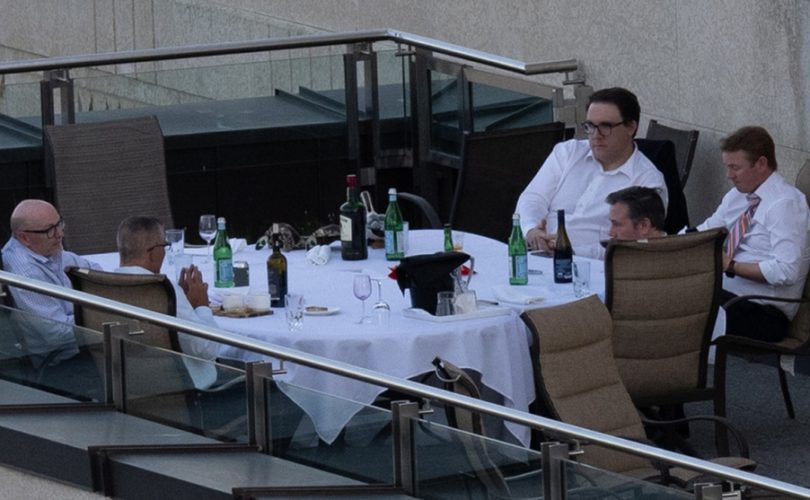 EDMONTON, Alberta, June 7, 2021 (LifeSiteNews) – Internal party angst is growing against the “hypocrisy” of Alberta Premier Jason Kenney after he allegedly broke the same COVID-19 rules he has fiercely enforced for more than a year.

Photos of the dinner, which took place on June 1, were sent to multiple media outlets from an “anonymous” individual who took the photos from a nearby building.

The photos of Kenney and his minister’s rooftop dinner show attendees in close proximity to each other, as well as people walking in and out of the building, with none of them wearing masks, although they are not mandatory outdoors.

Dining in an outdoor patio is only allowed for up to four people from the same household.

After news spread of the dinner, members of Kenney’s United Conservative Party (UCP), Independent MLAs and those from the opposition NDP blasted the event for its “hypocrisy.”

“Looking at these photos it seems clear to me that several health restrictions were violated. Much of the public concern about this incident has been about the hypocrisy of senior officials breaking their own rules. I can certainly understand these concerns,” wrote Airdrie-East UCP MLA Angela Pitt, who is also the deputy speaker of the legislature, on her Facebook page.

“The Premier had a restaurant dinner on his patio with seven friends, and it remains unclear to Albertans why a restaurant owner can't have larger groups on their patio. I am calling on the Premier today to make the rules more consistent, to give businesses fairness, and to allow restaurants to safely operate in the same fashion in which the Premier just portrayed.”

Shortly after Pitt’s statement, Independent Alberta MLA for Cypress-Medicine Hat Drew Barnes, who was booted from Kenney’s governing UCP in May along with MLA Todd Loewen, said Kenney needs to resign because of the rooftop dinner.

“Like Todd Loewen, this is another example of a principled, hardworking constituency conservative MLA hearing overwhelmingly from Albertans that Jason Kenney’s entitlement, hypocrisy and refusal to listen have reached a breaking point,” said Barnes, MLA for Cypress-Medicine Hat.

— Article continues below Petition —
PETITION: No to mandatory vaccination for the coronavirus
Show Petition Text
1081961 have signed the petition.
Let's get to 1100000!
Thank you for signing this petition!
Add your signature:
Show Petition Text

“Kenney needs to resign, and all Albertans need to get back to building a free, prosperous Alberta for our communities, families and children.”

Over the weekend, two of Kenney’s cabinet ministers — Leela Aheer, Minister of Culture, Multiculturalism, and Status of Women, and Minister of Community and Social Services Rajan Sawhney — demanded that Kenney apologize for the rooftop dinner.
In a press conference today, Kenney offered an apology for his rooftop meal.

“I regret the perception this has created. I truly regret it. I take full responsibility,” said Kenney.

Peter McCaffrey, president of the Alberta Institute, said he has no problem with Kenney dining. It’s just that as leader of the province he was the one who enacted the laws that businesses were forced to follow.

“Kenney's defence essentially boils down to him thinking what he was doing made sense and was safe. I agree, it did! The problem is, the laws he's imposing on businesses and restaurants around the province *don't* make sense,” tweeted McCaffrey.

Photos of the dining event also sparked online ridicule and outrage, as many businesses have been forced to close due to severe COVID-19 lockdowns that have kept Alberta under lock and key for more than six months.

“While they send out the police to arrest pastors and seize church properties, they ignore the very rules they punish others for questioning. It’s over, @jkenney. Open up everything now and leave people alone. #cdnpoli #EndTheLockdowns,” tweeted Independent MP Derek Sloan.

The dining event took place in the penthouse suite of the old Federal building in Edmonton, Alberta, which is used as a government office.

In 2014, the top floor suite was nicknamed the “Sky Palace” due to then-conservative Alberta Premier Alison Redford attempting to convert it into a high-end suite complete with bedrooms and lavish furnishings.

After Redford was found out, the 11th floor suite became a symbol of political excess, and her plans were halted. It now is used as a boardroom area, but it is licensed to serve alcohol and cater food.

Last Thursday, Kenney claimed that no rules were broken and that he was fully compliant with the recently relaxed COVID-19 rules that came into effect last Tuesday, allowing for up to 10 people to gather outdoors.

In the Alberta Legislature last week in response to a question from the NDP opposition about the rooftop dining event, Kenney claimed that a large bottle of whiskey photographed on the table was a “budget” liquor, despite the fact such a bottle goes for about $50.

“It’s a nice Irish whiskey, but it's not the finest,” said Kenney, adding “It’s a budget liquor.”

According to a spokesperson for Kenney, the dining event was a “working dinner” and came at no taxpayer expense.

A “Fact Check” report from the Alberta publication the Western Standard found that Kenney and the other attendees of rooftop dinner potentially violated 18 of their “own regulations, and eight counts of violating their own guidelines.”

The Western Standard reported that while the meeting would be most likely classified by Alberta Health Services (AHS) as an “outdoor patio dining,” which means it would have been illegal due to their being more than four people there, the government could say it was an “outdoor social gathering.

Recently, in an unprecedented political move, 17 UCP MLAs blasted their party leader and premier for taking the province back into a severe COVID-19 lockdown.

Under Kenney, three Christian pastors have been jailed — the only ones in Canada — because they defied COVID-19 health rules regarding church services that limit congregation size. Alberta currently allows only 15 percent capacity of the building and mandates physical distancing and mask wearing.

In a recent extraordinary move, the board of a Constituency Association (CA) of UCP for Barnes voted 90 percent in favor of demanding that the province’s Premier reinstate him.