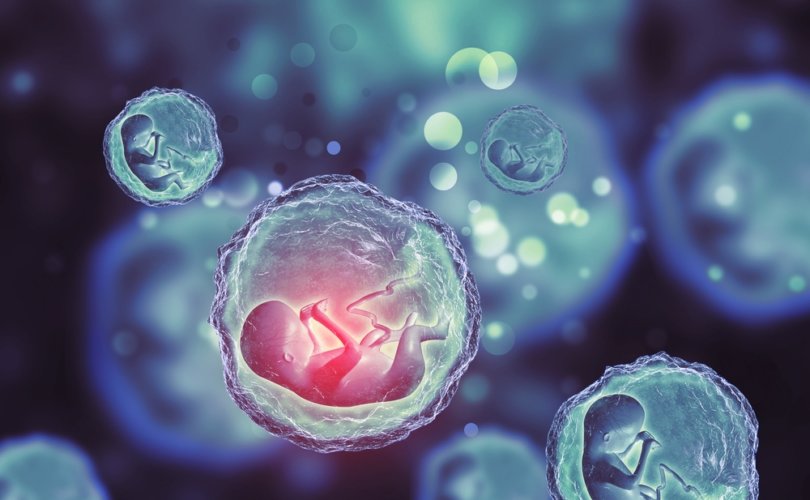 SKOKIE, Illinois, June 4, 2021 (LifeSiteNews) — A group of scientists have called for an end to rules preventing research on unborn babies older than 14 days gestation.

Last month the International Society for Stem Cell Research (ISSCR) published new guidelines expanding research on living human embryos. British geneticist Robin Lovell-Badge celebrated the recommendations in a May 26 article published in the online Nature magazine. The article is misleadingly entitled, “Stem-cell guidelines: why it was time for an update.”

“The updated guidelines, published this week, are the product of a task force, which I chaired,” Lovell-Badge wrote.

“We deliberated over 18 months and more than 100 Zoom calls. We consulted relevant polls and public-engagement projects. The guidelines were then peer reviewed by a similar set of experts.”

Lovell-Bridge said the most “striking” change the Society recommended was “relaxing the ‘14 day rule’, the limit to culturing intact human embryos in the laboratory, which has been written into law by some dozen countries, including the United Kingdom and Australia.”

According to current rules, after two weeks of being experimented on, human embryos must be killed. According to Lovell-Bridge, this is because the “first signs” of their central nervous systems would appear shortly afterwards. He argued, however, that although the limit has previously “served science well,” it prevents “study of a critical period, between 14 and 28 days, when the beginnings of tissues are established.” This is to say, he believes scientists should be allowed to experiment on unborn babies whose brain, heart, and spinal cord have begun to form.

Apparently, scientists can already use stem cells to grow “structures” very much like human embryos, and Lovell-Bridge believes that it would be helpful to compare them to real human embryos to “assess their relevance” and “use them for experiments that would otherwise require embryos.” Here the scientists seem to be arguing that some human embryos should be subject to experimentation so as to spare … other human embryos.

Lovell-Bridge believes that the “14-day rule” helped research that was “essential” for “many assisted-conception techniques” — that is, artificial conception — to flourish despite “strong opposition, notably from religious groups.” And there were “even” some scientists who were “reluctant to discard” this “workable compromise.” But, he says, the rule was composed 40 years ago, when it was impossible to keep an embryo alive for experimentation for more than five days. Times have changed.

Many religions, notably Catholicism, believe that innocent human life is sacred from conception until natural death. All human beings have the right to live and possess an inherent dignity by virtue of their participation in the human family, made in the image and likeness of God.

In Donum Vitae, promulgated in 1987, the Congregation for the Doctrine of the Faith completely vetoed harming living embryos or violating their integrity, saying:

Medical research must refrain from operations on live embryos, unless there is a moral certainty of not causing harm to the life or integrity of the unborn child and the mother, and on condition that the parents have givers their free and informed consent to the procedure. It follows that all research, even when limited to the simple observation of the embryo, would become illicit were it to involve risk to the embryo’s physical integrity or life by reason of the methods used or the effects induced. As regards experimentation, and presupposing the general distinction between experimentation for purposes which are not directly therapeutic and experimentation which is clearly therapeutic for the subject himself, in the case in point one must also distinguish between experimentation carried out on embryos which are still alive and experimentation carried out on embryos which are dead. If the embryos are living, whether viable or not, they must be respected just like any other human person; experimentation on embryos which is not directly therapeutic is illicit. (29) No objective, even though noble in itself, such as a foreseeable advantage to science, to other human beings or to society, can in any way justify experimentation on living human embryos or fetuses, whether viable or not, either inside or outside the mother’s womb.

Early in his article, Lovell-Bridge acknowledged that people find such embryonic exploitation as creating human-animal hybrids “scary and uncomfortable.” He wrote that the International Society for Stem Cell Research has offered a “solution” to opposition to research on older embryos by requiring “review and approval of proposals” to study them.

“Importantly, each proposal should be judged individually, on whether the research is justifiable in terms of the value of the information obtained, whether there are alternative ways to obtain the information and so on. The more embryos that would be used, or the longer they would be kept in culture, the higher the bar,” he wrote.

This is unlikely to placate people who hold the lives of every unborn human sacred, however. The same day Lovell-Bridge's article was published, Students for Life Action President Kristan Hawkins called the ISCCR recommendations to allow experimentation on older embryos “abhorrent.”

“Just because something can be done isn’t an argument for allowing it to be done,” she added.

“This kind of policy undermines the respect we owe to human beings not yet born and further empowers abortion vendors who profit by degrading preborn life,” Hawkins continued.

“Allowing research on human life opens hideous doors that historically we have fought to close. Congress and those leading our scientific communities should end this type of research before it begins.”