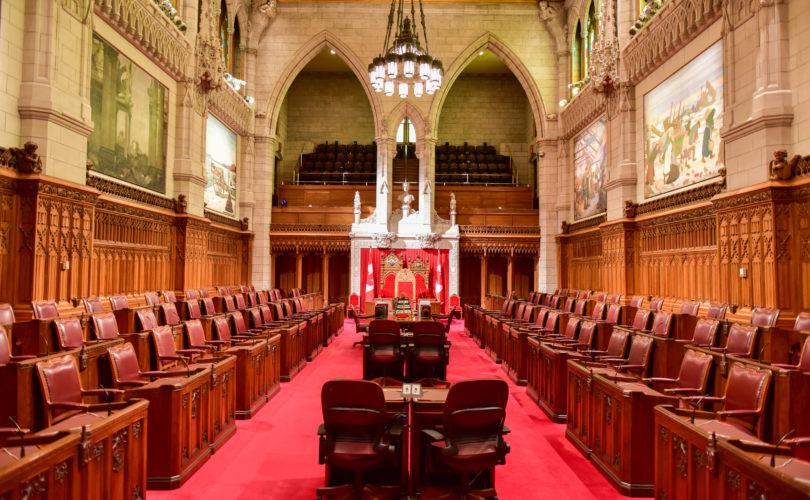 OTTAWA, Ontario, July 5, 2021 (LifeSiteNews) – Two controversial bills championed by Canada’s ruling Liberal Party under Prime Minister Justin Trudeau failed to pass the nation’s senate during the last day of debate on June 29, before the upper chamber broke for the summer.

The contentious internet censorship Bill C-10 was sent to committee by Canada’s senate before the summer recess, meaning for now at least it has not become law.

Also failing to make it through the senate before the summer break was the controversial Bill C-6, or “conversion therapy” ban. This bill would punish those helping children with gender confusion or unwanted same-sex attraction with jail time of up to five years.

Should a late summer or fall election be called by Trudeau, as is anticipated, before the senate is scheduled to reconvene, the bills and all others not passed will die.

Should an election not be called before the senate is scheduled to return in mid-September, C-10 and C-6 will still face further study, meaning their possible passage with Royal Assent is potentially months away.

During the final debate of Bill C-10, well-known Canadian author and Senator David Adams Richards, who was appointed by Trudeau in 2017, took aim at the controversial legislation in an impassioned speech.

“I will always and forever stand against any bill that subjects freedom of expression to the doldrums of governmental oversight, and I implore others to do the same,” said Richards.

— Article continues below Petition —
PETITION: Reject government control of the internet in Canada
Show Petition Text
6565 have signed the petition.
Let's get to 7500!
Thank you for signing this petition!
Add your signature:
Show Petition Text

Dr. Michael Geist, law professor at University of Ottawa and Canada Research Chair in Internet and E-commerce Law, commented that debate in the senate regarding Bill C-10 “was marked by consistent calls for more study” on the bill.

Geist also took note of Richards’ speech, saying it took “one of Canada’s most celebrated authors” to set the “record straight and bring the debate to a close” regarding Bill C-10.

Bill C-10, known as “An Act to Amend the Broadcasting Act,” has drawn immense fire for its targeting of user-generated content on social media platforms.

Canada’s House of Commons passed Bill C-10 while most Canadians were asleep in late June. The bill had the full support of Liberal, NDP, and Bloc Québécois MPs. Only Conservative Party of Canada (CPC) MPs voted against the bill. Two independent MPs also voted against the bill, Derek Sloan and former Liberal Minister Jody Wilson-Raybould.

Canadian senator Pamela Wallin took aim at how Bill C-10 was pushed through Canada’s House of Commons. She said it was passed in “kangaroo-court” style, and in late June vowed to fight its passage in the senate chambers.

“I will do everything I can to make sure this bill isn’t rammed through. Standing up to Bill C-10 is standing up against censorship and standing up for free speech. If we don’t say NO now, it will be too late,” tweeted Wallin on June 22.

Wallin addressed those who supported opposing Bill C-10 shortly after the senate closed for the summer.

“Heartfelt thanks to the many thousands of you who believe in free speech and oppose any attempt at censorship. Your messages of support as we resisted Bill C-10 were meaningful. The bill has now been sent to committee and if there is no election, we will take it on in the fall,” tweeted Wallin.

According to a Globe and Mail report, some senators are looking to possibly reconvene in the summer to look at Bill C-6.

The Globe and Mail says that there are multiple groups of senators who have requested the upper chamber be recalled to pass Bill C-6, after being criticized for not doing so before the summer break.

For the senate to be recalled during the summer, senate speaker George Furey would have to agree, and as of publication time, no announcement has been made.

Bill C-6, often referred to as a “conversion therapy” ban, has been called a “disgraceful” attack on parental freedoms by family groups.

The bill passed Canada’s House of Commons in late June with full support from the Liberal, New Democrat, Green, and Bloc Quebecois MPs. Only 63 Conservative Party (CPC) MPs voted against the bill, with 51 voting in favor of it.

Ahead of the vote on Bill C-6 in Canada’s House of Commons in June,  Sloan held a press conference with a lineup of licensed psychologists and others who spoke out in opposition to it.