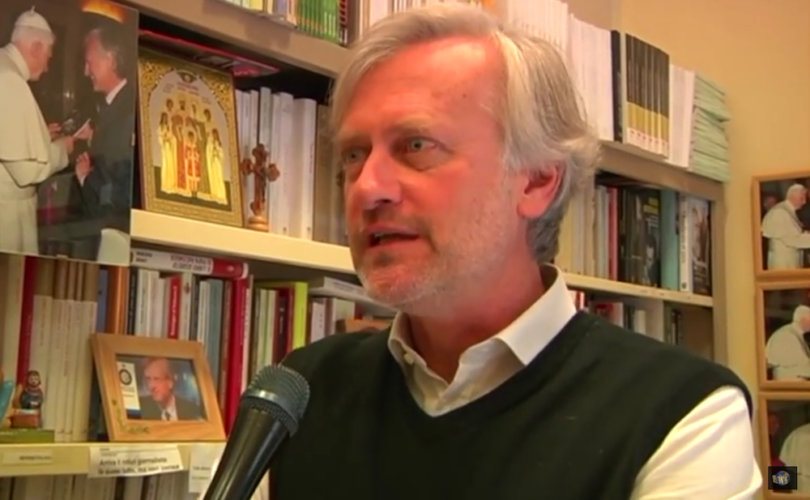 January 31, 2017 (LifeSiteNews) — An Italian author who was supportive of Pope Francis at the beginning of his pontificate has changed his mind during the past few years and grown cold toward his leadership of the Catholic Church.

Aldo Maria Valli, a Vatican journalist for the Italian TV station TG1, spoke with LifeSiteNews about his latest book, “266 Jorge Maria Bergoglio, Franciscus” in which he lays out his initial fondness for Pope Francis that has faded over time.

“My perplexion culminated after Amoris Laetitia,” Valli explained during an interview in which he touches upon Islam, ecologism, the superficiality of Francis, and how the Church betrays her mission.

LifeSiteNews: Mr. Valli, what was the intention of writing this book and what prompted it?

Aldo Maria Valli: I wanted to express my perplexity that arose from some parts of the teaching of Francis, especially after Amoris Laetitia. To sum them up: on the one hand, I see a certain superficiality, on the other hand an ambiguity.

I especially see superficiality in three distinct arguments: the unity of Christians, the acceptance of migrants, and the dialogue with Islam. With regards to the unity of Christians, when the Pope asks to leave out some theological aspects in order to concentrate on things that Christians of different confessions have in common, he seems to me to be risking wanting to divide by zero. The Church is not a welfare office, or at least that is not her first role. If everything is reduced to social work, without awareness of theological fundamentals, then there is risk to dilute the faith and to cut away the basis of everything. Furthermore, without theological depth the dialogue also remains generic “benevolence.”

We should never lose sight of the fundamental question of truth.

In regard to migrants, it seems to me that the Pope is too generic when he says to open the doors without thinking about the problem of the defense of the Christian identity and the European identity especially. It is true that Europe is composed of different cultures, but it is also true that there would be no Europe – as we know it today – were it not for Christianity, and also today’s Europe has known moments in history during which it had to defend itself against Islam. Concerning dialogue with Islam, I think that the Pope is superficial when he affirms that extremists exist in all religions. This is surely true, but it is equally true that Islam has a particular problem with violence and the origins of the problem are within the Koran. It is a given fact that we cannot ignore and the best way of helping our Muslim brothers is to make them realize it.

The ambiguity lies mostly with Francis’ teaching of mercy. God is without doubt a merciful father, but it is not possible to separate mercy from justice. If we do so, then we risk transforming mercy into God’s duty and the obtainment of mercy into man’s right. It is not like that. Mercy is a gift offered for those who are open to conversion, to penance, and to recognition of their sin. Furthermore, mercy is not the soft slap of a father who forgets all. If it were like that, then the principle of personal responsibility would be defeated and liberty would be self-abased. We have to ask ourselves in the end: a generic psychological-physical well-being or the salvation of the soul? If we do not ask for salvation, then we risk putting man in the center, not God.

LifeSiteNews: Did you favor Pope Francis after his election to the papacy? Did something in your opinion of him change?

Valli: Yes, in the beginning, I was very happy with the election of Francis because I thought that for the Church in Europe and the West it would be helpful to see reality from a different point of view than usual. I thought that the South American Pope could give freshness and a youthful spirit to the Church as the Church in the West seemed to have grown tired. Step by step, I had to realize, though, that in Francis there exist a kind of inconclusiveness, too much doctrinal confusion, and a certain flattening of himself to the dominant mentality of the world, as we see in Laudato sì. My perplexity exploded after Amoris Laetitia.

LifeSiteNews: When Pope Francis says that each one has his idea of good and evil, and has to follow it, where does this opinion of the Pope take root?

Valli: I believe that the Pope essentially wants to say that in the religious field and in the faith, we cannot lie to ourselves; but once more his reasoning seems to be superficial and ambiguous. The Church does not just have the right but the duty to show the difference between good and evil. She has the duty to teach that there is an objective good and it can be followed in the light of the Gospel. Today, we live immersed in a mentality that is fully deprived of the normal points of moral reference. From a moral standpoint, humanity has skidded. The Church is the last bulwark still standing in defense of the distinction between good and evil and for the moral education of the person. If then the Church also gives in to the “weak thought” and serves the exigencies of a “diluted society,” then she betrays her own mission.

LifeSiteNews: One of the goals of the Pope seems to be to integrate all into the Church. How so? Is that possible?

Valli: Yes, it is certainly close to the heart of the Pope to integrate all, but I see that the results are not at all brilliant. Those who are far away from the Church stay away and they get the impression that they are right. Those who are close grow more and more perplexed. I do not expect confirmation of lay dogmas (I think of ecologism, feminism, or radical subjectivism) from the Church. I expect instead an alternative vision, presented with courage. When the Pope receives too much applause from the world, then something is not right.

LifeSiteNews: You talk about a “good” and “bad” relativism in your book. Can you explain what you mean by that?

Valli: In a few words, “good” relativism is that which brings me to see the reasons of others and brings me into an honest discussion about the great questions of life, also cultivating healthy doubts. “Bad” relativism is when I come to believe that there is not truth, or an absolute, and that for man only that which can be empirically proven can be true, as if human reason was incapable of receiving the absolute, as if transcendence has to pertain to the human mind. These are questions linked to the teachings of Benedict XVI and are truly grandiose; unfortunately, we have forgotten the answers all too quickly.

LifeSiteNews: What will happen with the papacy and the unresolved ambiguity of Amoris Laetitia in the near future?

Valli: Honestly, I don’t know. I see that in communities there is a certain confusion and that priests and bishops who are not disposed to follow the line dictated by Santa Marta run into serious problems. It is curious that all this happens in exactly that pontificate that has made mercy its distinctive feature. I am afraid that after the time of Francis, it will be necessary to have a restorative pontificate to bring order back into doctrine and pastoral care. But we shall not lose hope in the Holy Spirit!