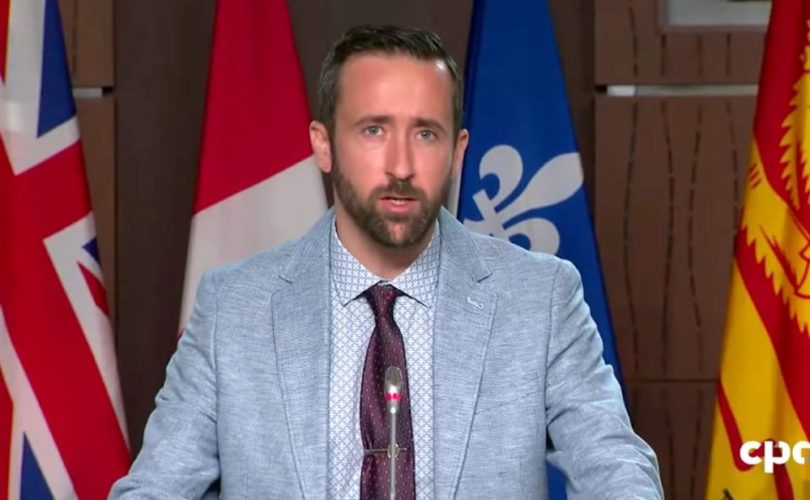 (LifeSiteNews) – On Monday, Ontario Party leader Derek Sloan sat down with LifeSiteNews to discuss his bid to be Premier of Canada’s largest province in the coming June election.

Sloan is a former MP for the Conservative Party of Canada, who was ousted from the party after the 2020 leadership race based on fallacious claims that he had willingly accepted a donation from a white supremacist.

He addressed the issue in the interview. “The excuse that was given was that I received a donation from an unsavoury character,” he said, and added that it was a “bizarre accusation” considering that the donations went through an official party software platform, and he received “13,000 separate donations.”

“There’s many people that donated to us that that I don’t know personally and I don’t know much about them,” he said. “So this was a red herring. It was used as an excuse to eject me.”

Looking for new opportunities to engage in the political scene, Sloan decided to run for the Ontario Party, a party established in 2018 as an alternative for conservative Ontarians who are fed up with the status quo.

One of the issues that Sloan and his party intend to fight is the growing push for the establishment of Critical Race Theory (CRT) in Ontario schools and institutions.

He said that “critical race theory is basically a far left narrative,” which he called “almost an alternative to religion because it has kind of mystical value sets, beliefs and even concepts similar to things like, you know, original sin in the sense that some people are, you know, irredeemably racist just by virtue of who they are.”

Sloan went on to add that the difference between the “religion” of CRT and Christianity is that Christians have a theology of redemption: “But the difference between this religion and, say, a religion like Christianity is that there’s no divine grace. There is no there is no way to be really relieved from the tremendous burden of guilt and stain of corruption that is that is put on people. So whereas in Christianity, we are given grace through Jesus Christ, in this particular religion, there’s no way out.”

The Ontario Party went on to call foul on the trend of liberal politicians blaming “everything on… European colonizers.”

He said that “there’s no question” that “regrettable things… have been done,” but an inaccurate portrayal of Canadian history “gives the impression to someone who doesn’t know any better that somehow, you know, the Canada or even the U.S. are like, you know, the worst countries ever… that is simply not the case.”

If his party gets seats, Sloan intends to go after the “bubble zone” law that stops Christians from praying close to abortion clinics peacefully.

“Our policy would be to repeal the bubble, the bubble zone law period,” he declared. “You know, it doesn’t make sense. We live in a free country. People should be able to peacefully protest on public property.”

He added that another thing needed for the pro-life movement is “more funding and more options for the crisis pregnancy centres.”

“That’s another policy plank that we approve of,” he said.

In addition, Sloan said that “doctors should not have to go against their conscience in terms of either providing a referral or in any other way participating in MAID [assisted suicide] or abortion.”

Over the next couple of weeks the party will be unveiling candidates in most ridings in the province, and there are still spots open for anyone looking to run.

“I think there’s certainly a chance for some seats to be won. And there’s a chance for even greater things down the road,” he said.