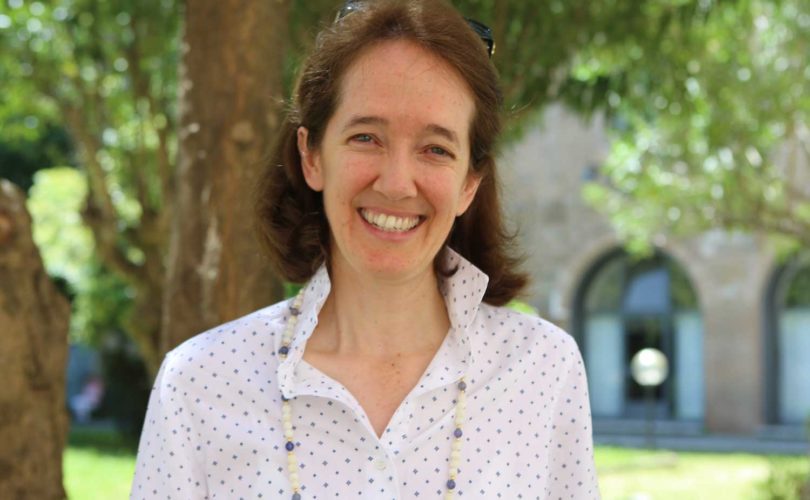 ROME, May 3, 2019 (LifeSiteNews) —The Trump administration’s pro-life policies are a shining example for Europe, while US Democrat politicians appear to be serving at Satan’s altar by supporting legalized infanticide, the president of the annual Rome March for Life has said ahead of this year’s event.

In an interview with LifeSite, in the lead up to the May 18 march through the heart of the Eternal City, Virginia Coda Nunziante praised the Trump administration’s concrete action to protect the most vulnerable among us. Pointing to his cutting of funding for abortion and his live addresses to participants in the annual March for Life in Washington, she said the European pro-life world “would like our politicians to have his courage in this specific respect.”

Yet the “decisive factor,” she said, will be the appointment of another pro-life judge to the Supreme Court. “If in the next few years the highest judiciary in the United States takes a pro-life stance, it will be a turning point in the United States and this will have a strong impact in Europe.”

Asked how she views the New York legislature’s recent legalization of abortion up to nine months, and why she believes evil is accelerating at the present time, Coda Nunziante said: “Abortion is the blood sacrifice that the devil asks of today’s societies, and when you try to hinder, reduce or fight it, the devil unleashes even more violent campaigns in order not to lose ground.”

“What happened in New York and in other American states, in my opinion, is a response that  Democrats wanted to give to President Trump’s pro-life policy,” she said. “They wanted to show that abortion is their war-horse and that, if the President were to go ahead with his pro-life policies (for example by appointing a new member of the Supreme Court), they would not be unprepared.”

Speaking of the particular challenges facing Italy, which has one of the lowest birthrates, Coda Nunziante said changing laws can seem “impossible” from a human point of view. But, she added, “with God all things are possible.”

What is essential is to “raise the banner of Truth, without compromise, in defense of life and the family,” she said. “Truth, like Good, has an intrinsic power to spread and conquer souls, the final victory will be ours because 'God has overcome the world' (cf. Jn. 16:33).”

Here is our interview with Virginia Coda Nunziante head of this year’s Rome March for Life.

LifeSite: Virginia, you have spoken of the annual March for Life in Washington, DC as the “mother” of all marches. How significant for Europe and Italy in particular is the US’s role as a beacon of life?

Coda Nunziante: The example coming to us from the United States is truly enlightening. What the March for Life has achieved in the more than 40 years is there for all to see: an entire generation of young people is becoming more and more pro-life and with their enthusiasm and determination the destiny of the country will change. Europe, but principally Italy — which is the country with one of the lowest birth rates — must take what happens overseas as an example, to put the theme of life back at the center of politics and public policy, both in its action against abortion and in its action to promote the birth rate.

What is your impression of the Trump Administration’s policies on life? Is he seen as a pro-life president in Europe?

Quite aside from any judgment about the man, there is no doubt that the Trump administration has given great attention to the issue of life. I cannot imagine a President in any European country who, as soon as he is elected, cuts public funding for abortion. Not only that: his live addresses from the Oval Office, to all the participants in the annual March for Life, also shows his particular attention to this theme. Let’s not forget that he also sent Vice-President Pence to the square for two years in a row to speak on stage at the March for Life. In the European pro-life world, President Trump is considered pro-life, and we would like our politicians to have his courage in this specific respect. However, the decisive factor will be what happens within the Supreme Court, especially if President Trump is re-elected. If, as I hope, in the next few years the highest judiciary in the United States takes a pro-life stance, it will be a turning point in the United States and this will have a strong impact in Europe.

The New York legislature recently passed a bill legalizing infanticide (abortion up to nine months with the fate of a child who survives being left up to the woman and her doctor), to the cheers of Democrats. Similar bills have been introduced by Democrats in other states? How do you explain the acceleration of evil? And how would the “average Italian” think of this sort of law?

What happened in New York and in other American states, in my opinion, is a response that the Democrats wanted to give to President Trump’s pro-life policy. They wanted to show that abortion is their war-horse and that if the President were to go ahead with his pro-life policies (for example by appointing a new member of the Supreme Court), they would not be unprepared. Abortion is the blood sacrifice that the devil asks of today’s societies, and when you try to hinder, reduce or fight it, the devil unleashes even more violent campaigns in order not to lose ground.

During my travels in Italy, every time any reference is made to what was legalized in New York, a shiver of horror runs through the room: people are incredulous that such atrocities are committed. But unfortunately, it is only a matter of time: if we do not react immediately we too will accept abortion in the ninth month and infanticide.

This year marks the 9th March for Life in Rome. What signs of growth do you see, and will the march have a particular focus and theme this year?

After nine years we realize that the March for Life has become a strong reality, an annual appointment that no one who is pro-life can miss. Our strength lies not so much in the number of people who take to the streets, but in the consistency and perseverance of a battle that we continue to fight year after year, without falling back, but instead always gaining ground. The most important result that’s been achieved, in my opinion, is to have brought the theme of life, from conception to natural death, back to the center of public debate. We want to influence the political world to change the laws of our country, and with perseverance and immense confidence in God’s help, we will achieve this goal. This year, in addition to abortion, we will focus on euthanasia because a draft law is already under discussion in the Italian Parliament. The March has also become (and we hope it will increasingly be) an international event, a meeting of prolife leaders from all over the world. This year the march will be preceded and followed by two important international conferences, organized respectively by Voice of the Family on May 16-17 at the Angelicum, and by Jahlf (John Paul II Academy for Life and Family) on May 20-21, at the Hotel Massimo d’Azeglio.

The March for Life is principally a lay initiative. What level of support have you had from the Italian Bishops as well as prelates from abroad?

The March for Life, as in other countries, is an expression of citizens who care about the defense of life. The organizing committee for the March, however, is made up of Catholics who want to have good relations with the ecclesial world. This year, for the first time, we will have a diocesan bishop who will speak from the stage. In the square there will also be other bishops and cardinals. Among them, of course, will be Cardinal Raymond Burke who is present every year. As an American, he knows what it means to “march” for life, and he is a great example for all of us. Every year there are also priests, religious sisters and other religious from various institutes. But what is most important for us is the spiritual support that priests and laity promise us through prayer. The Hour of Eucharistic Adoration that takes place in a Roman Church on the eve of the March is very important to us. This year it will take place in the parish church of Santa Maria Campitelli, with several cardinals in attendance.

What particular challenges is Italy facing right now on the pro-life front?

Italy is currently facing two legislative challenges: the euthanasia law and the attempt to repeal the right to conscientious objection. But the main challenge is the awakening of consciences: for too many years the country has been subjected to cultural and moral anesthesia and the reaction to unjust laws has been almost non-existent. We must now get busy, shake souls from their slumber and make it clear that it’s up to each and every one of us to react to the culture of death that they want to impose on us. It is necessary to raise the banner of Truth, without compromise, in defense of life and the family. And since Truth, like Good, has an intrinsic power to spread and conquer souls, the final victory will be ours because “God has overcome the world” (cf. Jn. 16:33).

What are your hopes for this year’s March?

We hope to see a greater attendance every year at the March, but beyond the numbers, what really matters is the strength and determination of the people who take to the streets. Personally, I want more and more people to believe that the defense of life must be carried out without compromise, without half measures. We will ask, as always, for the repeal of the 194 law and the halting of the euthanasia law. All this seems impossible and from a human point of view and perhaps it is. But we know that God can do all things and He asks us only for our effort, our little piece of bread: He will perform the miracle of multiplication when the time comes. The final victory will certainly be God’s, but it will not happen without our participation.

1
World Economic Forum adviser claims the planet no longer needs the ‘vast majority’ of the population
2
Vatican renews Pope’s push for COVID vaccination as an ‘act of love’ in new video
3
Irish Catholic diocese points youth to ‘condoms and lube’ in ‘sexual health’ initiative
4
New CDC COVID guidelines throw out quarantine, allow for benefits of natural immunity
5
America is cracking under the weight of gov’t failures and persecution of patriots
Subscribe to Daily Headlines »