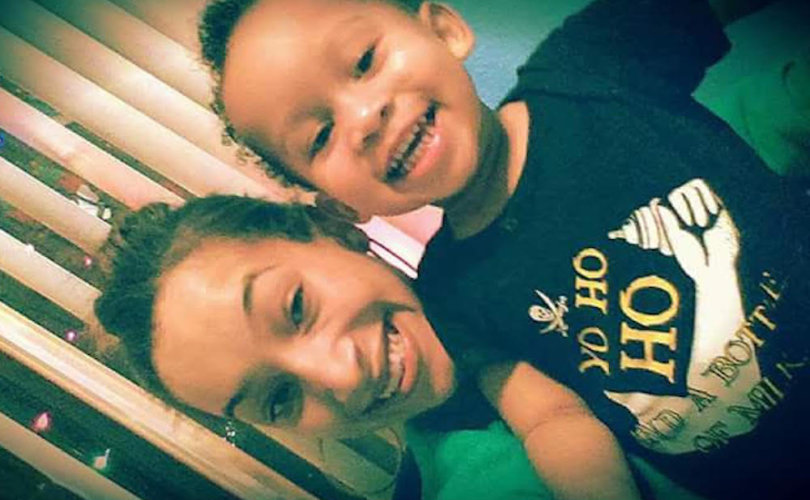 SACRAMENTO, California, April 22, 2016 (LifeSiteNews) – A young California couple is not giving up on their toddler on life support, driven by their love for him and God.

Israel Stinson’s parents Jonee Fonseca and Nate Stinson have a strong sense, and faith, that their son is alive and will wake up one day, something other family members also share.

“Because of our faith we will wait for our son to wake up,” Fonseca told LifeSiteNews.

There are times when they have to think about what could happen, but they don’t spend long pondering it, Fonseca shared, emphasizing, “You have to think in a positive light.”

Two-year-old Israel has been hospitalized since April 1 after a severe asthma attack sent him to the emergency room. After transfers to two other healthcare facilities and Israel suffering a second attack, ending up on life support, the family finds itself locking horns with Kaiser Permanente Roseville Medical Center over his condition and care.

While Israel’s family transferred him to Kaiser with the intent and understanding he would receive continuing care there, the facility has twice conducted studies on him to determine his brain activity without notifying parents, and in the second instance, in direct violation of his mother’s clearly expressed wishes.

“A hospital is somewhere for you to get better,” said Fonseca. “Not somewhere where they just want to get this kid out of his bed.”

She had placed numerous notes around his room advising staff not to perform the tests, stating, “I know what comes next after that, and I’m just not ready to talk about burying my baby.”

“I don’t feel that its anybody’s right to say just because we’re not getting response from the brain right now, that we have to bury him,” she said. “That’s crazy to me.”

“When you are a mother,” Fonseca continued, “and you have a special connection – he’s my first-born son – you don’t give up. My God is telling me something else. Who is a doctor to go against God?”

Fonseca told LifeSiteNews when she felt pressure from a male doctor to perform the second round of tests, she’d said that she wanted to speak to a doctor who was also a mother, because she felt a mother would understand better. The hospital sent a female physician to talk to her.

Fonseca had an appointment for which she had to leave the hospital, and she was asking the staff, if they intended to perform the tests, against her wishes, she wanted nothing to be done in her absence, a specific request she made of the female doctor.

The woman promised Fonseca, telling her “mother to mother” nothing would be done while she was gone, Fonseca recalled. The second set of tests took place in Fonseca’s absence, with Fonseca’s mother present documenting the staff’s actions.

The hospital has declared Israel brain dead and indicated its intent to withdraw life support.

“It really, really hurt me that they went ahead and did them,” said Fonseca.

California law requires a second opinion in cases of brain death, LLDF tells LifeSiteNews, and the legal foundation is working with neonatologist Doctor Paul Byrne, clinical professor of pediatrics at the University of Toledo, who is advising LLDF and the family on finding an in-state doctor to assess Israel.

Fonseca said Byrne has also advised her that Israel’s nutrition had not been sufficient, that the hospital had not been providing him what he needed between a full range of vitamins, fats, electrolytes and protein, something she found suspicious.

“It made me think, ‘Well why haven’t they been doing this?” Fonseca said.

She told LifeSiteNews after requesting that Israel be given what Byrne had advised, the hospital initially agreed to do as she asked, but has since said staff is providing Israel the proper nutrition.

Up until a week ago, Israel would squeeze their hands when they prayed over him or played Gospel music, Fonseca said, and he would also react upon hearing his dad’s voice, once kicking his leg. They saw him take a breath on his own as well, she said.

His condition has not declined since that time, though he hasn’t been reacting to them.

Israel just needs time, Fonseca said, and she is doing what any mother would do by fighting to keep him alive until he has a chance to recover from the asthma attack.

“I wouldn’t be able to sleep at night if I let them take my baby from me they way they’ve wanted to,” she told LifeSiteNews.

Fonseca said regardless of the outcome in their case, she and her family will not stop fighting for her son.

LLDF is providing her information about other possibilities elsewhere for continuing her son’s treatment, she said, and they are ready to go wherever it takes to give their son life.

“If they say I have to go to Africa, I’ll be in the middle of Africa waiting for him to wake up,” Fonseca stated. “Call me crazy, but I love my son.”

“We’re just trying to do everything we can for our son,” Nate Stinson said. “We think he’s got a fighting chance.”

Nate Stinson said his son is a fun, warm, loving child, with a great sense of humor already showing at two years of age.