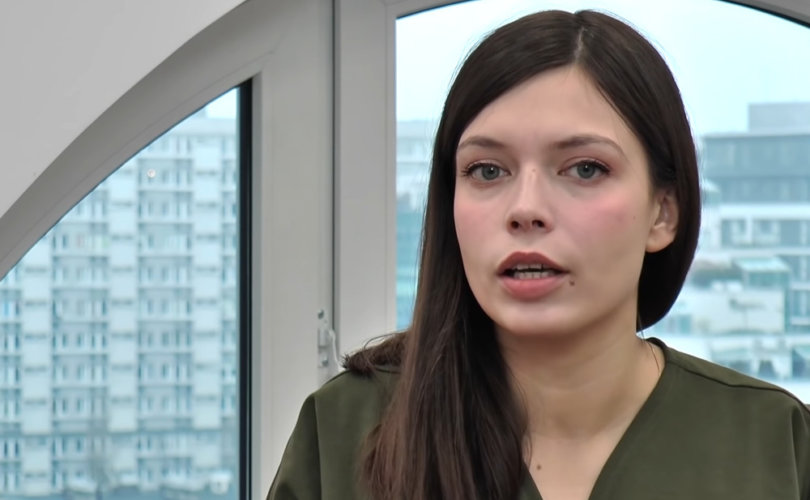 WARSAW, Poland, October 31, 2020 (LifeSiteNews) — Since October 22, when Poland’s Constitutional Tribunal ruled that a law permitting eugenic abortion was incompatible with the nation’s constitution, tens of thousands of Poles have taken to the streets in protest.

The marches and rallies have not been confined to Poland’s traditional market squares. Activists, some of whom carry signs reading “To wojna” (“It’s war”) have intentionally blocked traffic. They have vandalized churches, national monuments, and statues of Pope John Paul II.

In Warsaw, they have also gathered outside the building housing the offices of the pro-life, pro-family Ordo Iuris Institute for Legal Culture.

Yesterday, LifeSiteNews spoke over the phone with Karolina Pawłowska, the Director of Ordo Iuris’ Center of International Law. She explained why both Ordo Iuris and Poland’s Catholic churches are in the cross-hairs of leftist activists, and why so many young people have joined them.

Pawłowska: Hi! Nice to hear you!

LSN: Good to hear you, too. How are you?

Pawłowska: Fine, thanks. We have a somewhat stressful situation because of the protests, but we are of course happy that something has finally changed in our legal system, the ruling of the Constitutional Tribunal.

LSN: We read that the unhappy pro-abortion crowds, Strajk Kobiet [“Women’s Strike”], have been meeting outside Ordo Iuris.

LSN: How often have they gone there?

Pawłowska: They came twice. They came on Sunday, and then they came on Wednesday. There were about 2,000 to 3,000 people.

It was because our organization is very well known in Poland. We are the only professional think tank, a conservative think tank, that is defending the human right to life at every stage. And because we are trying to be very professional, we focus only on arguments, on knowledge, facts, and evidence.

— Article continues below Petition —
PETITION: Stand with Poland for defending the unborn and churches against leftist aggression!
Show Petition Text
3555 have signed the petition.
Let's get to 4000!
Thank you for signing this petition!
Add your signature:
Show Petition Text

[Strajk Kobiet] really don’t like us and try to depict us as a symbol of something wrong. And of course our Institute was involved in the Constitutional Tribunal’s ruling in the sense that we were always saying that eugenic abortion is against the Polish Constitution and against human rights treaties because the right to life is a fundamental right. We also sent the Constitutional Tribunal an amicus brief, our statement in which we, along with other organizations from Europe defending human rights, the right to life and the dignity of every person, asked the Tribunal to rule against eugenic abortion.

LSN: Farther west, we are used to thinking of Poland as a pro-life country, and we thought Poland would welcome this new protection for the lives of Down syndrome babies. Instead, we see these huge protests. Are you surprised?

They have large financing from foreign countries, from foreign organizations, from the Open Society Foundation, George Soros, and, of course, International Planned Parenthood. The financing involved in creating this [pro-abortion] movement has been huge, and that is why they are becoming larger.

They have managed to organize themselves very well in recent years, and of course they do not refer to any arguments or knowledge in their protests, but only to emotions. This is why the protest is so popular among young people, who are all misinformed about what the ruling of the Constitutional Tribunal was about.

LSN: We’re concerned when we see young people in the streets screaming obscenities. They seem like they’re possessed by demons. How is it that the children of the John Paul II generation are behaving like this?

Pawłowska: I think something went wrong with education in Poland, as in many countries, and also something [went] wrong with the condition of families. The family is not as strong as it used to be, and now young people do not have authorities in their parents. Parents are not focused on raising them. Our role [at Ordo Iuris] is to change that situation.

Also, young people always have the tendency to protest something, and this is why it is so easy to use … teenagers in this debate. I think they are cynically used by the organizations of protestors because [the latter] are very well aware that this is the age at which people like to protest, and it is very, very easy to manipulate them.

LSN: Why are they attacking churches instead of courtrooms?

Pawłowska: I think it’s because the Church is a symbol of Polish tradition. The Church is very important in Poland, and it’s a symbol of the older generations the [demonstrators] want to protest against. Of course, it is [also] very easy to attack a church. Priests are not aggressive. They protect themselves, but they are not dangerous to these young people.

It is very sad that Polish people are using these aggressive methods of protesting. I have never experienced such an increase of hate speech. This is something really unprecedented. It’s also surprising that all these institutions that were created to fight so-called hate speech now are silent.

Polish institutions, as well as international institutions, were very loud when we had discussions about so-called LGBT rights. They wanted to interfere in our Polish legal system and legal debate.

Now they are silent while protest organizers, for example, publish the addresses and phone numbers of people who are pro-life. I think it is very, very dangerous for these people, and yet nobody does anything about it. It shows the hypocrisy of the Left, which was advancing the notion of “hate speech” and now is doing nothing.

LSN: Do these young people in the street hate Poland? Do they want Poland to be like New York? Do they want “Sex and the City” to be the reality of Polish life?

Pawłowska: Yes, I think it’s something like that because they are manipulated by the vision that comes from the media, especially from social media, about how it is great to live in different countries, different cities. They don’t want to see the problems these western countries and cities have now.

Poland is still a very calm place. We don’t have the problems of the Western world. [Young Poles] are not aware of those problems. They are victims of manipulation, victims of propaganda. We know that there were many funds poured into propaganda, and as a result now we have this [pro-abortion] movement.

It’s hard to fight this when the United Nations, European Union and Council of Europe are openly promoting abortion, sexuality education, sexual health and rights, ideas like that.

LSN: What can the international pro-life movement do to help Poland?

I know there are many people [around the world] who think the way we think, who are dedicated to the protection of every human life at every stage. This is a moment when it is very important to show this support. It can be something very inspirational not only for Poland, but for the international community. I believe this ruling of the Constitutional Tribunal can be an inspiration for other countries to go down the same path.

Pawłowska: I think that we should be very loud now and very firm, and show that protecting the life of the unborn is not something weird.

LSN: Thank you very much!

Pawłowska: Thank you so much.

To congratulate the Polish government and ask that it respect the Tribunal’s decision for life, please contact: