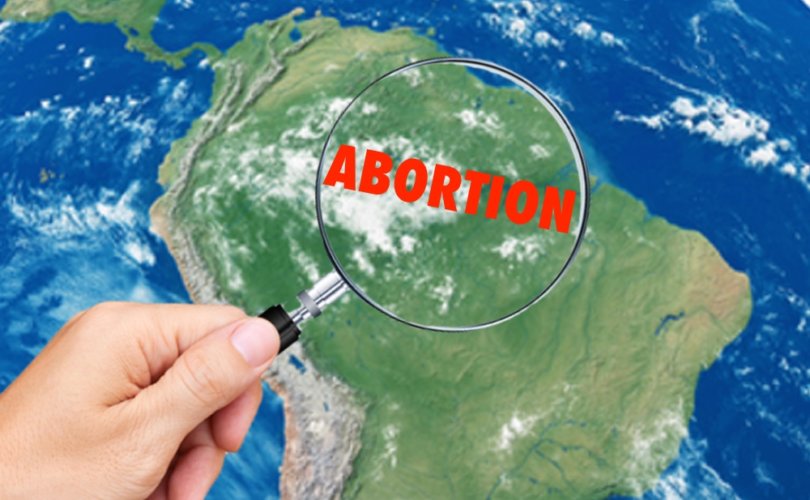 Editor's Note: This is the fourth and final article in a series on the Canadian Catholic Organization for Development and Peace, the Canadian bishops’ international aid organization.

May 2, 2017, (LifeSiteNews.com) – The Canadian bishops’ foreign aid agency, the Canadian Catholic Organization for Development and Peace (D&P), is funding two pro-abortion organizations in Colombia and Honduras, a LifeSiteNews investigation has uncovered. The two groups, in addition to the five groups previously covered in this series, make a total of seven anti-life and anti-family organizations that are being funded or have recently been funded by D&P.

Although D&P has refused to publish a complete list of groups it supports in developing countries since 2009 (when LifeSiteNews did its first exposé on D&P’s links to pro-abortion groups), LifeSiteNews found that D&P posted the names of ten of its Latin American aid beneficiaries in recent years.

Out of these ten known groups, seven of them (70 percent) are linked to pro-abortion activism, and most are also involved in anti-family LGBT activism as well.

Both groups sponsor activities promoting the elimination of criminal penalties for abortion in their respective countries, which currently protect the unborn, and also support special legal rights for homosexuals and transsexuals, including the right to “marry.” One of the CIJP’s main purposes is to support Marxist rebels in Colombia who are responsible for killing tens of thousands during their decades-long struggle to overthrow the country’s government and establish a communist state.

The Jesuit Reflection, Investigation, and Communication Team (ERIC-SJ) is a Honduran organization that seems to have merged recently with a Jesuit-run radio station in Honduras, “Radio Progreso.”

Development and Peace acknowledged its relationship with ERIC-SJ as a “partner” (recipient of grant money) as late as November of 2014. It boasted at that time of an award won by the organization for broadcasting.

“Fundación ERIC was given the award for its ‘grassroots radio programming; training on human rights, community organizing and empowerment; the formation of leadership committed to social change; and aiding migrant families,’” stated a D&P press release about the group dated Nov. 28, 2014.

One of the feminists associated with ERIC-SJ, Melissa Cardoza, has written multiple columns for the organization’s website that support abortion. In one, she describes her own abortion that she purposefully scheduled on the day commemorating the “International Day of Action for the Depenalization of Abortion” (Sept. 28).

In another column, Cardoza celebrates the life of a recently-deceased transgender “feminist,” the Argentinean “Lohana” Berkins, a communist who supported the killing of the unborn as well as the LGBT agenda.

“She was one of the historic strugglers for respect for the life and legislation of the transvestite, transsexual, lesbian, and homosexual community,” writes Cardoza, adding “she struggled for the right to free-abortion provided for all women, even though the issue had no relevance for her body.”

In another column written early this year for ERIC-SJ, Cardoza informs readers that feminists are those who “are making days that are more dignified for women with food, abortion, shelter, refuge.”

In addition to ERIC-SJ promoting abortion, justifying homosexual practices, and condoning promiscuous sexual behavior through its articles, the organization also gives classes in gender ideology. It teaches children that one’s gender identity may be distinct from one’s biological sex, and that traditional gender roles are merely constructs imposed by patriarchal capitalism.

“The capitalist system is based on the poor and the rich. The hegemonic model offers us a world of two, woman and man, rich and poor. This model also creates an unequal and asymmetric world, that is to say, one in which we don’t fit in. So the system, when one deviates from the norm, corrects us and the way of correcting is to exterminate,” the students are told, according to ERIC-SJ.

All of this material is published on the ERIC-SJ website.

The CIJP is an organization that purports to unite various religious groups in the struggle for “justice and peace” in Colombia.

D&P advertises its support for the CIJP, telling the public on its website that the group is an “umbrella organization” that “works at the national level defending the rights of the displaced and marginalized, including the afro-Colombian communities of the Chocó region. These communities are fighting for their right to live and work on their land.”

What D&P doesn’t mention is that the CIJP is an advocate of the Marxist insurgency groups that plague the rural areas of Colombia, principally the “Revolutionary Armed Forces of Colombia—People's Army (FARC). The People’s Army has waged a campaign of terrorism in Colombia for decades in its quest to impose communism on the country, a campaign that has resulted in the death and/or displacement of millions.

The FARC and other leftist insurgency groups in the region are infamous for kidnapping, extortion, and drug dealing. CIJP’s own website, however, portrays them as freedom fighters, while blaming all of the problems of the area on the counterinsurgency militia groups that the Colombian government helped to create in the 1980s to combat the revolutionaries.

The CIJP states openly on its website that the insurgency groups are exercising the “Right of War” because they’re fighting against an “unjust” society.

“The expressions of armed rebellion through the guerillas that exist in Colombia have arisen from ethical and political convictions regarding the transformation of a society that is structurally unjust, exclusionary, and anti-democratic,” the organization declares, adding, “The existence of various armed guerilla forces are the expression of the exercise of the Right of War, of Armed Rebellion recognized in International Human Rights Law, and in the Rights of Nations . . .”

As a pro-Marxist organization, the CIJP supports the pro-abortion agenda of leftist feminists, advocating the elimination of criminal penalties for abortion on its own website. It also champions the goals of homosexual activists.

In 2009 the organization republished an article defending the construction of an abortion clinic in the city of Medellín, which was being protested by Catholics.

The article lambasted twelve Catholic bishops for having launched what it called an “ocean of opprobrium” against the clinic. The article decried what it called the “moralizing dust cloud” raised by Catholic clergy regarding the clinic, saying that it is “asphyxiating and offensive” and “tramples on the rights . . . of Colombian women” and “degrades” them, denying them the “right to dispose of their bodies, of their lives, and of their liberty because of a metaphysical right to life of the fetus.”

The organization used its Twitter feed to promote the depenalization of abortion in 2011.

In 2016, CIJP republished an article called “Invisible black eyes,” which portrays women as being invisibly wounded by various forms of discrimination. The article gives as an example of wounded women those women who “back the status quo” and protest the legalization of abortion.

“Invisible black eyes often are given to you by another woman who backs the status quo,” the article stated. “Those women who march against abortion, for example, making religious arguments, without considering that this solution is not a response to an ethical quandary, but to a public health issue that regards caring for the life of the woman, that is, for a life of dignity, not of surviving, which we’re accustomed to in countries run by abusers like Colombia.”

In contrast, the site appears to contain no material whatsoever defending the rights of the unborn.

In the same year, the CIJP published a positive account of a feminist conference in Brazil that addressed how to advance “sexual and reproductive rights” in the midst of “religious fundamentalism.” The conference also argued for “sexual diversity” and the legalization of prostitution.

In 2013 the CIJP republished an article bashing the Vatican as “misogynist” for investigating nuns and female religious orders that oppose the values of life and family.

“The hierarchy of Rome insists in conspiring against the incorporated rights of the citizenry of our day: abortion, homosexual marriage, euthanasia, the marriage of priests,” the article stated.

The article criticized the Catholic Church for “closing the door” to homosexual “marriage,” and called it “absurd” for the Church to propose Catholic marriage as an “ideal” for young people.

The group’s website also promotes the gay agenda. In mid-2016, for example, CIJP published an essay bashing the Catholic Church for causing “homophobia” in Colombia, claiming that Jesus never taught that homosexual behavior is a sin. The article was titled, “Homophobic Jesus?”

“In contradiction to the spirit of Jesus of Nazareth, from whose doctrine they claim to derive their teachings, the universal Catholic Church and that of Colombia in particular, refusing to acknowledge advances in science and human rights, practices a homophobia that is wholly contrary to reason and human consideration: They consider the homosexual condition to be a ‘grave disorder,’ and homosexual acts as a grave sin and homosexual people to be outside of all communion with the Church,” writes the author, who is styled as a “pastor” and appears to be a member of the CIJP.

“If they want to enter into it and be redeemed from their sin they are only allowed a life in absolute chastity. Pope Ratzinger called homosexual behavior ‘intrinsically disordered.’ That is the source, the only one, that people consult when they legislate in Colombia,” the author stated.

The same author blamed “religious and confessional fanaticism,” which he said lacks “enlightenment and intelligence,”  for denying special rights to persons attracted to the same-sex.

Another article CIJP republished denounces as “Catholic fundamentalism” the notion that marriage is a union between a man and a woman.

The CIJP is also a member of the Colombian Platform for Human Rights, Democracy, and Development, which in 2016 issued a report advocating special rights for “LGBT” people, including homosexual “marriage,” and access to sex-change surgery, and claiming that it is “discrimination” to consider transgender people as mentally ill (see pp. 33-36).

The group also makes religious claims that do not comport well with Catholic doctrine. For instance, CIJP allowed a “bishop” of what is called the “Independent Catholic Church” to write an essay for one of its publications in which he claimed that God is not a “being” but rather a “force,” and referring to this force as the “goddess” (pp. 145-160).