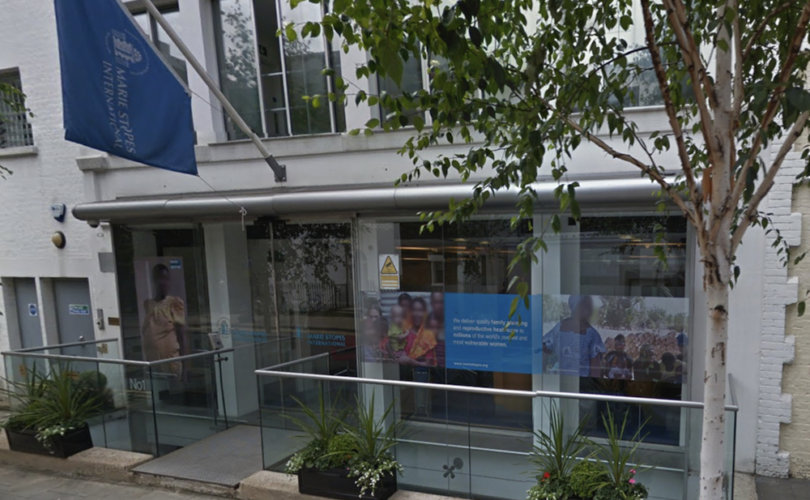 The paper sent a female undercover reporters into Marie Stopes clinics, where they found them using same procedural shortcuts that resulted in the suspension of many of its operations last year.

Marie Stopes does about 60,000 to 70,000 abortions a year. Under the Abortion Act of 1967, two doctors must agree the woman will face more health risks by having her baby than by having an abortion.

However, the Daily Mail reported, “Marie Stopes doctors approve thousands of abortions without meeting women … based on only a brief phone conversation with a call centre worker.” Several of these intake workers appeared to coach callers to give reasons that would fit the legislation.

The paper provided a transcript of one conversation in which the reporter repeatedly expressed concern about explaining to doctors her reason for the abortion. The care worker said their conversation was fulfilling that requirement.

“Right, so I won't have to talk. I don’t talk to him about my reason,” the reporter asked. “No, no, not at all. We’ve already documented your reason, OK?” responded the care worker.

The same transcript shows the woman giving as her reason, “I just don’t want to have my baby.” The worker replied, “Yeah? So it’s just not the right time for you at the moment, or … ”

The reporter then said, “Yeah, yeah. Exactly, yeah.” The worker replied, “Yeah? That’s fine. That will come under ‘emotional reasons.’” A second reporter gave the same reason and got virtually the same response: “That would fall down as an emotional reason.”

Last year, the Care Quality Commission suspended many MSI operations for a month and a half because of inadequate practices. The suspension included all abortions for women under age 18 and “vulnerable” women because the clinics were not taking enough care to secure informed consent. MSI also had to halt all abortions under general anaesthesia or conscious sedation because the clinics did not provide trained specialist assistants for the doctors. Finally, all abortions at MSI’s Norwich clinic were halted.

The Commission found doctors were signing permission forms in bulk. According to the Daily Mail, the commission reported “one doctor signing 26 consent forms in two minutes.”

In addition to its undercover reporter’s story, the Daily Mail’s expose included firsthand experiences with Marie Stopes from a doctor who worked there and a story about a woman who went seeking an abortion. Both used the expression “conveyor belt” to describe the urgency that MSI staff rushed patients through the approval process and the surgery or the dispensing of abortion pills.

“I went expecting sympathy, kindness and compassion and it was nothing like that. It was like a beauty parlor when you queue to have your waxing,” said Jade Stevens, who was 37 and a mother of three when she sought an abortion.

She told the Daily Mail she never saw a doctor and never got counseling.

“I saw several nurses and explained my situation. I felt like they wanted me to have an abortion,” Stevens said. “The place was chock-a-block with people. It is all about money.”

At the last moment, while lying on the operating table, she decided to have her baby.

Dr. John Parsons performed abortions at MSI in 2010. “The management took every opportunity to cut costs, cut corners and squeeze patients through as fast as possible with the least demanding protocol for treatment,” he said.

He said healthcare assistants “had just 20 minutes to explain the procedures to each patient, perform an ultrasound and take a medical history and a blood sample.” Medical staff operated “in a climate of fear” as administrators pushed them to process patients quickly.

The law does not require doctors to see patients face to face to approve their reasons for getting an abortion. But the consistent failure of MSI doctors to do just that was one of the concerns the Care Quality Commission raised a the time of the suspension.

Paul McPartlan, MSI’s managing director, told the Daily Mail that “our services comply fully with UK abortion law.” He said MSI had worked hard to bring its operation into compliance with the Commission's requirements. Another MSI employee said Parsons’ “views are not an accurate reflection of where the organization was at the time.” As well, they are seven years out of date and are unrelated to current conditions.

Nonetheless, two pro-life groups, Life and the Society for the Protection of Unborn Children, launched a joint petition for MSI’s permanent suspension.

SPUC chief executive John Smeaton said, “It is beyond comprehension that these state-sponsored death factories are allowed to remain open despite 2,600 failures being uncovered by inspectors — reportedly including doctors going home while women remained unsedated and foetuses thrown into bins instead of being cremated.”