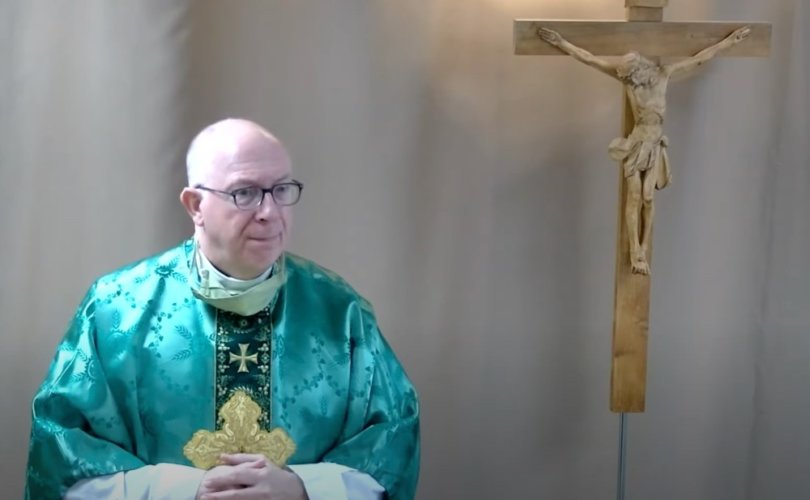 DUBUQUE, Iowa (LifeSiteNews) – The Catholic Archbishop of Dubuque, Iowa, has written to urge the faithful to reject “traditional burial methods” in favor of liquifying a corpse in order to be less “offensive” to the earth and environment.

Archbishop Michael Jackels made the argument in a letter dated October 20 entitled “Alternatives to traditional burial methods.” Making reference to the “two people” who die every second worldwide and the 2.5 million who die annually in the United States, Jackels declared that this “makes burial practices a significant environmental issue.”

‘Liquify’ bodies to save the planet

Estimates indicate that “more than 130 square miles of land” would be necessary for “in-ground burials” of those predicted to die in the next two decades, he wrote, lamenting how “natural resources” are used for the coffins and vaults, and that “ground water is polluted with embalming waste.”

Archbishop Jackels further critiqued the process of cremation, a practice forbidden for Catholics until recent decades, saying each cremation “uses about 30 gallons of fuel, and both the burning and the body itself release pollutants into the air.”

Praising the Catholic Church for being “a leader in the use of green burial,” Jackels proposed “alkaline hydrolysis” as the “green” alternative.

The process, according to the archbishop, involves combining “hot water, lye, air pressure and circulation” to “liquify a corpse in a matter of hours, which can then be safely poured in the ground.”

An alternative method proposed by the 67-year-old prelate was “recompositing,” or recomposing, a method whereby the body “is placed in a container, covered with wood chips, straw and alfalfa, using heat to kill contagions and air flow for decomposition. After a month, it results in soil.”

This process is used specifically with “environmental impact” in mind to aid “healing the climate.”

‘More offensive’ to the earth to not use green burial

Archbishop Jackels was not unaware of the unorthodoxy of his proposal, referencing the “challenge” of disposing of the “liquid or the soil in a reverential manner, same as the proper disposition of cremains.”

However, he defended his idea, saying “the Church only asks that the body be treated with respect, and be laid to rest in a place blessed by clergy, whether in the earth, water, fire, or air, cemetery or not.”

Noting that some Catholic bishops had already objected to recomposing in particular, given that it was “offensive, disrespectful, undignified,” Jackels suggested that not using such environmental methods was more “offensive.”

Appealing to more recent ecclesial pronouncements permitting cremation as an option for Catholics, Jackels argued that such logic would apply now to accepting “alkaline hydrolysis or recompositing.”

Archbishop Jackel’s push for “green” methods of burial, while rejecting even cremation – a revolutionary practice only recently adopted by the Catholic Church – would appear to be a radical departure from Church teaching.

Before the revolutionary changes made during and in light of the Second Vatican Council, cremation was forbidden for Catholics under Code 1203 of the Code of Canon Law 1917, in light of the Scriptural teachingthat the body is “the temple of the Holy Ghost.” Viewing cremation as a Masonic move, the Vatican excommunicated those who attempted cremation, with Pope Leo XIII prohibiting public, Catholic, funeral Masses from being offered for those who wished to be cremated.

The Vatican did, however, note that cremation was not against Divine Law.

But with the 1963 document Piam et constantem, the traditional teaching was undermined. While ordering that Catholics “refrain from cremation” except in cases of “necessity,” Paul VI opened the door to allowing cremations under certain circumstances while stating that the “ecclesiastical tradition must be kept from being harmed and the Church’s adverse attitude toward cremation must be clearly evident.”

Paul VI’s concessions soon led to a change in Canon Law, with Canon 1176 of the 1983 Code stating, “The Church earnestly recommends that the pious custom of burying the bodies of the deceased be observed; nevertheless, the Church does not prohibit cremation unless it was chosen for reasons contrary to Christian doctrine.”

However, in all these documents, the Church “insistently recommends that the bodies of the deceased be buried in cemeteries or other sacred places,” with in-ground burial being the “most fitting way to express faith and hope in the resurrection of the body.”

The Church “cannot, therefore, condone attitudes or permit rites that involve erroneous ideas about death, such as considering death as the definitive annihilation of the person, or the moment of fusion with Mother Nature or the universe, or as a stage in the cycle of regeneration, or as the definitive liberation from the ‘prison’ of the body,” the CDF declared.

Commenting on the Archbishop’s proposal, Brother Martin of the Oblates of St. Augustine called it “population control for the dead.”

“From his principle that Mother Earth is in danger of pollution, the Archbishop of Dubuque concludes that we can treat former temples of the Holy Ghost as mere human waste, complaining that they take up too much valuable space,” Brother Martin stated. “He also suggests a method by which the remains would turn back into soil. This is population control for the dead, and theosis in the religion of Mother Earth.”

Jackels was one of only five U.S. bishops who opposed an investigation into then-Cardinal Theodore McCarrick after the explosive testimonies by Archbishop Carlo Maria Viganò.

In June, Jackels opposed the formulation of a Eucharistic document by the U.S. Conference of Catholic Bishops that might have had wording against pro-abortion politicians being allowed to receive the Eucharist.