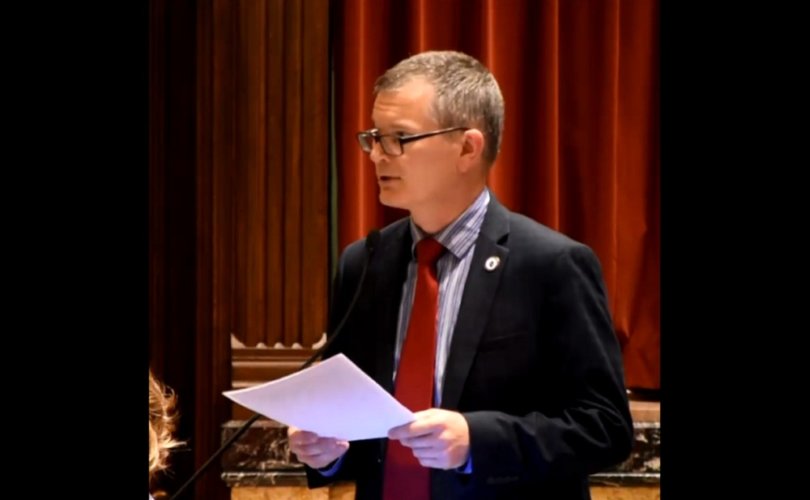 CEDAR FALLS, Iowa, October 4, 2019 (LifeSiteNews) — An Iowa boy and his parents are fearful of retaliation by teachers and school officials after the stepfather objected to seeing his stepson subjected to LGBT propaganda sponsored by a local junior high school.

Judd Saul, a local Christian activist and documentary film director, told LifeSiteNews that Robert Michael is worried about the repercussions of his encounter with a state senator, a former teacher, and a junior high school principal on September 23. That morning, Michael’s stepson sent a text to his mother asking to be taken home. It read: “Can I leave school today? Everyone is in gay flags and the gays are taking over.” It went on to say, “They are handing out gay stickers and donuts. You should let me leave.”

The text was accompanied by a photo that showed that rainbows and pro-LGBT messages and paraphernalia were being distributed to kids at the public Peet Junior High in Cedar Falls. When Michael arrived at the school with his wife, they found that the event had ended and that organizers were preparing to leave. According to Saul, members of the school’s gay/straight alliance slapped rainbow stickers on students as they arrived or handed rainbow flags. Colorful doughnuts were also made available.

Saul is a founding member of Cedar Valley Patriots for Christ.

Michael recorded a video of his encounter at the school with Sen. Eric Giddens (D) and wife Kendra Wohlert, who identified herself as a teacher. Giddens is a former member of the local school board. He and Wohlert claimed in the video that they were merely trying to welcome students to the school. As Giddens walked on the sidewalk leading to the school, Michael approached him and asked, “What’s going on?” Giddens was wearing a rainbow flag on his shirt. Michael asked, “What’s with the rainbow?” Giddens said, “It’s welcome to school.” However, when Michael asked Giddens’s name, Giddens turned his back and walked into the school. Wohlert had a rainbow sticker on her face.

According to Saul, parents were never informed by the school of the LGBT event or that adults would be handing out rainbow stickers and flags representing various sexual preferences to students.Saul said in the interview that he believes that the junior high school counselor had organized the event. In a report by the Iowa Standard (linked above), Principal Bill Boevers acknowledged that counselor Theresa Kenser had approached him earlier in the month about a welcome-to-school event. According to the report, Boevers told Michael that he was aware that it had a rainbow theme.

In the video, Wohlert then approached Michael and offered to answer questions. Michael continued toward the school, where Giddens finally identified himself and offered to go to the school office to explain the event. When Michael told Giddens that his stepson felt uncomfortable with the LGBT event, Wohlert interrupted, saying, “I’m sorry he feels uncomfortable. Can you imagine how it feels?” She then led the trio into the school, while confirming that the school approved the event. When they arrived in the school office, Wohlert asked to see the principal and announced an “emergency.” Appearing to taunt Michael, Wohlert said, “Imagine how it feels for kids who are not accepted for who they are.” Michael said he objected to the fact that he was not informed of the event.

When Principal Boevers appeared, he confirmed that he had approved the event. When he asked Michael to turn off his video recorder, Michael refused.

The video picks up later in an office with Michael’s wife present. There she explained that her son was not comfortable when people put rainbow stickers on him. “I have a son texting me that he’s not comfortable with what’s going on. It’s not what he believes. He has the right to believe that. Normally, he keeps his mouth shut, but when it came to a push like that, that’s not right in school.” She said, “Kids so different from him, if they want to wear t-shirts, whatever, that’s fine, there’s nothing we can say about it. But something like this, when you’re walking into it and running up to him and want to put stickers on him.” The mother theorized that the organizers of the LGBT event would probably refuse stickers advertising Donald Trump if they were offered.

Boevers claimed in the video that the event was intended to promote harmony at the school, to which Michael said the rainbow theme obviously shows support for the LGBT agenda.

Michael told Iowa Standard that there were adults at the tables lining the sidewalk leading to the school entrance that morning, as can be seen in a photo. According to Michael, Giddens loaded the tables into his truck at the end of the event. On Facebook, Wohlert was listed as “our fearless leader.”

Giddens, a Democrat, has represented Cedar Falls and Iowa’s District 30 Senate seat since March. At the swearing-in, according to The Courier, Giddens said he wore a purple necktie to symbolize his support of the University of Northern Iowa and the fact that he represents both Democrats and Republicans. The district is characterized by 32% active Democrat voters, as opposed to 30% Republican voters. Currently, there are 32 Republicans and 18 Democrats in the state Senate.

In the interview, Saul told LifeSiteNews that the Michael family is afraid of retaliation by teachers and students at Peet Junior High and are considering sending their son to a Christian school.

According to a Facebook post by LeAnn Saul, the Gay Straight Alliance is planning to “flood the school board meeting on Oct. 14 to defend their slapping your kids with pro gay stickers without your knowledge and without permission by your child.” The post called on parents to attend the board meeting to voice their objections.

The Iowa Standard reported on Thursday that school district spokesperson Janelle Darst confirmed that a group that calls itself “Difference” hosted the event last week. Darst commented that Boevers had indeed approved a “kindness” event and that the school district was aware of it. However, she added that the event, “as it took place,” was “not expected nor approved.” She added that the district will review how to handle events like this in the future so that “something like this, or similar, will not take place again.”

LifeSiteNews reached out to Giddens and Boevers via email but did not receive a response.