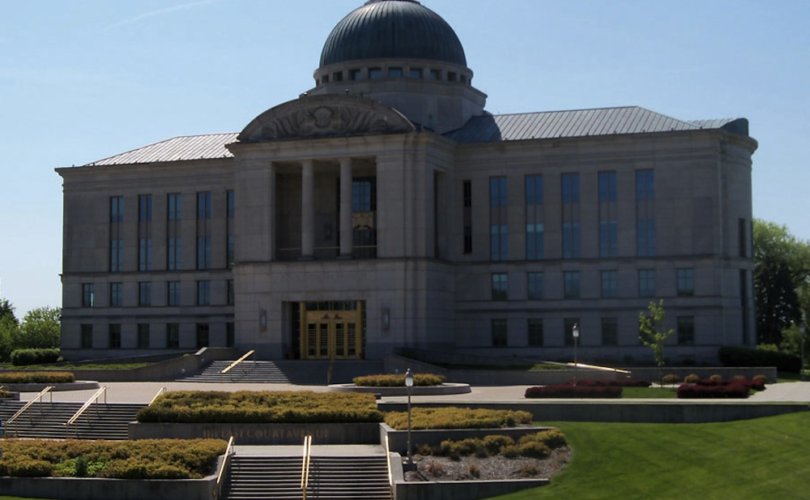 DES MOINES, Iowa, June 12, 2017 (LifeSiteNews) — Parents may sue their doctors for “wrongful birth” if their child has the possibility of a defect, according to the Iowa Supreme Court.

Divorced couple Jeremy and Pamela Plowman say they would have aborted their son in the womb had they known his 22-week ultrasound showed his head was slightly small — and therefore had a slim chance of having cerebral palsy.

Both parents are suing for “medical negligence” and seeking money for the costs of raising their son, mental anguish and loss of income. A lower court ruled against the Plowmans, but the state Supreme Court decided they could go ahead with their lawsuit.

Their baby’s ultrasound report noted that his head was “not well seen” and possibly small for his age — within the sixth percentile of average for the boy’s gestation. The report suggested “follow-up to document normal appearance.”

The doctor informed the parents that the boy’s head was “within two standard deviations of normal,” with the head circumference/abdominal circumference ratio being “slightly” below normal.”

No further testing was done. A month later, another doctor told the mother that everything seemed “fine” with her baby’s development.

It was only months after the baby was born that his mother noticed developmental retardation, and subsequent testing discovered “small corpus callosum.” The child is now five years old and has cerebral palsy, and so far cannot walk or speak.

The court based its decision, in part, on Roe v. Wade. Its ruling states that Roe “established as a matter of federal constitutional law that a woman has a right to choose whether to terminate her pregnancy free from state interference before the fetus is viable.”

The ruling quotes a New Jersey Supreme Court decision: “Informed consent and wrongful birth causes of action are similar in that both require the physician to disclose those medically accepted risks that a reasonably prudent patient in the plaintiff’s position would deem material to her decision” to abort.

The court admitted that some fear allowing wrongful-birth claims will stigmatize the disabled community. Nevertheless, “that concern does not warrant closing the courthouse door to these parents.”

The majority judges conceded the defendants’ concern that wrongful birth lawsuits “will increase the cost of prenatal care by encouraging physicians to practice ‘defensive medicine’ and that increased disclosure of risks will lead to more abortions.” Yet again they concluded, “We disagree that these concerns justify closing the courthouse door.”

Another concern is that wrongful birth suits will lead to fraudulent claims. The Missouri Supreme Court rejected wrongful birth lawsuits because “the right to recovery is based solely on the woman testifying, long after the fact and when it is in her financial interest to do so, that she would have chosen to abort if the physician had but told her” of the risk of genetic abnormality.

The court also mentioned the defendants’ concerns that wrongful birth lawsuits will “encourage abortions.” The judges did not say any more regarding that concern.

Judge Edward Mansfield was the lone dissenting voice. He noted that wrongful birth lawsuits are contrary to traditional common law, upon which the state’s laws are founded. He extensively noted that the ruling goes against long-standing Iowa statutes that  “discourage, not encourage, abortions.”

“There are good public policy reasons not to recognize the claim,” Mansfield wrote in his dissenting opinion. “In general, a medical malpractice claim cannot be pursued in the absence of physical harm.”

“I do not minimize the financial and personal burdens on the Plowmans of raising a severely disabled child,” the dissenter wrote. “But this is not a typical medical malpractice claim.”

Mansfield criticized the majority’s claim that wrongful birth is a failure-to-diagnose or a failure-to-inform action.

“Under a failure-to-diagnose claim, the physician can be sued because his or her negligence has resulted in physical harm. … Similarly, the informed-consent theory permits a physician to be sued only when inadequate disclosure of the risks of a ‘proposed medical procedure’ results in ‘injury.’“

He also noted that Pamela Plowman declined her doctor’s offer of amniocentesis during a subsequent pregnancy.

“In my view, the court’s ruling leads to a slippery slope,” Mansfield warned. “Today’s decision is limited to a ‘severely disabled child.’ But the court does not define the term. What if testing indicates the child will be born blind or without a hand? Is that enough? The court’s decision also opens up the possibility for other claims.” Mansfield gave examples where the logical extension of wrongful birth could also “open up the possibility that the children could sue for ‘wrongful prolonging of life.’“

In 2013, a Washington couple was awarded $50 million for wrongful birth, even though they knew they had a 50-50 chance of having children with “unbalanced chromosome translocation.” A genetic test failed to detect the disorder in the unborn baby.

In 2014, an Illinois woman won her wrongful birth lawsuit because her tubal ligation failed to prevent pregnancy, and she gave birth to a daughter with sickle cell disease.