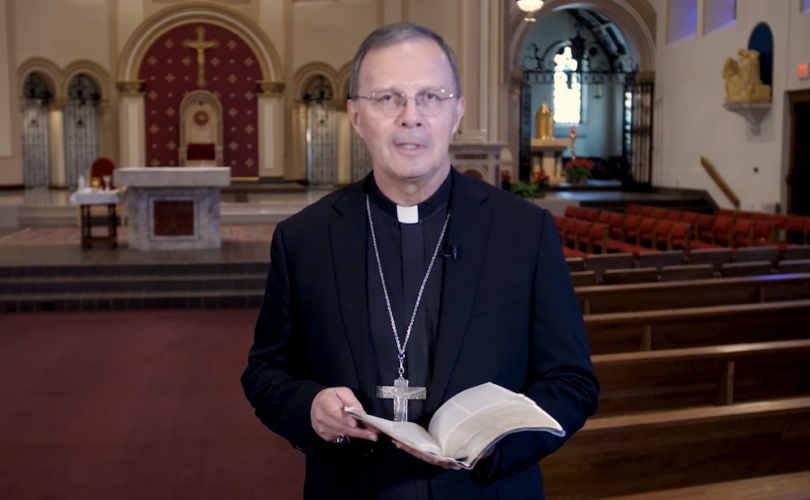 DES MOINES (LifeSiteNews) — On Monday, a Catholic diocese in Iowa enacted its “Gender Identity Guide and Policies,” prohibiting the use of “preferred pronouns” and cross-dressing on diocesan property while emphasizing the need to offer genuine assistance and compassion for those struggling with gender dysphoria.

The Diocese of Des Moines finalized seven policies on January 13 which promote a response to the ongoing “gender identity” crisis grounded in the teachings of the Catholic Church.

The guide emphasizes that those suffering from gender dysphoria “are unconditionally loved by Jesus Christ and the Church, and that they are vital members of the Body of Christ who have a home in the family of God.”

However, the diocese also maintains that “it must be understood that diocesan practices in our parishes and schools … will refer to all persons by employing gender pronouns that correlate with their biological sex.”

“The comprehensive Catholic Christian teaching about the human identity in accord with the mind and heart of Christ must be communicated and upheld with charity, practical wisdom and sensitivity,” the guide states. “Members of our schools, parishes and other communities are to accompany those families and individuals experiencing gender dysphoria with compassion and courage and patiently support them in their life journey … Concomitantly, they must likewise respect the Church’s mission to witness to truths accessible to reason and faith if they are to fully participate in our faith communities, including our Catholic schools.”

The new policies ban the use of “preferred pronouns” which do not correspond with one’s biological sex when participating in “ministry activities of any kind.”

“To permit the designation of a preferred pronoun, while intended as an act of charity, instead promotes the dissociation of biological sex and ‘gender’ and thereby confuses or denies personal integrity,” the guide states.

Bathrooms and locker rooms must be used in accordance with biological sex, and “diocesan parishes, organizations, and institutions are permitted to have individual-use bathrooms that are available for all members of the respective community.” Dress codes are also required to be followed in line with biological sex to ensure that “all persons are to ordinarily present themselves in a manner consistent with their God-given dignity.”

“Participation in parish, school, and co-curricular activities must be consistent with the biological sex of the participant,” the guide continues. “Some sports and activities may be open to participation by persons of both sexes.”

“Admission to single-sex programs, including but not limited to single-sex schools, camps, and retreats, is restricted to persons of the designated biological sex.”

The policies also prohibit anyone “to have on-site or to distribute any medications for the purpose of gender reassignment. Also, students and those entrusted to the care of the Church are not permitted to take ‘puberty blockers,’ even if self-administered, on parish or school property, with the purpose of a potential or actual ‘gender reassignment’.”

Additionally, the diocese condemned the practice of medical “transition” in light of Church teaching.

“The diagnosis of gender dysphoria does not merit the alteration of one’s body through drug-induced hormone therapies or surgery,” the guidance adds. “Rather, one is entitled to receive unconditional love and support, as well as psychological and pastoral care.”

“The Catholic Church teaches that the disruption of normal sexual development, or more dramatically, the removal or destruction of healthy sexual and reproductive organs, is a type of ‘mutilation’ that is medically and morally harmful. Procedures, surgeries, and therapies designed to assist a person in ‘transitioning’ his or her gender are morally prohibited,” the guidance continues.

With the increasingly popular trend to “transition,” dioceses across the country have begun implementing policies to respond to the issue charitably while upholding the teachings of the Catholic Church.

In July, the Diocese of Green Bay, Wisconsin, banned students and staff in diocesan schools from using pronouns, bathrooms, and uniforms which did not correlate to their biological sex. Similar guidance from the Archdiocese of Denver, Colorado, which made headlines in November, declared gender ideology to be contrary to the teachings of the Catholic Church.

Last month, Bishop Thomas Daly of Spokane, Washington, condemned the increased presence of LGBT ideology in Catholic schools as “tragic and sinful,” while also criticizing the lack of parental rights in public schools.