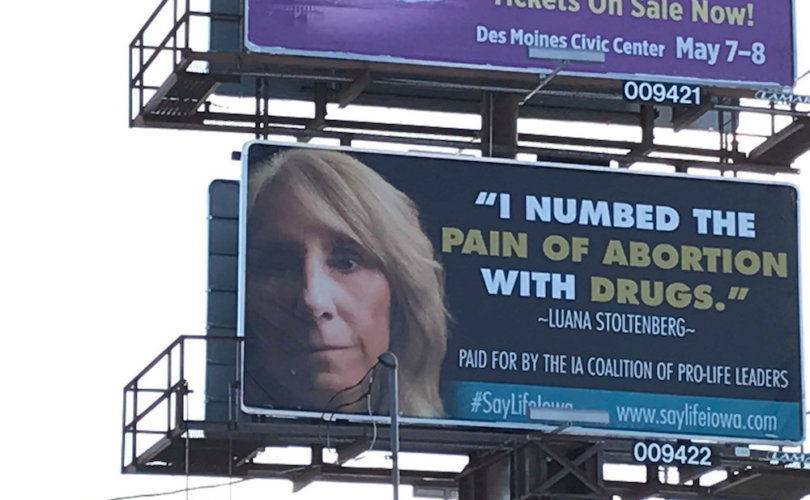 April 8, 2019 (LifeSiteNews) — An Iowa pro-life coalition’s response to a Planned Parenthood PR campaign to normalize abortion has resonated with people, its leaders say, by telling the truth about abortion through the stories of mothers who’ve survived it.

“My abortion caused physical and emotional trauma,” a mother named Tori from the Quad Cities says, alongside her picture on a billboard as part of the #SayLifeIowa initiative.

“No one should force you to abort,” says Serena in her testimony.

The billboards are a response to Planned Parenthood’s “Say Abortion” billboard campaign launched earlier this year with the goal of “breaking the cycle of silence and stigma” around abortion in the state.

The Planned Parenthood billboards contain photos of women saying, “I had an abortion,” the messages then ending with “and I am not ashamed,” “and it was just health care” or “and I am not apologizing.”

#SayLifeIowa has brought pro-life groups and individuals together to respond to Planned Parenthood with what has become a new statewide $50,000 billboard campaign.

The pro-life campaign features six actual women who were either killed or wounded by abortion, or who rejected abortion. Their stories are told in more detail at the Iowans for LIFE website.

In addition to its powerful and effective messaging, the #SayLifeIowa initiative is significant because it shows a way that pro-life organizations in other states can respond – because Planned Parenthood intends to place its pro-abortion billboards in other U.S. states.

The campaign also illustrates how successful the pro-life community can be when it collaborates – an important factor in responding to efforts by big abortion to push its product.

'We HAD to respond'

“We immediately raised funds to counter with our own billboard campaign which mimics Planned Parenthood's look,” Quiner said, “but with the other side of the abortion position displayed.”

“We HAD to respond to Planned Parenthood's outrageous billboard campaign,” DeWitte told LifeSitenews. “We have to show the true side of abortion; that it certainly is NOT healthcare, it hurts women, and destroys lives.”

After DeWitte spoke with Quiner, his company, Breakthrough Marketing, put together a test billboard using DeWitte’s photo and posted it to Facebook with the caption:

“Abortion can’t be healthcare, because someone dies.”

The caption, Quiner said, is a direct response to Planned Parenthood’s deceitful billboard stating, “I had an abortion, and it was just healthcare.”

“I would totally give towards this effort if it is to be a billboard campaign.”

“We had made no reference to billboards in our Facebook post,” Quiner told LifeSiteNews, “but our followers really wanted to see it happen, and so we sprung into action.”

Support for the pro-life message

“Our supporters responded immediately,” DeWitte told LifeSiteNews. “People were very upset at the Planned Parenthood messages and were so thankful that the pro-life movement was responding with the truth.”

“The response has been wonderful,” she said. “Not only are people willing to donate, they are very supportive of our messaging.”

“There are a lot of other wonderful pro-life billboards around town with positive messages like, “real men love babies,” said Quiner.

“We went a different direction,” he said. “Our billboards are a direct rebuttal to Planned Parenthood’s messaging by presenting the reality of the pain, violence, and degradation of human abortion.”

A pro-life coalition works together

Iowans for LIFE worked in union with the Iowa Coalition of Pro-Life Leaders to quickly develop the response with a special webpage and the hashtag #SayLifeIowa.

The Coalition formed two years ago among almost a dozen pro-life organizations to provide a more effective and unified message in educating on abortion and working to pass pro-life legislation.

Several groups in the Coalition of Pro-Life Leaders have committed funds to the project, with several more set to make financial contributions in the coming months.

The coalition is hopeful that its campaign will last as long as Planned Parenthood continues to have billboards in Iowa.

It was just over a month from the first call to the first four billboards going up.

Women voice the truth about abortion

The pro-life group enlisted help in the project from Luana Stoltenberg of Operation Outcry and Laura Limmex of Restored by Grace, both local post-abortive ministries, to find out whether any of the women they worked with would be interested in sharing their picture and message on Iowa billboards.

Both groups responded with a resounding yes, and began sending IFL pictures and stories of women harmed by their abortion.

“I was grieved after seeing these (Planned Parenthood) billboards,” Stoltenberg told LifeSiteNews, “being a woman who was so hurt and left infertile by abortion.”

Her billboard caption reads, “I numbed the pain of abortion with drugs.”

Stoltenberg contacted women involved with Operation Outcry, and she said there was some minor resistance because of the visibility and reach the billboards would have, but most were quick to say yes.

“They long to see others spared from the pain and that is what drives their passion,” said Stoltenberg.

She explained to each woman that there may be persecution and pushback because of their appearance on the billboards, and they also talked about making sure all of their family members are aware of their abortions, and that they would be on billboards as well.

They discussed what reactions they might get from family and how to respectfully work through it to make a decision they are comfortable with.

Each woman was asked to give a prayerful quote of how her abortion affected her.

Stoltenberg said it is very rare that we hear from men and women as to how they were affected by their abortion decision.

“Yes, it is raw,” she said, “but it is the truth of the pain and devastation they experienced from their abortion.”

Stoltenberg said that as the leader of her organization she was in complete agreement with the campaign’s approach to abortion.

“Abortion kills and wounds,” she said. “My prayer is that children’s lives are spared because of these true testimonies, and that women who have been hurt by abortion will seek forgiveness, help, and healing.”

“We have been lied to by the abortion industry and used to further their agenda of death and greed,” Stoltenberg added. “So it seems only right to speak out the truth in response to the lies.”

Limmex, director of Restored by Grace and a campaign participant, concurred.

“Their (Planned Parenthood’s) campaign is delivering a lie to our communities and we want the truth to be shared that abortion is not good healthcare and is harms a people deeply,” she said. “A child is lost and many are left to navigate a life following abortion which is filled with shame, guilt, anger and unforgiveness, unresolved grief. All of which we know there is help and healing for.”

As she approached women she worked with through Restored by Grace, Limmex said she asked them to take a couple of days to pray and consider the decision to have their picture and name on a billboard. She discussed with them the conversations that might arise with friends, family and co-workers. She also agreed with Stoltenberg in that it's necessary that they have shared with family and those closest to them.

“This is a delicate thing for these women,” Limmex told LifeSiteNews, “and I've enlisted intercessors to be praying for these ladies.”

DeWitte praised all of the mothers who courageously shared their abortion stories for the campaign.

“It is incredibly brave of these women in Iowa to share their story of hurt, shame, guilt, but ultimately of healing and forgiveness,” DeWitte told LifeSiteNews. “They want other women to see their message so they can avoid the hardship they endured.”

The #SayLifeIowa message reached Geraldine Jacobs in Ohio, a post-abortive mom who became pregnant and had an abortion shortly after Roe v. Wade became the law of the land in 1973. Jacobs performs outreach through A Voice for Victoria.

Jacobs shared one of the #SayLifeIowa Facebook posts regarding abortion, stating simply, “I wish I had rejected it.”

Keep telling the truth about abortion

The first four #SayLifeIowa billboards went up in the capital city of Des Moines, and then the group worked to get billboards in four other Iowa cities in subsequent weeks.

This is round one, said DeWitte, as the Coalition looks to launch more as Planned Parenthood billboards go up across the state.

“Our goal is to place billboards in every city in Iowa that Planned Parenthood launches their billboards,’ she said.

Drew Zahn, director of Communications for The Family Leader, expressed the importance of supporting the #SayLifeIowa project.

“Planned Parenthood has posted billboards to push the lie that abortion is health care,” Zahn told LifeSiteNews. “The Say Life Iowa billboards, on the other hand, give a voice to real women from Iowa who want to reveal the truth they all-too-painfully know: There isn't anything healthy or caring about abortion.”

“Furthermore,” he added, “the Say Life Iowa billboards connect women to both crisis pregnancy and post-abortive resources. The pro-life movement is pro-women, and we want to make sure women get both the truth about abortion and the help and healing they need.”

DeWitte noted that pro-life supporters used to hear repeatedly from the pro-choice contingent that they wanted abortion to be legal, safe and rare. Now the rare has long been eliminated and their new approach is to normalize abortion.

“But not even normalize it,” she said, “but shout it from the rooftops and be proud of their abortion. “

“Abortion is certainly not healthcare and it is certainly not normal,” she said. “The pro-life movement is a women's movement; we don't want women hurt and that is why this recent campaign is so vital.”

April 9, 2019 update: This report has been updated with additional quotes from organizers of the billboard campaign.