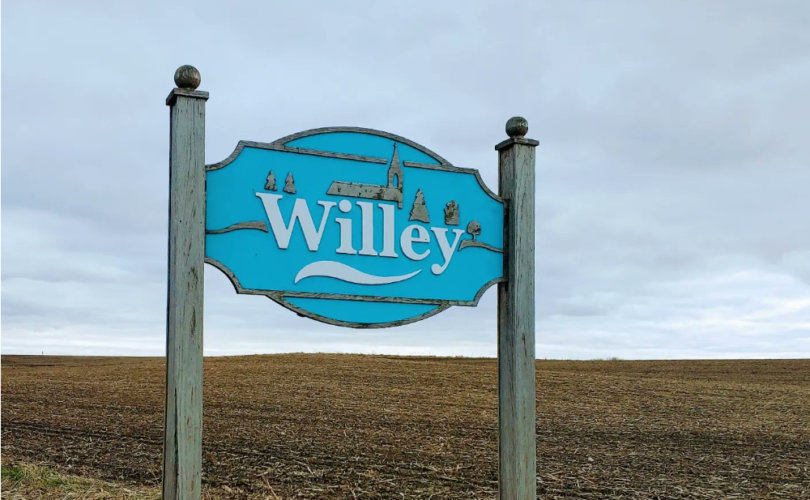 WILLEY, Iowa (LifeSiteNews) – On Monday, May 2, a small town in Iowa passed legislation banning all abortions and thereby making their city America’s 49th sanctuary city for the unborn.

On Monday, the Willey City Council unanimously voted for a bill outlawing all abortions within the city limits, local news outlet Carroll Times Herald reported. The law outlaws both surgical and chemical abortions.

Mark Lee Dickson, founder of the Sanctuary Cities for the Unborn initiative, announced on twitter: “Tonight the City of Willey, Iowa became the FORTY-NINTH CITY in the nation, and the FIRST CITY in Iowa, to pass an enforceable ordinance outlawing abortion within their city limits.”

Tonight the City of Willey, Iowa (pop. 101) became the FORTY-NINTH CITY in the nation, and the FIRST CITY in Iowa, to pass an enforceable ordinance outlawing abortion within their city limits. The vote by the City Council was unanimous, 4-0! Way to go Willey, Iowa! pic.twitter.com/GDbtUpT1RP

This decision was met with applause from the local townspeople who gathered outside to hear the news. Mayor Kristin Nehring supported this decision, saying, “I think that it is good for our community to speak out and do what they think is best and stand up for what is right, and I believe that is what the community did tonight.”

While there is no abortion facility in the town, the new law will restrict the building of one in the future. It also bans the distribution of mail-order abortion drugs which were sanctioned under the Biden administration.

“We’re not so much worried about brick-and-mortar abortion facilities as much as we are of abortion pill-by-mail and turning the mailbox into an abortion facility,” Dickson told local news.

The new law renders it “unlawful for any person to procure or perform an abortion of any type and at any stage of pregnancy.” It furthermore forbids “any person to knowingly aid or abet an abortion,” including “providing referrals to an abortion provider” or “arranging for the insurance coverage of an abortion.”

The law also fines all those who “aid and abet” others in murdering unborn babies. However, it specifically exempts pregnant women from prosecution.

According to Willey’s new law, abortion-inducing drugs will be considered “contraband.” However, the law does not prohibit “birth control devices or oral contraceptives” such as the so called “morning after pill.”

In response to the new law, the pro-abortion American Civil Liberties Union (ACLU) of Iowa harshly criticized the Willey City Council but failed to say if they plan to challenge the decision in court.

“Cities cannot punish women or doctors or other providers for providing or receiving medical services that are clearly legal,” ACLU of Iowa executive director Mark Stringer said. “Whether Iowans are able to access crucial medical services should not be dependent on their zip code.”

In response to this criticism, Dickson pointed out that, “Despite saying that cities cannot outlaw abortion, it is worth noting that the ACLU of Texas has lost every lawsuit they have filed against Sanctuary Cities for the Unborn as they have challenged the idea and ideas surrounding it.”

Resident of nearby town of Denison, Emily Thams, pointed out the significance of this new bill particularly in light of the recent leaking of the Supreme Court draft opinion which could overturn Roe v. Wade.

“I will never forget where I was when I heard of the Supreme Court leak that Roe v. Wade is set to be overturned. Where was I when I heard the news? I was at a council meeting where abortion was being outlawed in Willey, Iowa,” Thams said.

Following the Supreme Court leak new pro-life bills across America have emerged as legislators prepare for the potential overturning of the nearly 50-year-old abortion ruling.

Just this week Oklahoma Gov. Kevin Stitt signed a new heartbeat law banning all abortions after around six weeks of pregnancy in anticipation of the overturning of Roe v. Wade.

Similarly, Many Republican-led states, including Idaho and Florida, have enacted pro-life legislation in anticipation of the Court’s ruling.

Now the small town of Willey, Iowa has joined 48 cities across America which have pledged to preserve the dignity of life by becoming a refuge for the unborn.