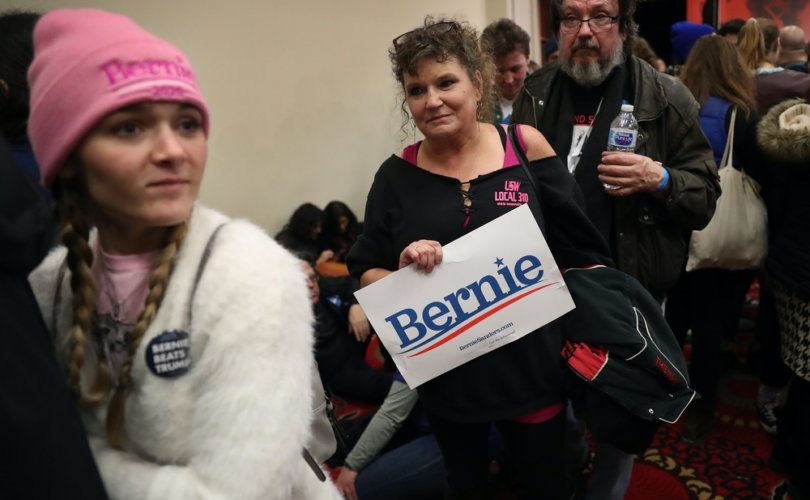 IOWA, February 4, 2020 (LifeSiteNews) – The nation went to bed Monday night not knowing who came out on top in Iowa’s Democratic caucuses, the all-important first presidential primary in the Democratic Party’s quest to find a viable candidate to face off against President Donald J. Trump in November.

After several hours on the air, beleaguered, bleary-eyed pundits on MSNBC and Fox News headed back to their Des Moines hotel rooms after treading water on national TV.

The news networks aired speeches by the frontrunners – former Vice President Joe Biden; South Bend, Indiana Mayor Buttigieg; Minnesota Senator Amy Klobuchar; Vermont Senator Bernie Sanders; and Massachusetts Senator Elizabeth Warren – broadcast from their Iowa campaign encampments, but none was a triumphant victory or tearful concession speech. All were simply rushed campaign speeches offered before dashing off to the airport to fly to New Hampshire, the next primary state.

Buttigieg then declared victory despite the lack of any official results.

“Tonight, an improbable hope became an undeniable reality,” he said. Buttigieg is openly homosexual and “married” to another man.

Donald Trump, Jr. posted a clip of liberal MSNBC commentator Chris Matthews expressing his disgust over the fiasco, counting it as a win not for any of the Democratic presidential contenders but for President Trump.

“The guy in the White House is chuckling all night,” said Matthews. “The Democrats can’t even get a three-car funeral organized.”

“I would say to the people of Iowa: Will the last person leaving Des Moines please turn out the lights,” continued the clearly unhappy Matthews.

“This has not been a success,” he added.

“When you’ve lost Chris Mathews… yikes,” tweeted the president’s son, who often serves as a surrogate for his father. “If the Democrats can’t run their own caucuses how can they run a country? They can’t and you know it.”

When you’ve lost Chris Mathews… yikes. If the Democrats can’t run their own caucuses how can they run a country? They can’t and you know it. pic.twitter.com/sl1CdCrRrA

“The Iowa caucus results appear to be indefinitely delayed, leaving the Democratic candidates in a lurch,” declared the subheading.

The Drudge Report, which in the last year has turned from its conservative, Republican roots and has taken an increasingly anti-Trump stance, likewise showed no mercy in its stack of headlines.

NBC said that the Iowa presidential caucuses “were thrown into chaos late Monday after the state Democratic Party said it found ‘inconsistencies,’ delaying results and causing widespread confusion across the state.”

A newly developed smartphone app created for caucus organizers to calculate and report results is being blamed for the Monday night train wreck.

“The app is the issue, and the hotline is smoked,” Joe Galasso, a caucus volunteer in Dallas County told NBC, and the backup phone line was “a disaster” according to another source.

“The app is f—–g up,” a senior aide to one of the campaigns told NBC. “Can't trust the numbers coming in.”

Amid the delayed reporting, some precincts were said to have broken ties with coin tosses, with at least one deciding a three-way tie by picking candidate names out of a hat.

In Des Moines Precinct 80, Sanders and Buttigieg ended up tied at four delegates each following a coin toss.

This is democracy??? ��#IACaucus pic.twitter.com/g9q1k67Vpn

As caucus room doors closed at 7:00 p.m., the results of the all-important Des Moines Register’s final poll – which had previously been suppressed for fear that the poll was tainted – were released, showing that Sanders in the lead at 22% going into Monday night, with Warren not far behind at 18%, Buttigieg at 16%, and Biden at 13%.

We can confirm the final results of the unreleased Iowa Poll:

Democrat-registered women showed up in droves according to preliminary entrance polls, vastly outnumbering men by more than 25%. Representation in Monday’s caucuses of young voters under age 30 surged 33% over 2016 levels, while many Democrats ages 45-64 stayed home, simultaneously dropping from 36% in caucus goers in 2016 to just 28%.

Despite the increased presence of young people, overall participation was ostensibly the same as 2016.