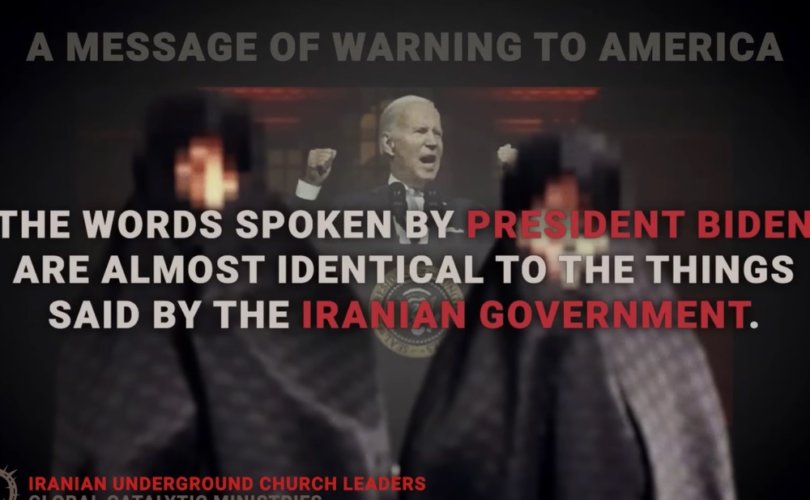 (LifeSiteNews) – Two Iranian underground church leaders have warned the West that the rhetoric in President Joe Biden’s September 1 speech is “almost identical to the things said by the Iranian government.”

The two anonymous women said in their video, “A Message of Warning to America, From the Underground Church in Iran,” that the persecution they endure in Iran “is quickly coming to the United States and to the West.”

In his speech, he [Biden] banged his fists and angrily declared that his political opponents are a threat to democracy, to the rule of law, and to freedom. […] The words spoken by President Biden are almost identical to the things said by the Iranian government. They warn that we underground Christians are a great threat to Iran. They say we are a threat to the rule of law, even though we are ordinary people and families and law-abiding citizens.

Furthermore, they warned the West that “the day when your own government treats ordinary citizens like a threat has arrived.”

The video was originally posted online by the organization Global Catalytic Ministries (GCM), a “nondenominational 501(c)(3) nonprofit organization” that aims to “transform Muslims in the Middle East and around the world through leadership development, church planting, and compassion ministries.”

Likely due to fears of repercussion by government authorities, the faces of the women in the video are pixelated. They speak in Persian with added English subtitles.

To confirm the authenticity of the video LifeSiteNews contacted Joel Richardson, who used to serve as the chairman of the board for GCM and is currently still working closely with the organization. Richardson told LifeSiteNews that the two women in the video are members of GCM in Tehran, and that he knows them personally. They sent the video to GCM to edit and post it publicly, according to Richardson.

Richardson, in addition to his work with GCM, is a New York Times-bestselling author, and a filmmaker.

Even though the Catholic Church is a recognized religious minority and therefore not officially forbidden in the Islamic Republic of Iran, Catholic churches are closely monitored by the government, and religious schools are limited in what they can teach. Conversion from Islam to any form of Christianity is a crime that can lead to a sentence of more than 10 years in prison or even capital punishment since apostasy merits the death penalty according to sharia law.

Iran has recently experienced large demonstrations against the ruling regime.

Videos on social media show women publicly burning their hijab (head scarf) and dancing as a sign of protest against the Islamic regime.

The scenes in Iran are astonishing. How far will these protests go?
pic.twitter.com/AJeHB0yyYB

Some of the protests also became very violent. Following the death of a woman, who was reportedly beaten to death by Iranian authorities for not wearing her hijab correctly, nine people were killed in a protest that escalated, with demonstrators setting fire to police stations.