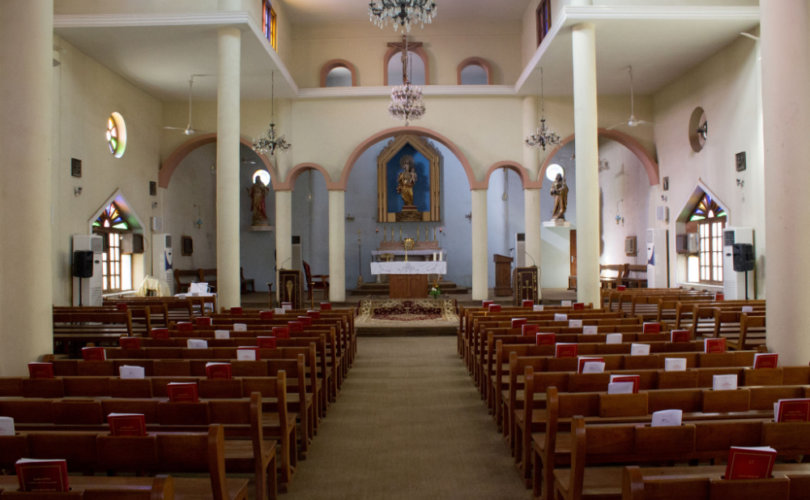 BAGHDAD (LifeSiteNews) — The plight of Christians in Iraq has long been known to be precarious, but they are now in danger of wholly disappearing, and those currently living there stand in great need of catechesis.

Because of Islamic oppression, “Iraqi Christians, and perhaps also Christians of other nations, will soon disappear if there is no change in thinking and of the state system,” a political system in which the “Islamic heritage makes Christians second-class citizens and allows usurpation of their property,” said Cardinal Raphael Louis Sako, the Chaldean Catholic Patriarch of Baghdad.

The Patriarch made those remarks at the opening of the Synod of the Chaldean Church, which took place in Baghdad in August. In light of the cardinal’s words, LifeSiteNews reached out to an Iraqi refugee, who must remain anonymous for reasons of safety, for details on the Church in Iraq, which claimed some of the oldest churches in the world, including the tomb of the Old Testament Prophet Jonah in Mosul that was destroyed by ISIS in 2014.

The refugee’s village was the largest community of Christians overrun by ISIS. The university at which the young man was studying at the time for a degree in engineering was wholly destroyed, and he was displaced for several years.

Asked about the current situation in Iraq concerning Christians, the young man wrote the following to LifeSiteNews:

“The world’s attention was drawn toward Iraqi Christians in an intense way after the events of 2014 and the occupation of large parts of Iraq by ISIS, in which a great number of Christians lived. Many of them started going abroad, seeking asylum in Europe, the U.S., and Australia, while many remain trapped in the limbo of Lebanon and Jordan, waiting for an answer or a country to welcome them so they could start a new life away from the ‘hell’ that was once home.”

“But is it truly a hell now? Since the liberation of the occupied cities took place in 2017, Christians have started returning to their homes, rebuilding them, and reinstituting their businesses with the help of many international organizations. Currently everything is stable economically and socially (except in some small towns that are either taken over by Muslims like Talkef, or because of the refusal of the people of these towns to return to them). But is that all that matters? What do Christians in Iraq need today? And what is the Catholic Church offering?”

“In such Christian towns, you would see the churches full on Sundays and feast days, and you would get the idea that the people are very devout and practicing. But not all of them are like that. To many people, Christianity has become merely a part of their heritage and tradition, or a way to identify themselves and to feel that they belong to a group, but not really a faith or a path to follow.”

“There are many reasons that this has happened: materialism, poor catechism, and corrupt clergy, which ultimately leads people to abandon the Church. Another danger is the lack of vocations and atheism. Young people do not want that [a vocation] anymore, and religion gives them no interest. These problems might be everywhere in the Church throughout the world, but it is more problematic when it is happening to people whom the rest of the Catholic world sees as ‘heroes’ or ‘models’ for Christians, who kept their faith during times of war and persecution.”

“From my personal perspective, I see that the Church is focusing on matters that are not important and is swaying away from its purpose, which is the salvation of souls. There are some attempts, though, from some good priests to teach people the basics of their faith, the dogmas, and the catechism in general, through meetings, lectures, and sermons, but attendance is not high. Many times, when I have asked people basic questions about the faith, they cannot answer. And when I tell them what the church teaches about certain things, such as sin, sexuality, and morals, I either get looks of disgust or comments of disapproval.”

“Young Christian generations from the ‘conservative’ Middle East are starting to have their mentality replaced slowly with liberal values that have nothing to do with Christianity. And when such ideas or problems are addressed by the Church or the clergy, people simply get upset and refuse to listen, saying that the clergy are so corrupt that they have no right to judge or tell them what to do.”

“Very few people go to confession (before Christmas and Easter) and those who do not think it is unnecessary since they can confess to God directly, and that the priest sins in a worse way than they do — so why confess to a sinner? People do not trust the Church anymore, and they do not know their faith anymore.”

“The Catholic Church has been helping Christians in Iraq for a long time, mainly through financial or humanitarian aid, and this is absolutely appreciated, since it is necessary for those in need. But the Church should react to this lukewarmness, and take care of the spiritual life of souls, and educate them well in the faith. This should start from the clergy, who are not well initiated, and are lacking in zeal, as I observe often. The Church must work on gaining people’s trust again in any way possible, and teach them the basics of the Catholic faith, even if it requires sending in missionaries, because this is what Iraqi Catholics really need: going back to basics.”

“This of course should not give the impression that all Iraqi Christians are like this, or that there is no faith at all, or that all clergy are corrupt. But it is a serious issue that should be addressed and dealt with, as it should elsewhere in the world. The best way for the Catholic Church to help Iraqi Christians is by finding a solution to these issues, so that such Iraqi’s can truly be Christians in faith and belief, and not only in name.”