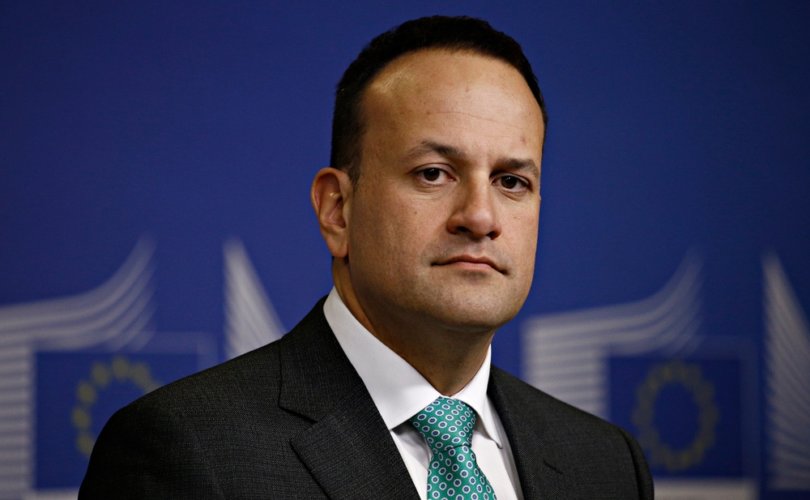 DUBLIN, Ireland, December 23, 2020 (LifeSiteNews) – Politicians in Ireland have announced a third national lockdown, banning public worship once more and saying that the restrictions will likely continue until there have been mass vaccinations.

Taoiseach Micheál Martin announced the grim news in a press conference Tuesday afternoon, justifying the move by referencing an uptake in COVID-19 ‘positive’ cases. The restrictions take effect at midnight on December 24 and are officially set to last until January 12, when a review is to take place. The Dáil Éireann, Irish parliament, is due to return on January 13, after the Christmas break.

Despite setting a date, Martin admitted to the press that the government did not actually have any targets it wished to have met by January 12.

However, that date seems to have already been altered, as the deputy prime minister Tánaiste Leo Varadkar, intimated that the lockdown would last until March, and would be linked to vaccination roll-outs. “It will probably be towards the end of February or early March before a critical mass of the population is vaccinated and I think we need to operate on the basis that these restrictions will be in place until then,” Varadkar declared.

The Tánaiste’s words are similar to those of U.K. Health Secretary Matt Hancock, who on Sunday suggested that newly announced lockdowns in the U.K. could last until a vaccine was widely distributed. “We don’t know how long these measures are going to be in place. It may be for some time until we can get the vaccine going…It is going to be very difficult to keep it [the virus] under control until we have the vaccine rolled out.”

Martin went further in an interviewthe day before, saying that restrictions could last up to six months: “We’ll be looking at restrictions for the next six months. It’s going to be a parallel process of vaccinating the public while at the same time keeping the pressure on the virus.”

Both politicians have also stated that they are operating on the assumption that the newly identified strain of COVID-19 is in the country, although gave no evidence at all to support this. “We do not yet have firm evidence that the new, more virulent, strain of the Covid virus is in our country,” Martin revealed, yet added the government would work “on the assumption that it is already here.”

“We don’t know if the new variant is circulating in Ireland but we’re operating on the basis that it is,” Varadkar echoed.

The latest restrictions are somewhat staggered, with some measures starting on Christmas Eve, others on December 27, and still more coming into effect on New Year's Day. Gyms, leisure centers and swimming pools have been permitted to remain open, along with non-essential retail, although stores have been asked to avoid holding January sales.

From New Year's Day, “no visitors are permitted to your home except for essential family reasons, such as providing care to children, elderly or vulnerable people, or as part of a support bubble.”

Martin made reference to an “alarming scale of the growth” of the virus, saying that this was “of grave concern and couldn’t be ignored.” He made the alarmist claim that Ireland was experiencing a “third wave” of the virus, which could see higher hospital admissions and deaths compared to the ‘second wave’, which saw only “limited” admissions and “low mortality.”

Yet, figures as recently as December 20 show just 1,911 deaths have been attributed to the virus in Ireland, with 238 infected patients currently in hospital, and 28 in intensive care. Including patients termed as probably or possibly infected, 2,171 deaths in total have been linked to the virus, but 2,018 people who died already had underlying health conditions. The average age of those who have died is 81 years.

Speaking on TV last Friday, Varadkar even mentioned how “this winter in Ireland has seen no excess deaths”.

Whilst retail is permitted to continue, the government has once again moved to force churches and places of worship to close, with effect from December 26. Christmas Day Masses will be the last ones permitted.

All ceremonies are to “move online” and churches will be open only for private prayer. Weddings can occur and have 25 guests present until January 3, from which point only 6 guests are allowed.

It marks the third time this year that the Irish people will be barred from attending Mass and the sacraments. Mass was only re-permitted a few weeks ago after two months without public worship, with lockdown regulations threatening jail to priests who said Mass.

Catholics previously petitioned for a return to Mass and the sacraments, noting that it is actually unconstitutional in Ireland to ban worship.

In a statement to LifeSiteNews, Anthony Murphy, Director of Lumen Fidei Institute and editor of Catholic Voice magazine, described the law as “an unjust and discriminatory attack on our faith fuelled by the anti-Catholicism of our political leaders” adding that “we have a duty to resist this law which takes Ireland back to the penal times.”

Murphy noted the discrepancy between Ireland and England and France, saying that “our bishops chose to abandon the faithful and collaborate with the pagan state – it is particularly shameful that at this time of year our bishops remain silent.”

“How can it be that gyms and shops can remain open, but churches must close even though all churches in Ireland implemented procedures to make public worship safe? The government cannot provide any evidence that public worship is not safe and so this ban must be rescinded immediately and if not then faithful Catholics and priests must be ready to stand up to this new wave of persecution. I encourage Catholics to seek out good priests and with them organise the public celebration of Mass.”

Murphy continued: “While the state has a duty to care for the health of its people the ultimate provider of health is God and at this time of year we must be allowed to celebrate the birth of his Son, the Saviour of mankind not just on Christmas Day but throughout the year.”

“We cannot allow the state to reduce the worship of God to a ‘non-essential’ service while at the same time encouraging people to go to gyms or the hairdresser – we must prioritise the spiritual health of the nation because only God can lead us out of the darkness of this crisis. I pray that one of our bishops finds the courage to speak out against these harmful and unnecessary restrictions. All we need is one good bishop to lead the fight back against the state-sponsored censorship of Christ.”

Newly formed conservative political part Aontú, has called the church closures “incredibly illogical” adding that “The democratic process is another casualty in a long list of Covid.”

Dr. Roger Hodkinson, CEO and Medical Director of Western Medical Assessments, has blasted lockdown measures, saying that “[a]ll of this is draconian … first of all because they have no basis in evidence-based medicine, and secondly because of horrendous consequences of that action.”

“The bottom line is simply this: There is utterly unfounded public hysteria driven by the media and politicians. It’s outrageous. This is the greatest hoax ever perpetrated on an unsuspecting public.”