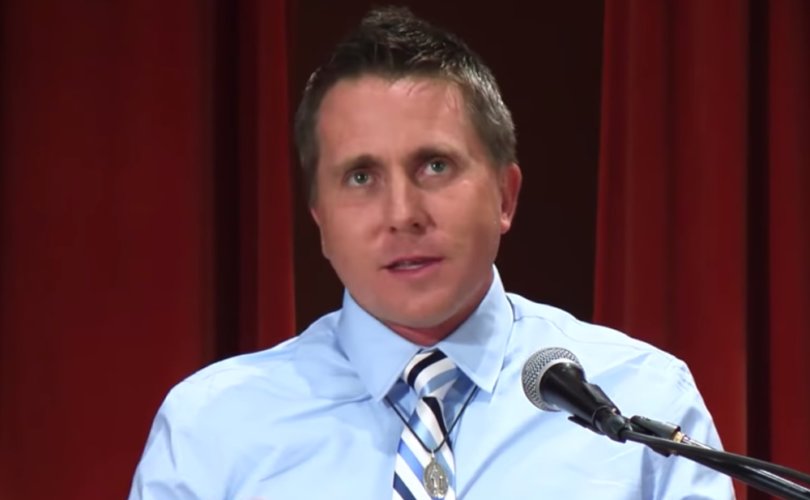 January 14, 2020 (LifeSiteNews) – A number of upcoming talks in Ireland by well-known Catholic chastity speaker Jason Evert — two of them at Catholic schools — have been abruptly canceled, allegedly because the speaker upholds Catholic teaching on homosexuality and contraception.

Evert is a founder of The Chastity Project and gives talks around the world on sexual ethics – discussing issues such as marriage, dating, pornography, homosexuality and contraception. He and his wife Crystalina claim to have spoken to “more than one million people on six continents about the virtue of chastity”.

The Irish Times has reported Jan. 12 that several of Evert’s talks due to be given in Ireland have canceled “after concerns were raised about his views on homosexuality and contraception”.

The Irish Times cites Evert’s book Pure Manhood and a section of it which says: “the homosexual act is disordered, much like contraceptive sex between heterosexuals. Both acts are directed against God’s natural purpose for sex – babies and bonding.”

The Catholic Church teaches that homosexual acts “intrinsically disordered” since they are “contrary to the natural law.”

“They close the sexual act to the gift of life. They do not proceed from a genuine affective and sexual complementarity. Under no circumstances can they be approved,” states the Catechism of the Catholic Church.

In May 2015, Ireland held a referendum in which the people voted to legalize same-sex “marriage.”

According to the Times’ report, talks at two Dublin Catholic schools, a Catholic conference called ‘Ignite 2020’ and a talk at hotel have all been canceled. Events scheduled at a residential Catholic community for young people in County Waterford and at a Catholic parish in Dublin are still due to go ahead.

No information was given in the report as to why the events at the Catholic schools, or the hotel were canceled.

But the LGBT Society at University College Dublin (UCD) where the the ‘Ignite 2020’ conference is taking place issued a statement on Twitter that said that Evert’s talk was “putting the safety of UCD’s LGBTQ+ community at risk” and that his speaking at the event could cause “lasting and damaging effects on the mental wellbeing of LGBTQ+ students.”

We are saddened and disheartened to hear that Jason Evert has been invited to speak in UCD this coming Thursday. Full statement below @LgbtUCDSU @UCDSU @UCD_EDI @ucddublin pic.twitter.com/XkiVHwS6Xl

Following the cancellation of the event, the LGBT group issued another statement to Twitter thanking “everyone for their support and solidarity in this matter”.

Thank you to everyone in UCD who spread awareness and help make this happen Hate is not welcome on our campus https://t.co/Lz54InALfd