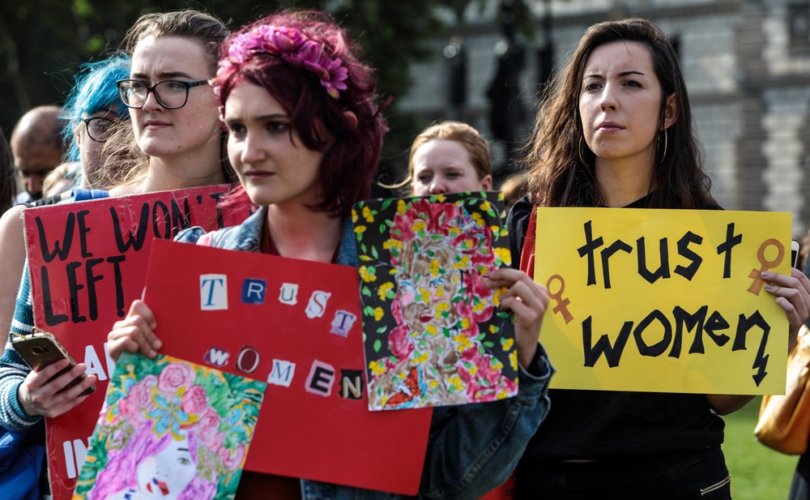 Pro-abortion activists outside the Houses of Parliament in 2018, when the British Government was under pressure to liberalize abortion laws in Northern Ireland after the Republic of Ireland voted to repeal its pro-life law in a referendum on May 25, 2018. Photo by Jack Taylor / Getty Images

DUBLIN, Ireland, July 1, 2020 (LifeSiteNews) – 6,666 unborn babies were killed last year in Ireland, following the legalization of abortion in the formerly Catholic country. The number of abortions is oddly reminiscent of the biblical “number of the beast” of the book of Revelation: “This calls for wisdom: let him who has understanding reckon the number of the beast, for it is a human number, its number is six hundred and sixty-six.”

According to the Irish government’s data, 6,542 abortions were carried out early in the pregnancy. The Health (Regulation of Termination of Pregnancy) Act 2018 defines that “early” means “the pregnancy concerned has not exceeded 12 weeks of pregnancy.”

Only 24 abortions were performed due to a proper risk to life or health of the mother. An additional 100 babies were killed because abortion providers determined “a condition affecting the foetus that is likely to lead to the death of the foetus either before, or within 28 days of, birth.”

Liam Gibson, Political Officer of the Society for the Protection of Unborn Children (SPUC), characterized the numbers as “truly shocking.”

“It would be easy to be overwhelmed by the sheer numbers of abortions or to be horrified by what the killing of children on this scale tells us about Irish society,” he said. “However, we must never lose sight of the fact that each one of these 6,666 abortions was a deliberate act of lethal violence directed at an entirely innocent and unique human being.”

Referring to the fact that abortion had been legalized in Ireland following a referendum in May 2018, with only one third of the population voting against abortion, Gibson said, “No government, no state, regardless of a referendum can abrogate the God-given right to life of even one member of the human family.”

According to the SPUC representative, “Abortion is never justified, [and] every child has the right to be born regardless of their stage of development, their disabilities or the circumstances of their conception.”

Now, however, the law simply states, “Provision may be made by law for the regulation of termination of pregnancy.” This was done with the Health (Regulation of Termination of Pregnancy) Act 2018.

“The pro-life people of Ireland have fought a long, hard battle to protect women and children from abortion,” recounted Liam Gibson. “It is very important that they do not [remain] silent in the face of this terrible injustice. Their commitment to defend every individual unborn child by speaking out against abortion at every opportunity will, in the end, prove to be decisive.”

In February 2019, shortly after abortions started to take place on January 1, abortion activists began to make legal moves on the Emerald Isle to prevent vigils in front of abortion centers, restricting freedom of expression and speech.

The Drogheda Life news website reported that Louth County Councillor Emma Coffey proposed “an exclusion zone around the Lourdes hospital and other health facilities in the county that provide abortion services.” Her aim was to make it illegal to protest at abortion facilities in Louth county.

At a meeting of Louth County Council held in Dundalk, on February 18, 2019, Councillor Coffey’s motion was passed by a majority vote. The motion introduced, via existing council bylaws, a prohibition on any pro-life vigils held within 500 meters of a hospital or clinic.

However, in the summer of 2019, thousands of pro-lifers marched through the streets of Dublin to affirm the sanctity of life.

Organized on July 6 by the pro-life groups Life Institute, Precious Life, and Youth Defence, the annual Rally for Life was meant to emphasize that “no vote, no act of parliament can ever make it right to kill a child” and to raise the “next generation to stand for life and to change the culture.”