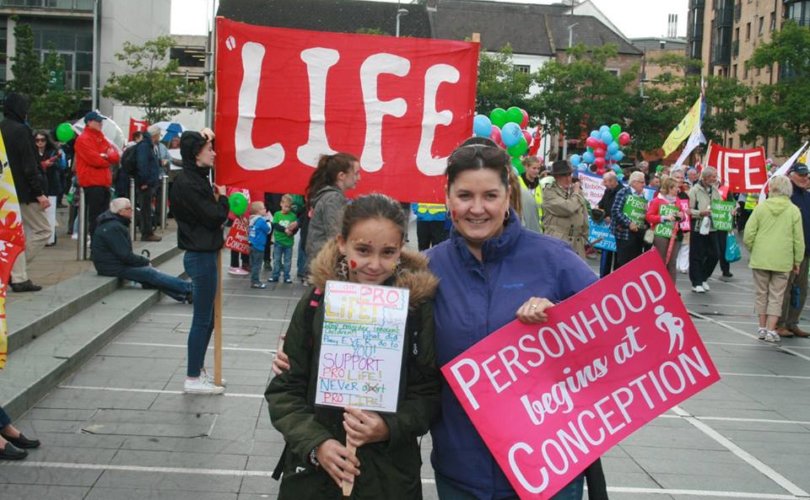 February 25, 2019 (LifeSiteNews) – In the wake of changes to Ireland’s abortion laws, which came into force at the beginning of this year, small groups of pro-lifers have been seen gathering outside various medical facilities that offer abortion or referral to abortion. One of the places these peaceful vigils have taken place is at Our Lady of Lourdes hospital in Drogheda.

As with the vast majority of pro-life vigils across the world, the men and women who took part did so peacefully and without interfering with anyone accessing the medical facilities. Now, however, as has happened across the Irish Sea in London, legal moves are being made to prevent such vigils and, thereby, to restrict the freedom of expression and speech that they represent on the subject of abortion.

The Drogheda Life news website reports that Louth County Councillor Emma Coffey proposed “an exclusion zone around the Lourdes hospital and other health facilities in the county that provide abortion services”. Her aim was a simple one, namely, to make it illegal to protest at abortion facilities in Louth county.

At a meeting of Louth County Council held in Dundalk, on 18 February 2019, Councillor Coffey’s motion was passed by a majority vote. The motion introduces, via existing council bylaws, a prohibition on any pro-life vigils held within 500 meters of a hospital or clinic.

After the motion was passed, Coffey, a local solicitor, was quoted as saying: “I am pleased to say my motion went down well with the main parties, I got cross party support from my own party Fianna Fáil, from Fine Gael, Labour, and also Sinn Féin”.

Coffey is a member of Fianna Fáil, a political party once synonymous with the traditional views of Catholic Ireland. The party was founded in 1926 by Éamon de Valera. De Valera would frame the 1937 Irish Constitution in terms of a Catholic vision for the nation. For many decades thereafter Fianna Fáil was a conservative force in Irish politics. However, its current leader, Michael Martin, stunned many in the party when he gave his full backing to the pro-abortion ‘Yes’ campaign in last year’s referendum.

Most of the main Irish political parties are now pro-abortion in their policies. Unexpectedly, therefore, in this week’s debate on Louth’s proposed censorship zone, there was one lone voice of opposition to it. That came, surprisingly, from the Green Party, a political party not noted for pro-life views.  Green Party councilor Marianne Butler was, however, not so much concerned about the rights of unborn children as “the possible constitutional issues” generated by the motion. As reported by Drogheda Life, Coffey dismissed scruples around her motion. “I am a solicitor and I wouldn’t have brought this motion forward unless I thought it was legally sound and I also sought advice from colleagues and they all agreed” Coffey said.

Furthermore, Coffey lamented the fact that the Irish government has not already instituted such “exclusion zones” nationally. She told Drogheda Life: “I believe the government should have brought in this type of policy at the same time as the abortion legislation [in January] to protect medical professionals and to prevent people availing of their services from being harassed or intimidated”.

In attempts to silence pro-life witness, the words “harass” and “intimidate” are all too familiar. Perhaps, then, it comes as no surprise to learn that Coffey cited England’s first censorship zone introduced in 2018 by Ealing Council in London as an example of how to counter pro-life witness.

Drogheda Life went on to report that Coffey wants – “as quickly as possible” -censorship zones legislated for throughout Ireland by central government. Coffey sees her actions merely as a local initiative to effectively blunt pro-life witness outside those places currently carrying out abortions. Coffey said: “Hopefully we can set the ball rolling for other counties who might take matters into their own hands and call for the legislation to be implemented in their county”.

Reacting to the motion’s passing by Louth County Council, Charles Byrne, a local pro-life activist, told Drogheda Life:  “Who would have thought that a day would come when a proposal to prohibit protest against the killing of human beings would receive practically unanimous support from members of the Louth County Council? This is not the Ireland I was born in. It is not the Ireland that my parents grew up in, nor the Ireland of my grandparents or great grandparents. In fact, none of my ancestors would even recognise this brave ‘new Ireland.’”

Although the Coffey sponsored motion was passed, Louth County Council is now checking the motion’s legality before it is enforced.

A day before the Louth County Council vote was to take place a report appeared in The Times (Ireland edition). That report claimed US group Sidewalk Advocates for Life (SAFL) was planning “to open a sister operation in Ireland to intervene in the treatment of women trying to access GP clinics or hospitals offering terminations.” The report further claimed that the same group was training campaigners to wait in hospital car parks and “target couples who have received news of a fatal foetal abnormality [so as] to talk them out of having an abortion.” RTÉ, Ireland’s state broadcaster, reported the Minister for Health, Simon Harris, describing the alleged plans of SAFL “as chilling, manipulative and disrespectful of the democratic process”.  Harris told RTÉ that introducing new legislation for “safe access zones” was a priority for him, hoping it would be in place later this year.

Speaking on RTÉ radio, Lauren Muzyka, Executive Director of SAFL, described The Times article as sensationalist and refuted its claims saying that the agency “did not have any grand plan to put SAFL in front of abortion facilities in Ireland”.

She went on to add that SAFL is a law-abiding organisation: “We teach others how to lovingly and peacefully offer non violent solutions to abortion. So we let women know about the options of parenting, or becoming a loving birth-parent through the loving choice of adoption.”

Emma Coffey was a vocal supporter of repealing the Eighth Amendment during last year’s abortion referendum. Predictably, her recent motion and its passing was applauded by the Lawyers4Choice, a pro-abortion pressure group, who tweeted: “Great news from Louth County Council as a motion in favour of byelaws mandating exclusion zones around abortion providers is passed. Thanks to solicitor and Cllr @emhcoffey for her work in proposing and forwarding this motion, the first of its kind in Ireland”.

The next day on the Lawyers4Choice website there was a “draft safe access zones bye law” template ready for the next pro-abortionist politician when pushing for similar restrictions on freedom of speech elsewhere in Ireland.