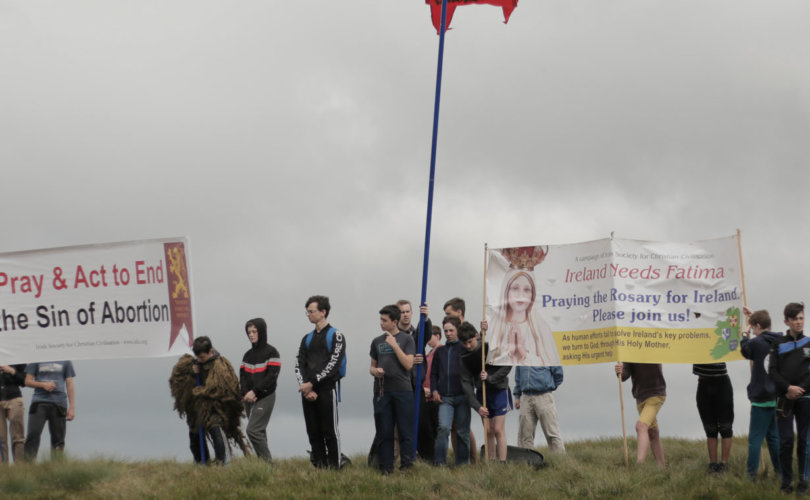 Rosary rally participants gather to pray along the Irish coastlineISFCC

DUBLIN, Ireland (LifeSiteNews) – Irish Catholics are being asked to join a nationwide rosary rally in commemoration of the 105th anniversary of the first apparition of Our Lady in Fatima and to publicly pray for the conversion of their historically faithful island.

The Ireland Needs Fatima campaign, organized and coordinated by the lay-led Irish Society for Christian Civilisation (ISFCC), seeks to establish around 500 individual gatherings in public squares throughout the country on May 14, one day after the anniversary of the first apparition of Our Lady of Fatima, in honor of her visitation and her request that humanity “stop offending God.”

In a press release obtained by LifeSiteNews, Ireland Needs Fatima rosary rally coordinator Gregory Murphy said excitement about the upcoming rally is growing and that, as the May date approaches, “momentum is picking up fast.”

“Our office is buzzing with activity. Volunteers and staff are busy contacting new rosary captains, answering questions and sending out supplies,” Murphy said.

Explaining the simple aim of the prayerful gatherings, Murphy said that “participants will proclaim their faith publicly, pray for Ireland, and send a clear message to secularists who want to ban God from the public square.”

A prayer program for the day informs the gathering faithful what to expect at the rallies, including an opening hymn, followed by the public recitation of the rosary, the Litany of the Blessed Virgin Mary, the prayer of total consecration according to St. Maximilian Kolbe, the recitation of the Divine Praises, and a closing hymn to Our Lady.

A promotional poster for the nationwide rosary crusade notes the words of St. Louis de Montfort, who said that “[p]ublic prayer is far more powerful than private prayer to appease the anger of God and call down His mercy, and Holy Mother Church, guided by the Holy Spirit, has always advocated public prayer in times of public tragedy and suffering.”

The Ireland Needs Fatima campaign has organized rosary rallies on numerous occasions over at least the last six years, all in recognition of the apparitions of Our Lady in Fatima.

“More and more people are looking to the Fatima message because it offers a sure remedy to the moral crisis in society,” the campaign organizer added, saying that “prayer, penance, and conversion are the answer to many problems.”

The campaign is still looking for volunteer rally captains to take charge of setting up gatherings in public squares throughout Ireland. The task of captains is simple, Murphy said, and “very easy to do.”

Materials, including “a banner, a manual, and leaflets to hand out to passers-by” will be provided by Ireland Needs Fatima, while a “real red rose will be sent to the Fatima Shrine for each rally captain.”