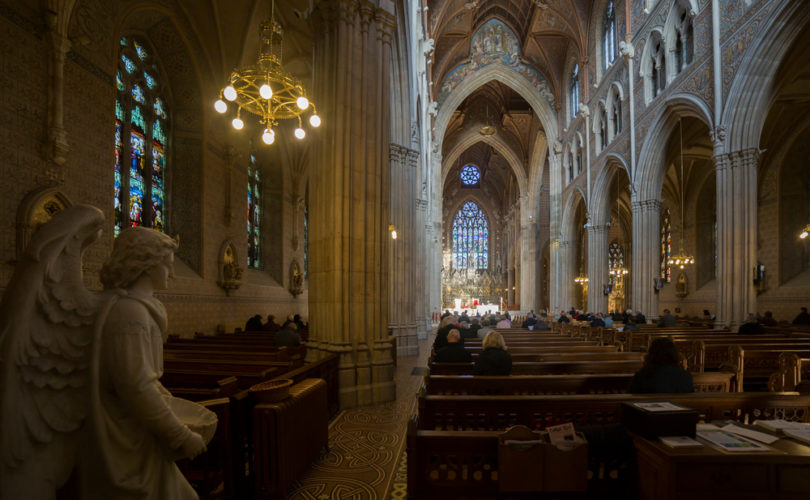 Speaking to the nation on Thursday, Martin announced the latest measures in the very gradual lifting of the severe lockdown.

Worship is currently still forbidden, and has been so since December 26, 2020, following the start of the current national restrictions on December 24. Thus, churches are only open for private prayer, as well as small funerals and weddings.

However, there are still are number of restrictions which will be placed upon the Church by the state even after this date of May 10. A government website explains that “it is advised that other religious ceremonies such as Communions and Confirmations should not take place at this time.” Furthermore, an attendance limit of 50 is to be placed on all weddings and funerals.

Some confusion exists about the exact limits on numbers allowed in the churches, however. In his address, Martin announced that “religious services can resume with a limit of 50 people attending,” yet the government website mentions this number only in reference to funerals and weddings.

The lightening of restrictions on public worship is accompanied by an easing of venues the government considers of a similar nature to churches, with outdoor retail commencing on May 10, and indoor retail starting a week later on May 17.

Galleries, libraries, museums, and “other cultural attractions,” are also set to open on May 10.

In light of this recent news, LifeSiteNews contacted Catholic Arena, which has been widely reporting on the current state of the Church in Ireland. A spokesman for the organization noted the manner in which the state still controlled the Church, despite allowing worship once more:

Although this is a welcome announcement, it still places a limit on 50 which means many smaller rural churches can be full to capacity and larger churches which can fit hundreds will not be. There is also the upsetting news that First Communions and Confirmations have been delayed in the Archdiocese of Dublin. The fact that the Irish media have embarked upon a blitz of negative campaigning against Catholic education in the past few days tells us that the hostility of the Irish establishment towards the Catholic faith shows no sign of letting up and there are still important battles to be fought.

Currently, formerly Catholic Ireland has the distinction of being the only country in Europe where Mass is strictly banned. Indeed, since the onset of COVID-related restrictions in March 2020, Ireland has been without Mass for the majority of the 12-month period.

This is despite freedom of worship being expressly protected in Article 44 of the Irish Constitution, which holds, “The State acknowledges that the homage of public worship is due to Almighty God. It shall hold His Name in reverence, and shall respect and honour religion. Freedom of conscience and the free profession and practice of religion are, subject to public order and morality, guaranteed to every citizen.”

Yet the past year has seen the Irish government ignore this constitutional protection, even beginning a new era of soft persecution.

In October it implemented a law threatening priests with a €2,500 fine or a six-month jail sentence for saying Mass. This was despite a large number of stores and services being allowed to remain open for business.

Since October, reporting on the effect of this law on Ireland’s Catholic population increased. Fr. P.J. Hughes became a prime example of the state’s unofficial persecution of the Church, as he faced multiple visits from the police, fines, and threats of jail. In the face of this warning from the police, and a lack of support from his bishop, Hughes responded that he was ready to face jail if necessary, adding, “I do not accept the negative message of our leaders who are telling us to stay away from Jesus.”

Since then, members of the laity all across Ireland have been regularly praying in public, in order that the restrictions on worship might be eased and bishops would stand up for the rights of the Church. On St. Patrick’s day this year, a number of Irish Catholics gathered in the capital city of Dublin, as well as other locations, holding a procession with a statue of Mary, and praying the rosary.

Police were in attendance, after having promised to establish a “ring of steel” of law enforcement around the city, and initially handed out fines to those more than 5 km from their homes.

However, upon the arrival of a statute of Our Lady of Fatima to the procession, a “miraculous” change took place, as police stopped taking down names and addresses and instead backed off and “escorted the procession to our destination.”

As reported by Catholic Arena, the Irish faithful have since been holding rosary rallies each Sunday, gathering outside the closed doors of their churches while awaiting the resumption of public worship once more.

In a bizarre move, the Irish government recently took their restrictions on the sacraments even further, explicitly banning by law the administration of the sacraments. Thus, even though an individual could meet a priest outside for a social visit, the sacrament of confession similarly held outside would be illegal.

Speaking to LifeSite at the time, Anthony Murphy, founder of the Lumen Fidei Institute and the Catholic Voice newspaper, criticized those responsible for the change in law as “not people of faith.” Consequently, he said, the new law “cannot be obeyed because it is totalitarian in nature and comes from a bullying State which has now overreached itself. The only way to deal with bullies is to tackle them head on and I would encourage faithful clergy and laity to form networks and continue with the public celebration of the sacraments.”

The current plight of Irish Catholics, due in a large extent to the surrender of the bishops early last spring, attracted the attention of Bishop Athanasius Schneider, who recently wrote an impassioned letter of support:

From all my heart I support your noble campaign to get people to pray the Rosary outside their churches in the hope of a return to the Mass. May there be formed a great living rosary chain across Ireland to win [against] the tyrannic suppression of the public Catholic worship. It is almost for everyone evident that such a draconic and systematic suppression of the Holy Mass exceeds the mere health safety. I send the blessing and my encouragement to all who participate in the Rosary campaign for a return to the Mass.

Bishop Schneider pointed to the example of the Irish martyrs during the times of persecution, holding them as an example for today: “In former times during the hard Penal times, the Irish Catholics left a heroic example of the loyalty to the Catholic Mass, being the Hill Mass celebrated all over Ireland clandestinely, especially on rocks, called the Mass rocks.”