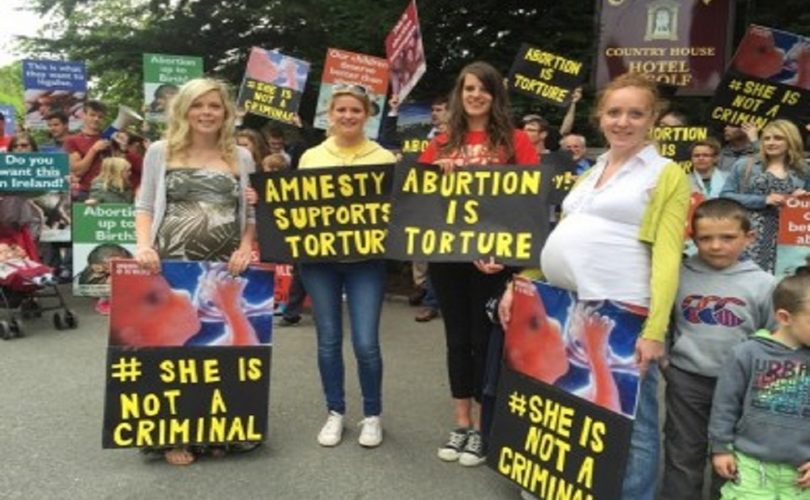 DUBLIN, November 25, 2015 (LifeSiteNews) – Ireland's health minister has joined the chorus of feminist groups calling for a referendum to repeal the country's 30-year-old Eighth Amendment, a part of the Constitution, which allows abortion only when the mother's life is directly threatened.

Children's Minister Dr. James Reilly told the Sunday Independent that despite the reluctance of the major parties (including his own Fine Gael) to support a referendum, the public wants it. “We have had more than 30 years on this and we really need political leadership on this issue. I think it is quite clear from opinion polls that the vast majority of people are way ahead of politicians on this.”

Reilly said women carrying unborn babies with fatal abnormalities should be allowed to have abortions, regardless of whether delivery poses a risk to their lives or health.

But Cora Sherlock, the head of the Prolife Campaign, told LifeSiteNews, “It is not something the people really want; it is not coming from the grassroots, but from a few pressure groups like Amnesty International. The people of Ireland have always had a heart for the unborn.”

Pro-abortion activist Sinead Kennedy of the Repeal the Eighth Coalition said every politician should declare his or her position. “We would like to see political parties in the run up to the election [expected in spring] come out and declare that this will be [a] red-line issue for any participation in government.”

In fact, in September, Ireland's Taoiseach, or prime minister, Enda Kenny, said his government, if re-elected, will hold a referendum on the Eighth Amendment only if a workable alternative is advanced at the same time.

Sherlock noted that despite an “aggressive campaign” from Amnesty Ireland and its uncritical promotion by the news media, popular support for the referendum is waning. A poll published by the Sunday Independent on Nov. 22 showed 56% in favor of the referendum, down 10% from June, with 22% opposed.

“I think it is going down because people are becoming aware of the Planned Parenthood stories from the U.S., and of Kermit Gosnell,” Sherlock said, in reference to the videos showing America's leading abortion provider trafficking in body parts from aborted babies, and to the abortionist convicted of multiple murders of babies who survived his botched abortions only to be executed by him and his staff afterwards. “The news media don't like to cover those stories, but the social media has a mind of its own,” she added.

Last year, several government ministers declared that the people of Ireland had “no appetite” or “little appetite” for a referendum; however, they might vote if it were held anyway. They promised there would be no referendum before the 2016 election and even warned against making it an election issue, which was the case in 1983 with the referendum that put Amendment Eight in the Constitution in the first place.

The Eighth Amendment declares the unborn child's life as equal to, and equally worthy of protection as, the life of the mother. The vagueness of this formula led the current government to pass a law two years ago allowing abortion when the mother's life is at risk, including at risk by suicide, right up to the day of a child's birth.

Popular opinion still opposed abortion as late as 2007, but by 2012, support for abortion had risen to 85%. Lately, Amnesty International has lent its reputation to the push for a referendum, leading Sherlock to predict, “Amnesty will be the loser when the hypocrisy of a so-called human rights group attacking the unborn becomes evident and when people see that they are only willing to talk about teenage pregnancy, but not about the unborn, not about the Planned Parenthood videos nor Kermit Gosnell, and about how these go hand in hand with abortion on request.”