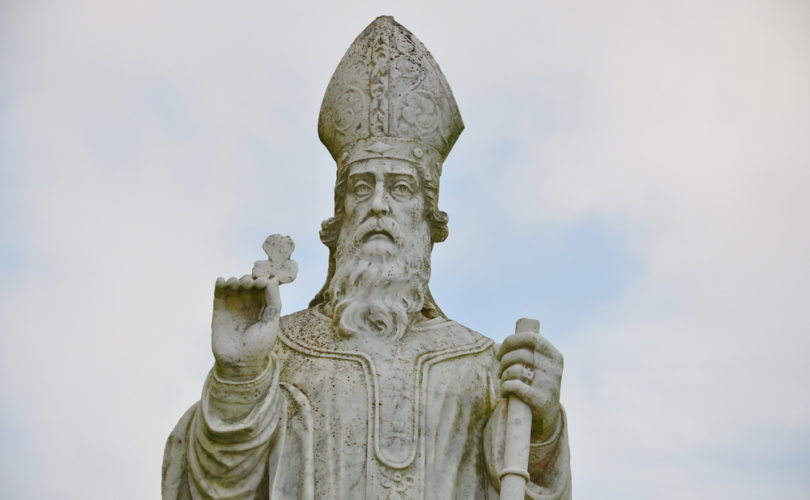 DUBLIN, Ireland (LifeSiteNews) — In yet another slight against the Catholic faith as part of a St. Patrick’s day parade, the government-backed St. Patrick’s Festival in Dublin is promoting a “Paradise Cabaret,” depicting St. Patrick in women’s underwear.

Dublin is currently hosting its first “St. Patrick’s Festival” since 2019, as Ireland’s severe COVID-19 restrictions prevented the festival  from taking place since then.

The official logo for the Festival is a snake, a reference to the ancient tradition that St. Patrick drove out all of Ireland’s snakes while in the process of converting the population.

The five-day Festival’s highlight is a parade through central Dublin on St. Patrick’s feast day, March 17. On March 16, the Festival was host to “A ‘Snakey’ Paradise Cabaret Special,” described by the organizers as featuring “comedy, circus, dance and music with the funniest weirdos and queerdos around.”

The chief promotional image used for the event showed a cartoon of four scantily clad women, in deliberately revealing postures, with the image of St. Patrick’s head atop each cartoon figure.

Hosting the Cabaret was “Cian Austin Jesus,” a comedian whose work focuses on “environmental advocacy, ecology of culture, queer identity, and play.” The event was free and unticketed, but advertised as limited to over-18s only.

Another of the opening events for the Festival included a “queer club show” featuring strippers, hosted by an LGBT nightclub in Dublin, which advertises “free condoms, Lube, HIV home self-test” on its website.

It “comes as politicians repeatedly call for laws to be made to stop the public from criticising them on social media,” wrote Catholic Arena, “yet once again here they are promoting hate not just against their own constituents, but against its entire people’s history through their vicious denigration of its patron saint.”

Only one day before, Fr. Brendan Kilcoyne, a popular Irish podcaster, called to “abolish” St. Patrick’s day, since it had become a “vulgar, drink-sodden bu*****t” day. Referring to the annual festival, Fr. Kilcoyne said “I won’t even call it a pagan festival, because pagans have gods, and the Irish now have no gods.”

The Festival is principally funded by the Irish Government, along with Fáilte Ireland (the national tourism authority) and Dublin City Council. Among the seven members of the Festival’s governing board are Dermot Horan — a high-ranking official at mainstream medial outlet RTÉ — and Dublin’s pro-LGBT Lord Mayor Alison Gilliland.

The Festival is a large attraction for international tourists. In 2019, the last pre-COVID event, an estimated €73 million was spent by international visitors coming for the festival, who made up only 37% of the Festival’s attendees.

LifeSiteNews contacted the festival organizers for comment about the Paradise Cabaret, but has not received a response as yet.

LifeSiteNews spoke to Mr. Rory O’Hanlon from the Irish Society for Christian Civilisation, who condemned the event, but said it came as “no surprise.”

“After years of seeing the Catholic Church in Ireland routinely mocked and vilified by public authority, media and the world of art, it comes as no surprise to see Saint Patrick depicted in a blasphemous way in the promotion of the St Patrick’s Festival,” said O’Hanlon.

Besides disparaging our patron saint, this event will likely encourage many Catholics to condone or even participate in this sin. It would not be amiss for the promoters of this blasphemy to remember that Saint Patrick, because of the hardships he endured and the obstinacy he faced during his mission in Ireland, asked of God that he be allowed to co-judge the Irish people on the day of Judgement.

O’Hanlon continued, “They are more likely to experience the wrath of God than a light judgement from a saint who they imagine has a soft spot for Ireland.”

Last year, hundreds of Irish Catholics defied the government lockdowns to hold a St. Patrick’s parade in Dublin, praying and singing hymns to “reclaim” the day for Ireland’s patron saint.