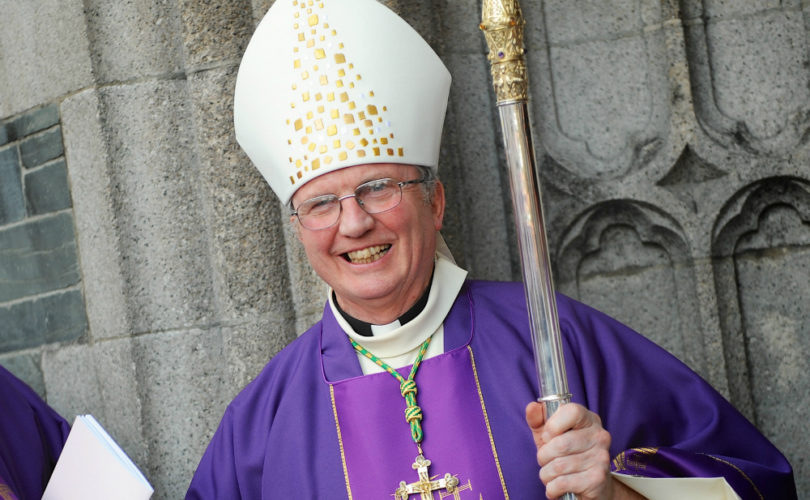 Same-sex 'marriage' would be a 'dangerous experiment,' but still, voting 'yes' in Ireland's referendum may not be wrong, says Bishop Donal McKeown of Derry.

DERRY, Northern Ireland, May 20, 2015 (LifeSiteNews.com) — Despite opposition by the Irish Catholic Bishops' Conference to the proposal to change the meaning of marriage in the Constitution of Ireland in the May 22 same-sex “marriage” referendum, an Irish bishop told a radio talk show host that he would “hate” to see people vote against the change “for bigoted, nasty, bullying reasons.”

Bishop of Derry Donal McKeown was speaking for the “no” position on the referendum, as supported by the bishops of Ireland, in a debate on the Shaun Doherty Show.

Although he maintained that legalizing same-sex “marriage” would be a “dangerous experiment,” especially the ramifications in the lives of children and future generations, he equivocated that people could vote yes or no in the referendum “in good conscience,” if they were as informed as possible before voting and were making a “mature decision.”

“I don’t doubt that there are many people who are practicing churchgoers of whatever church background who will in conscience vote Yes, and that’s entirely up them. I’m not going to say they’re wrong,” he added.

The Catholic Bishops' Conference of Ireland is making a concerted effort to educate voters on the real repercussions of changing the meaning of marriage.

Archbishop Eamon Martin of Armagh, Primate of All Ireland, warned that redefining marriage would result in the destruction of religious freedom.

“If society adopts and imposes a ‘new orthodoxy’ of ‘gender-neutral’ marriage, being defined simply as a union between any two persons – including a man and a man, or a woman and woman – then it will become increasingly difficult to speak or teach in public about marriage as being between a man and a woman,” Archbishop Martin said in a statement on the Irish Catholic Bishops' Conference website.

“Will there be lawsuits against individuals and groups who do not share this vision? What will we be expected to teach children in school about marriage or about homosexual acts? Will those who continue to sincerely believe that marriage is between a man and a woman be forced to act against their faith and conscience?” the archbishop speculated.

“Marriage is about much more than a loving relationship between consenting adults. Marriage has another essential element – the openness to children who are born of the love and sexual relationship of their mother and father,” the archbishop continued. “This is why, as Article 41:3:1 of the Constitution puts it: The State pledges itself to guard with special care the institution of Marriage, on which the Family is founded, and to protect it against attack.”

The Archbishop of Tuam, Michael Neary, said that voting to redefine marriage would also redefine the meaning of family, to the detriment of the rights of children.

“We should be aware of what is at stake here,” the archbishop said at weekend Masses. “We are in fact redefining the family.”

“Throughout history and across all cultures, marriage has been consistently understood to be the union of male and female with procreative potential,” the archbishop observed, stressing that “the family is the seedbed of the future, the best way we have yet found of fostering security and trust,” and that “one of the most important and fundamental questions that each of us has to consider is the rights of the child.”

Archbishop Neary concluded that “a society that identifies the two parties in marriage as spouse 1 and spouse 2 has lost sight of a deep truth of human nature.”