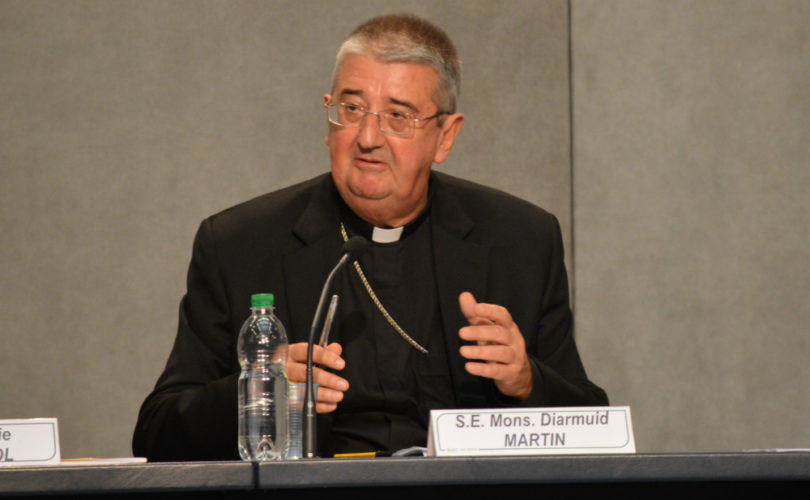 DUBLIN, February 9, 2018 (LifeSiteNews) – The Archbishop of Dublin, Diarmuid Martin, has pledged that the World Meeting of Families will remain “an inclusive event, open to all families and family members” after a flood of reports concerning the Vatican and a former Irish president, a dissident Catholic and LGBT activist, washed up at his door.

Several news outlets have reported that Mary McAleese had hoped to speak at a conference next month to mark International Women’s Day that was to be held on Vatican grounds. But, when a list of proposed speakers that included McAleese was allegedly submitted to Cardinal Kevin Farrell, prefect of the Dicastery for the Laity, Family and Life, he struck her name from the list. Organizers have now moved the conference to a venue outside Vatican City.

McAleese, an outspoken supporter of homosexuality, has suggested that Catholic sexual teaching is a form of “child abuse.”

With Farrell being an organizer of the upcoming Irish World Meeting of Families in August, LGBT advocates are now worried what the action against McAleese might mean to the event that some Irish bishops have promised will be open to attendance by homosexual couples.

When Archbishop Martin was asked about the “ban” on McAleese, he denied having any prior knowledge of it. He went on to underscore that the World Meeting of Families “will be an inclusive event, open to all families and family members,” reported Irish Times last week.

Martin 's statement comes in the wake of images of same-sex couples as well as pro-homosexual texts having been removed from a reissued booklet created by the country's bishops to prepare Catholic families for the upcoming event.

The booklet had contained a picture of two lesbians on a bridge clinging intimately to one another and text that contained explicit promotion of homosexual relationships as a form of family.

One problematic line which is now deleted from the original program booklet stated, “While the Church upholds the ideal of marriage as a permanent commitment between a man and a woman, other unions exist which provide mutual support to the couple. Pope Francis encourages us never to exclude but to accompany these couples also, with love, care and support.”

In the new edition, six photos which either overtly portrayed gay couples were replaced with images displaying families consisting of father, mother and children.

While the Irish Bishops offered no official explanation for the revisions to the WMF booklet, The Irish Times, Irish Independent, and the German Catholic bishops website are attributing the deletion of pro-LGBT images and text to a LifeSiteNews article critical of their inclusion in the booklet’s original edition.

A spokesperson for the pro-LGBT organization Dignity USA told Irish Times that it was disappointed that photos of same-sex couples had been removed from the conference’s preparatory booklet.