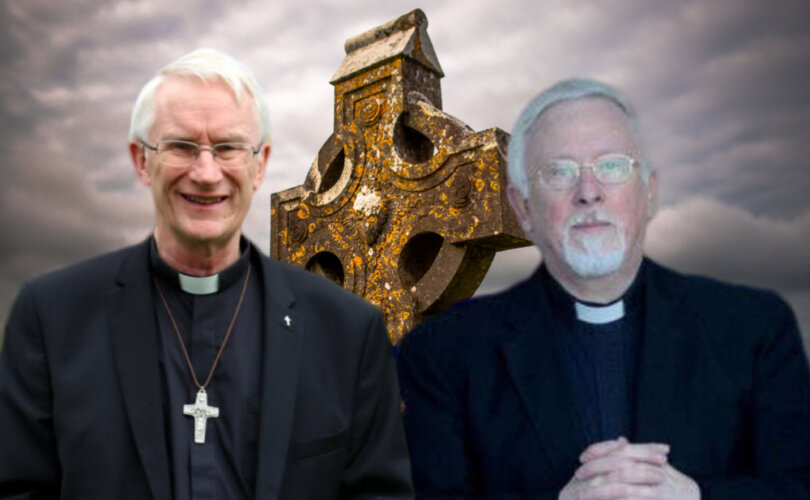 LISTOWEL, Ireland (LifeSiteNews) – An Irish Catholic priest who outlined the Catholic prohibition of abortion and homosexuality in a recent homily has stated his bishop has temporarily restricted him from saying Mass in light of his comments.

Father Sean Sheehy made media waves over the last weekend in October, when he delivered a forthright sermon presenting the Catholic condemnation of abortion, transgenderism, contraception, and homosexual acts. The retired priest was covering for the parish priest of St. Mary’s Church in the Diocese of Kerry.

Sheehy decried the “lunatic approach of transgenderism” and said that sin was “rampant” as seen “in the promotion of sex between two men and two women. That is sinful. That is mortal sin, and people don’t seem to realize it, but it’s a fact.”

Following his homily – during which up to 30 parishioners reportedly walked out – Kerry’s Bishop Ray Browne condemned the priest, saying that his comments “do not represent the Christian position.”

‘The will of the people is not the criterion for truth’

Undeterred, speaking to Radio Kerry on Tuesday, Sheehy affirmed his statements, saying that the attacks on the family he outlined in his homily are “really sinful … totally contrary to the Scriptures and to the teaching of the Church.”

When questioned about Ireland’s vote to approve same-sex “marriage,” Sheehy responded that “the democratic will of the people is not the criterion for truth. It comes to us from God, and the Scriptures, and through the teaching of the Church, not through the people.”

Sheehy was also challenged to be “more compassionate” in the style of Pope Francis. However, he noted such phraseology has been twisted in modern parlance.

Instead “compassion” means to assist someone, he said, adding that “the greatest help I can be to people is to provide them with an opportunity to repent of their sin and seek forgiveness which God makes available through His Church.”

He also did not shy away from stating that openly homosexual politicians, such as the incoming Taoiseach Leo Varadkar, were rejecting the laws of morality through their actions. “What they’re doing is contrary to the law of nature and secondly, and more importantly, it’s contrary to the law of God. When you go against God, who is the author of life, you actually go against life itself.”

“Compassion must never be at the expense of the truth as revealed by God, Jesus Christ and the teachings of His Church,” added the priest.

He also reiterated his condemnation of the promotion of contraception, saying that it directly leads to abortions. “The sexual health message is basically, ‘go ahead have sex so long as there’s not going to be a pregnancy and if there is a pregnancy go have an abortion’,” stated Sheehy. “That’s the sexual health message. That’s a very unhealthy and inhuman message to send to people.”

Despite the fact that between 20 and 30 people walked out of his homily during the weekend, Sheehy revealed Tuesday that he enjoyed strong support from the parishioners. He stated that after Mass Tuesday he received a “standing ovation” and that people came into the sacristy thanking him for his words, saying “it’s high time we heard the truth.”

Sheehy also stated that Browne had privately informed him he would be removed from saying public Masses until the priest he is covering for returns.

However, Sheehy added he was not concerned by the bishop’s words, as “I know myself what I said cannot be disproven by any honest-to-God Catholic, Christian, or [by] Catholic teaching.”

“I think what’s he is doing basically is, he’s actually sacrificing the truth or he’s muzzling the truth in order to appease people because they don’t want to face reality that they need to face before they die, and that’s a given.”

— Article continues below Petition —
Stand with pro-life priest Fr. Fidelis as he faces jail for defending unborn babies
Show Petition Text
13343 have signed the petition.
Let's get to 15000!
Thank you for signing this petition!
Add your signature:
Show Petition Text

Browne’s November 1 statement roundly condemned Sheehy’s homily, as the bishop “apologized to all who were offended” for what he described as “deep upset and hurt caused.”

However, during his radio interview, Sheehy said the bishop “was totally wrong” and that “the poor man mustn’t even know the Catechism. He certainly doesn’t know the Scriptures, to make a statement like that.”

Sheehy said that, instead, Browne was arguing from “his emotional side,” and that the bishop is “sacrificing the truth for the sake of appeasing people who do not want to come face to face with their sinfulness.”