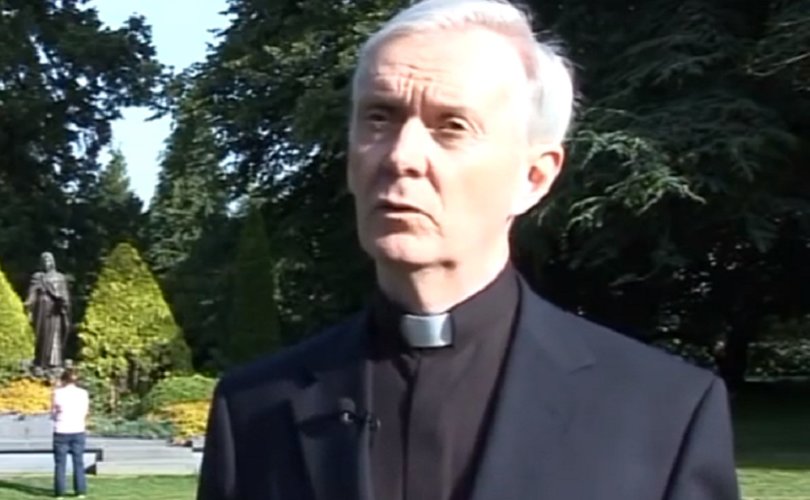 DUBLIN, September 24, 2019 (LifeSiteNews) — Bishop John Fleming of Killala put his official support behind a process intended to effect the ordination of women as priests, following a vote by 69% of the members of his diocese.

According to Bishop Fleming, whose diocese is in the far west of the Republic of Ireland, a vote was held as a part of a “listening process” he instigated. The process was sparked by an analysis that estimates that there will be but three to six priests serving the 22 parishes of the rural diocese by 2037.

In the balloting, 80% of the assembly voted in favor of a female diaconate, while 69% voted for female priests. The vote found that 85% want married priests. The vote also found that 86% want the Catholic Church to change its teaching regarding homosexual relations and to include persons regardless of marital status, family status, or sexual orientation.

According to the Irish Examiner, Fr. Brendan Hoban of Ireland’s Association of Catholic Priests claimed that Bishop Fleming wants to incorporate the assembly’s findings into diocesan policy. Those suggestions that are not within the diocese’s capacity will be passed on to the Catholic bishops’ conference and the apostolic nuncio. The newspaper quoted Fr. Hoban, who said,

“There was no point us deciding that we were going to ordain women or married men as we don't have the ability to do it, but we could control organizing lay ministers in a different way.”

Bishop Fleming had earlier stated, “These proposals, when accepted, will then become diocesan policy and form the basis of our Pastoral Plan for the Diocese.”

At the onset of the process, about 1,500 members of the diocese, including 356 teenagers, answered a survey that looked at a range of issues. Their responses were processed by Ireland’s Institute for Action Research and then presented as proposals for a vote by a diocesan representative assembly. As part of the bishop’s “Placing Hope in Faith” project, the 300 members of the assembly, including parochial delegates, took a vote, while in a second phase, there were 120 participants in 10 focus groups.

The Diocese of Killala consists of 22 parishes and includes portions of Counties Mayo and Sligo. The Killala diocese has a Catholic population of about 37,000, including 37 priests. In 1973, according to Church Militant, there were 62 priests in the Diocese of Killala. In 2019, eight men were ordained in Ireland, fewer than two priests per million.

Upon announcing his listening process, Bishop Fleming noted that the ten focus groups would examine the following categories: Family/Pastoral Care, Prayer, Liturgy/Deacons, Youth, Management of parishes, Lay participation, Inclusion, Women in the Church, Education in the faith, and Vocations. The focus groups continue to work; their conclusions are expected in December, which the diocese intends to implement next year.

Calling the process an “inclusive initiative,” Fleming said he wants to hear from inactive Catholics, as well as young people. Earlier this year, Bishop Fleming said he had been inspired by Pope Francis, who said in his message for the 2016 World Communications Day that “listening … means being able to share questions and doubts, to journey side by side, to banish all claims to absolute power and to put our abilities and gifts at the service of the common good.”

The Killala diocese expects the conclusions of the focus groups by December and has promised to implement their initiatives in 2020.

In the Killala diocese, there is apparently little provision made for traditionalist Catholics. For example, Bishop Fleming and the Killala Council of Priests decided that there would be no celebration of the Mass in the Extraordinary Form. This remained the case even after Cardinal Dario Castrillón Hoyos, as head of the Ecclesia Dei Commission, wrote to the bishop and pointed out that such a prohibition is forbidden under canon law ever since Pope Benedict XVI allowed the Latin Mass to be celebrated universally.

In October, the Association of Catholic Priests will host a seminar in Dublin featuring former Irish president Mary McAleese, a noted supporter of the ordination of women and the LGBTQ agenda. Announced on the Killala diocesan website and titled “Women and the Church: Equality of Opportunity,” the seminar will also feature Sharon Tighe-Mooney, who also advocates for women’s ordination. She is the author of What About Me? Women and the Catholic Church.

On its website, the Association of Catholic Priests noted that We Are Church Ireland is hosting a discussion featuring McAleese and dissident Catholic nun and theologian Sr. Joan Chittister that is titled “The Women the Vatican Couldn’t Silence.” We Are Church Ireland lists among its six goals the abolition of the celibate male priesthood, while it wants a Church that is “inclusive” to all, regardless of sexual orientation.