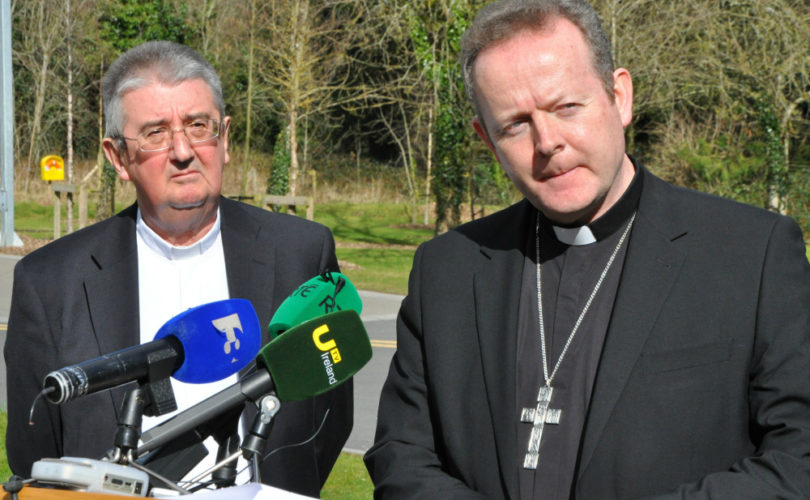 The bishops put forth their opinion among several other points in a document recalling the topics discussed at their spring 2019 general meeting in Maynooth. Under the heading “Consultant posts advertisement in Obstetrics/Gynaecology, and in Anaesthesia,” the bishops noted on March 13, “A doctor who is eminently qualified to work as a consultant in these fields is denied employment in these roles because of his/her conscience.” The bishops stated, “Doctors who are pro-life and who may have spent over a decade training in these areas … would not be eligible for consideration. This totally undermines the whole concept of freedom of conscience which was guaranteed in the recent legislation.”

The notes from the spring conference contrasted with the more forceful tone expressed at the end of the bishops’ December meeting. Commenting on the 2018 referendum that legalized abortion in Ireland, the bishops called for Catholics to resist the new law: “Women’s lives, and the lives of their unborn children, are precious, valued and always deserving of protection. Any law which suggests otherwise would have no moral force. In good conscience it cannot be supported and would have to be resisted.” They said then that abortion “can never be justified.”

Irish pro-life activist and economist Brian O’Caithnia, reacting to the bishops’ conference notes, said in an email to LifeSiteNews that the Catholic Church should stop surrendering its hospitals to the Irish state. “Handing Catholic hospitals over to the State knowing they will be used to become abortuaries,” he wrote, “surely makes the Irish bishops complicit in abortion.”

The Irish bishops’ irenic treatment of the abortion issue contrasted with the approach to a similar matter taken by one of their colleagues across the Atlantic. In the United States, when New York state legislators stood in applause to congratulate themselves for passing the most radical abortion law in the country, Bishop Joseph Strickland of Tyler, Texas, tweeted, “The video of the ‘celebration’ of New York legislators as they condemned even full term unborn children to Death by Choice is a scene from Hell.” Commenting on New York’s Reproductive Health Act, which was signed by Gov. Andrew Cuomo (D), Abp. Strickland added in a Jan. 25 tweet, “Woe to those who ignore the sanctity of life, they reap the whirlwind of Hell. Stand against this holocaust in every way you can.”

On March 19, Archbishop of Dublin Diarmuid Martin told a congregation at the Anglican St. Michael’s Church in Limerick that human progress offers insights into how Catholic teachings may be understood. “Constantly repeating truths can in itself be a sign of fearfulness and a retreat from realities,” he told his Anglican audience. Offering a glimpse of his thinking about Irish clergy and faithful who are concerned about the direction of their shrinking church, he said, “This is the problem with ‘cultural warriors of certainty’ who focus perhaps on one aspect of the truth and affirm a certainty in a way which comes from human assertion and from within a personally defined safe space. These people can become a source of division and partiality and polarization and can in their own way manipulate Church leadership into a certain sympathy with them and into taking wrong decisions.”

In his address, the archbishop did not mention sin or abortion.

For his part, Primate Archbishop Eamon Martin has called on the Irish people in the past to become “missionaries for life” and insisting that abortion “ends the life of a girl or boy,” he has been criticized in the past for adopting the language used by pro-abortion advocates. In a 2018 RTE video clip, the archbishop said, “I would hope that those who advocated a ‘no’ during the [abortion referendum] campaign will now work very actively to try to ensure that the legislation that is passed, as the Taoiseach himself said, allows for abortion which is rare, which is safe, and which is legal.” A spokesman later told LifeSiteNews that the video clip had been “heavily edited” and “taken out of context” and that the archbishop was referring to the words of Ireland’s prime minister (taoiseach), Leo Varadkar.

Since their spring meeting last month, the bishops have not issued any statements about the prospect of physicians in Catholic hospitals being required under law to perform abortions. No press conference or video statement ensued after the conference.