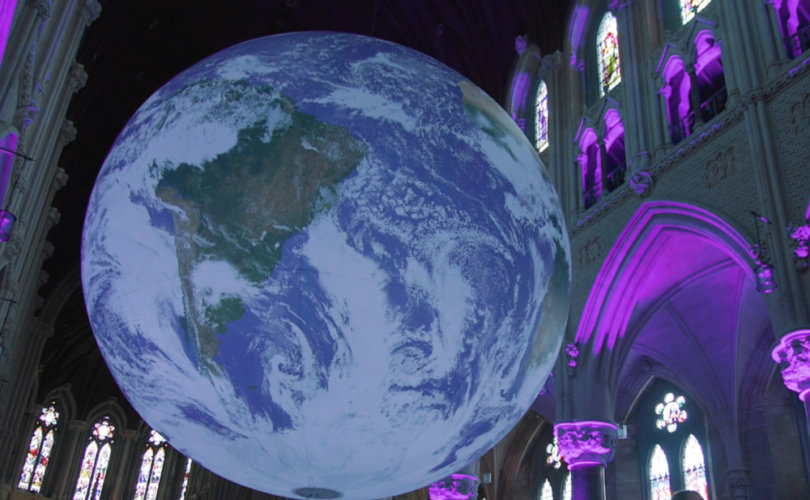 COBH, Ireland (LifeSiteNews) – A historic Catholic cathedral in the south of Ireland is currently displaying a giant earth sculpture named after a pagan god of the earth, in an ecological display attempting to “appreciate the complex rhythms of our planet.”

The historic Cobh Cathedral in the Diocese of Cloyne is currently home to a giant sculpture of the earth, named GAIA, designed to highlight awareness of “climate change.” The name GAIA is that of the Greek earth goddess from ancient mythology – a goddess who is also known by the name of “Pachamama” among the Southern American native peoples.

The World has arrived to St. Colman’s Cathedral here in Cobh.

Opening tomorrow from 11am…

Brought to Cobh by @WilsonWilkie in partnership with Cobh Parish and St. Colman’s Cathedral. pic.twitter.com/qmxgQtn26K

Cobh cathedral is the tallest church in Ireland, and is a prominent religious and geographical landmark, having been designed by the prominent Gothic revival architect Edward Pugin, son of Augustus Pugin.

The GAIA Exhibition, running from June 15 – 26 as part of the Cork Midsummer Festival, consists of the sculpture of the earth held aloft above the pews in the cathedral, in the center of the nave.

Measuring seven meters in diameter, the sculpture was built by U.K. artist Luke Jerram, who hoped to alert viewers that “we urgently need to wake up, and change our behavior” to protect the “ecosystem.” “We need to quickly make the changes necessary, to prevent run away Climate Change,” he said of the project.

The sculpture was brought to Cobh by a Belfast couple, Anne and Garry Wilson, in conjunction with the cathedral clergy and management. It was previously displayed in the Anglican cathedral in Rochester.

The GAIA sculpture is open to the public during each of the 12 days it remains in the cathedral, although the exhibition is officially closed during the 10 a.m. daily Mass, only opening at 11 a.m.

Announcing the GAIA exhibition, Cloyne’s Bishop William Crean said it would highlight “the need to respect and cherish our common home which is beautiful beyond words yet fragile in the balance needed by the whole human family who must share it.”

“A human ecology is called for,” said Bishop Cloyne, “a care for both the blessings of the natural world that allows all to live in dignity and peace.”

He lauded the “creativity of the artist,” which he said “opens our minds to our noble responsibility to care for the earth and the whole human family, whereby our hearts and souls re-awaken our spiritual sensibilities to reflect and review our life’s patterns and pathways.”

Speaking to RTE News, Bishop Cloyne added the exhibition would “re-awaken a bunch of new thoughts and ideas in terms of our common humanity at this stage.”

Rising temperatures and climate change are the inspiration behind a spectacular new artwork on display at Cobh Cathedral in Co Cork. The installation representing earth is designed to get people to think about the fragility of the planet. pic.twitter.com/svA6X3mtVg

“Pugin churches are one of Irish Catholicism’s unique treasures,” a spokesman told LifeSiteNews. “They are a beauty designed with one purpose in mind, to draw people to the faith.”

— Article continues below Petition —
Pope Francis: Don't make Bishop McElroy a cardinal - he knew about McCarrick
Show Petition Text
12220 have signed the petition.
Let's get to 12500!
Thank you for signing this petition!
Add your signature:
Show Petition Text

Catholic Arena criticized the exhibition for its irreligious promotion and content, saying:

At a time when public buildings such as hospitals are stripping themselves of crucifixes and any remnant of faith and taunting Catholics in the process, the organisers of this event have made absolutely no mention whatsoever of God or belief in their promotion of this event. They could have entitled it “God’s creation” or something with a similar sense of respect for those who believe, rather than naming it after a pagan deity like “Gaia.”

Catholic Arena told LifeSite that “the Church needs creativity and art, but in a way that directs people towards God; it does not need to allow itself to be used as if it were a community hall.”

While parishioners at the cathedral linked the exhibition to Pope Francis’ ecological encyclical Laudato Si, Catholic Arena also linked back to Francis’ comments when critiquing the exhibition: “Last year, Pope Francis warned priests to ‘Keep us from becoming a ‘museum church,’ beautiful but mute, with much past and little future’. Perhaps those in Cobh should listen to him.”

LifeSiteNews contacted the Diocese of Cloyne and Cobh cathedral for further comment, but did not receive a response by the time of publication.