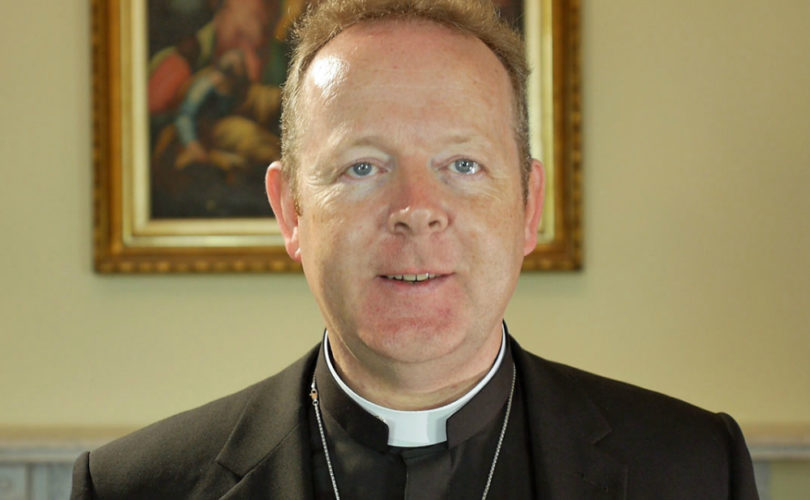 Archbishop Eamon Martin of Armagh, Primate of All Irelandhttp://www.armagharchdiocese.org

With the Catholic Church in Ireland, both north and south, rapidly losing its traditional public prestige, Irish Catholic bishops have had little to say about the recent changes to law allowing abortion in the Republic and the establishment of an early-term abortion facility in Belfast. But this week, Archbishop Eamon Martin, the recently-appointed head of the ancient diocese of Armagh, has surprised with a strong call to action against legalizing the killing of the unborn.

Martin is responding to the government’s public consultation on the province’s abortion law. The Church will be mounting a “robust and unapologetic defense” of unborn children and has asked ordinary Catholics to join it.

“With the support of my fellow Bishops, I encourage all those who support a culture of life to respond this week to the consultation process of the Department of Justice and to ask their politicians where they stand on these issues,” he said.

The archbishop called for his flock to “witness courageously to a culture of life” and add their voices to the consultation, saying, “One value which we should never grow tired of witnessing to, as Catholics, is the value and sacredness of human life itself.”

“Our Catholic faith brings with it a responsibility to build a culture of life,” Martin said, “where every person is worthy of the very best care and utmost tenderness; this is especially true of the most vulnerable and most defenceless persons.”

“This is becoming increasingly important when we are surrounded by what Pope Francis describes as a ‘throwaway’ culture which weighs one life up as more important and worthy of protection than another, and which would even discard the right to life of the most vulnerable,” he said.

The Justice Ministry’s consultation document “proposes that totally innocent and terminally ill babies in the womb will no longer have an absolute right to life, nor the right to all the care and medical support that we would expect and wish for any child or adult who is terminally ill,” he said.

Northern Ireland is the only part of the United Kingdom where the 1967 Abortion Act does not apply and the province remains one of the last holdouts in Europe against the near-universal legalization of abortion. This has infuriated abortion lobbyists who are determined to force the province into line with the rest of Europe either through the courts, regulations, or legislation.

In his homily on Sunday, Archbishop Martin said that despite the “extraordinary and unprecedented” efforts by the Justice Ministry to “exclude pro-life arguments from the debate,” the Catholic Church will be “making a robust and unapologetic defence of the right to life of both mothers and their terminally ill children during pregnancy and calling for all the love and support that we as a society can give them.”

Justice Minister David Ford has proposed to allow abortion for the killing of unborn children deemed to be terminally ill. The consultation has asked for opinions from the public on a number of possible changes to the law, including a “rape exception.” Such an incrementalist approach to changing abortion laws, based on so-called “hard cases,” is standard practice by abortion lobbyists faced with strong public opposition.

Shortly after being appointed to Armagh, Martin stood out from his brother bishops in Ireland when he said that Catholic politicians must not presume to receive Communion if they support the then-pending abortion law. “If a legislator comes to me and says, ‘Can I be a faithful Catholic and support abortion?’ I would say no. Your communion is ruptured if you support abortion,” Martin told the Sunday Times.

“You cannot regard yourself as a person of faith and support abortion. You are excommunicating yourself. Any legislator who clearly and publicly states this should not approach looking for communion.”

In May 2013, Martin said at a parish Mass that abortion is the “direct and intentional taking…of human life,” which is always “gravely immoral.”

“It strikes at the very heart of our faith and belief because it directly targets human life which is sacred and a gift from God. The right to life is such a natural and inviolable right that no individual, no majority and no State can ever create, modify or destroy it.”

Archbishop Martin, who is also the head of the Irish Catholic Church’s office of “safeguarding children,” came to his position as head of the Armagh archdiocese in unusual circumstances. In the aftermath of the Irish sexual abuse scandals, Martin, who was still only a priest, was appointed by Pope Benedict XVI as Coadjutor Archbishop of Armagh in January 2013, intended to replace the scandal-riven Cardinal Sean Brady. But he was not made a bishop – at the young age of 52 – until April 2013 and assumed the full title and leadership of the archdiocese upon Brady’s retirement in September 2014.

Such action to replace bishops in their own dioceses with, essentially, acting bishops is extremely rare in the Catholic Church and is done only when the Vatican considers the local situation especially grave. The case is even more unusual since the Archbishop of Armagh, a diocese founded in 445 AD and spanning the border separating the divided country, automatically receives the position of Primate of All Ireland, a position that places Martin as the titular head of the Catholic Church both in Northern Ireland and the Republic of Ireland.