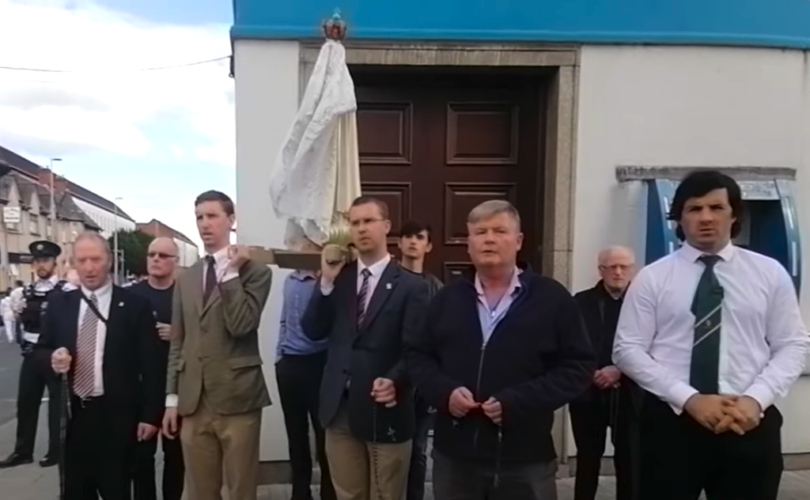 Gerry McGeough (center right) was assaulted while praying a rosary as an act of reparation for a “pride parade” in Cookstown.YouTube/Irish Society for Christian Civilisation

COOKSTOWN, Ireland (LifeSiteNews) – Irish Catholic man Gerry McGeough was punched in the face while praying the Rosary as an act of reparation for a “pride parade” on September 18 in Cookstown, Ireland, and suffered a heart attack the next morning. He is now awaiting surgery.

“I was personally assaulted,” said Gerry McGeough, 63, after he was punched in the face while praying the Rosary on a street corner as a homosexual “pride” parade went down the street.

“An individual filed with loathing and hatred came up and punched me in the face,” he continued, “And as a consequence [I] will find myself in hospital for several days [due to a heart attack].”

The video shows roughly a dozen Catholics on the corner of the street praying and holding up a large statue of Our Lady of Fatima, at which point a woman approaches the group and stands in front of them.

“Hail Mary, full of Grace, the Lord-” McGeough begins praying, when he is interrupted by the middle-aged woman punching him directly in the face.

Immediately after the surprise assault, policemen can be seen lunging and grabbing the lady, apprehending her against the side of a building as onlookers call her behavior “ridiculous.”

“For me getting punched like that, I offered [it] up to Our Lady, I offered up for the offense itself that has been given,” McGeough stated.

“And please God there will be a turnaround in the mentality of people, because people have been very cowed down by the whole homosexual agenda and everything that hands it, the abortion issue and contraception, and you name it, everything that’s essentially anti-Catholic,” he added.

McGeough organized the rally through a pro-life registered charity called the Irish Society for Christian Civilisation (ISFCC), who stated in the video description of the incident, “Please pray for Gerry who is recovering from a heart attack that he suffered on the morning following the incident.”

The ISFCC was created with the intent “to resist, in the realm of ideas, the atheistic, liberal, and socialist trends of our times and proudly affirm the positive values of Christian Civilization, through the dissemination of religious articles and Catholic literature, especially of the message of Fatima.”

McGeough said the prayer gathering was not a protest, but instead was “to pray a peaceful rosary of reparation for the offense given to God by a so-called ‘pride parade’ going through the town of Cookstown.”

— Article continues below Petition —
PETITION: Stand with Hungary for protecting children from LGBT propaganda
Show Petition Text
44619 have signed the petition.
Let's get to 45000!
Thank you for signing this petition!
Add your signature:
Show Petition Text

A spokesman for the ISFCC told LifeSite, “We consider public prayer to be of great importance. St Louis de Montfort said that public prayer was far more powerful than private prayer to appease the anger of God, and that Holy Church guided by the Holy Ghost has always recommended public prayer in times of calamity.”

“In the case of the Rosary in Cookstown, the event was organized in reparation for a public affront to God, that of celebrating the sin of sodomy, so the reparation also had to be public,” he continued.

According to The Irish News, McGeough’s solicitor Aiden Carlin is requesting the police to treat the incident as an anti-Catholic hate crime, as McGeough was intentionally targeted for a peaceful expression of his faith.

In a call-to-action, McGeough implores Catholics to “get out there and pray,” reminding them of the intense persecution, even unto death, that Catholics have historically endured to uphold the faith and keep it alive.

“You might get punched in the face from time to time but that’s nothing compared to being thrown on a bonfire, shall we say ‘hang, drawn, and quartered,’ and who knows, it may well come to that in the future and if it does, we’re ready for it, simple as,” he concluded.

McGeough is no stranger to standing up for the faith. He was recruited into the Irish Republican Army and the Sinn Féin party in the 1970s at the age of 16, but eventually renounced the left-wing nationalist party over their anti-Catholic views on abortion and homosexual “marriage.”

Since his departure from the Sinn Féin party twenty years ago, McGeough has stood in staunch opposition to the group he once supported, preferring to peacefully spread the Catholic faith through his homeland of Ireland.

“I, as an Irish nationalist and Catholic, never want to see the day when there are abortion clinics in every market town in Ireland,” he stated when he left Sinn Féin in 2001.

“I believe that we have a God-given duty to ensure that the faith is kept alive and passed on to future generations,” he continued.

In 2019, the first year abortion was legal in Ireland, an eerie 6,666 abortions were performed, something Liam Gibson, Political Officer of the Society for the Protection of Unborn Children (SPUC), characterized as “truly shocking.”

The ISFCC told LifeSite that McGeough is currently in hospital awaiting the insertion of a stent in response to his heart attack, and they are asking for everyone to “Pray for a full recovery for Gerry so that he can continue his courageous defense of the Catholic Faith.”