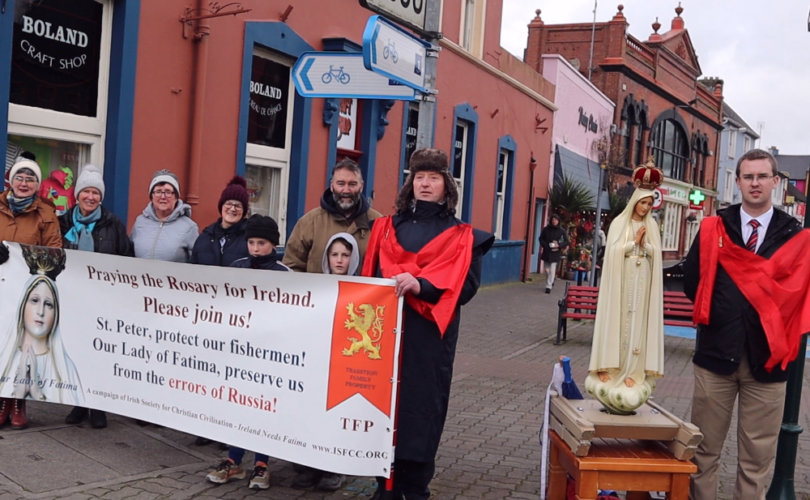 CORK, Ireland (LifeSiteNews) – The Irish Society for Christian Civilisation (ISFCC), an organisation of lay Catholics, recently held three Rosary Rallies in County Cork, praying to protect Irish fishermen who were defending their territory against incursions by the Russian Navy.

Between Thursday and Saturday in Castletown-Bearhaven, Bantry, and Kinsale, Irish Catholics led by the ISFCC prayed to St. Peter to protect Irish fishermen, and to promote the message of Our Lady of Fatima, specifically Our Lady’s warning about Russia – it “will spread its errors.”

The volunteers and friends of ISFCC also gave out 500 hundred rosaries, miraculous medals, and scapulars to the fishermen.

The Rosary Rallies were the focus of much attention due to the 9 foot banner which read: “Praying the Rosary for Ireland. Please join us! St. Peter protect our fishermen! Our Lady of Fatima, preserve us the ‘errors of Russia!’”

The participants prayed the Joyful, Sorrowful and Glorious Mysteries of the Rosary and sang Marian hymns between each decade.

Rory O’Hanlon, who led the Rosary Rallies, explained the purpose of the rally. “We are here for two reasons,” he said.

“First to thank and encourage the fishermen here for standing up to the Russian Navy, and second to remind people of Our Lady of Fatima’s warning of the ‘errors of Russia,’ that is, Communism.”

When the Russian Navy announced their intention to carry out live fire drills in Ireland’s Exclusive Economic Zone, the West Cork fishermen took matters into their own hands, threatening to disrupt the drills with sixty fishing trawlers.

This threat succeeded in making the Russians change course from their plans that not only disrespected the livelihood of the West Cork community, but also disregarded the right to private property, which Communism hates so much and works to abolish.

Damien Murphy, a volunteer for ISFCC, stated that, “the response of the locals to the rallies has been great.” He explained that the participants of the Rosary Rally in Castletown-Bearhaven were all invited to have a cup of tea in Murphy’s Restaurant after the gathering.

The passers-by often stopped to join in with the Rosary Rallies or to make the sign of the cross and many took photos and gave thumbs up in support. One lady heard the rosary from her home and joined the rally.

The idea of public square Rosary Rallies is not new, as the Irish Society for Christian Civilisation has organised hundreds of Rosary Rallies since 2010. On October 14th, 2017, the ISFCC organised two hundred Rosary Rallies across Ireland in commemoration of the centenary of Our Lady of Fatima.

O’Hanlon noted that “what we are asking people to do is what Our Lady asked of us at Fatima, prayer, penance and amendment of life. Because at the heart of every crisis in the world today lies a moral problem.”

“And it is through the rosary especially that God gives us the wisdom, prudence and confidence to solve our problems,” added O’Hanlon.