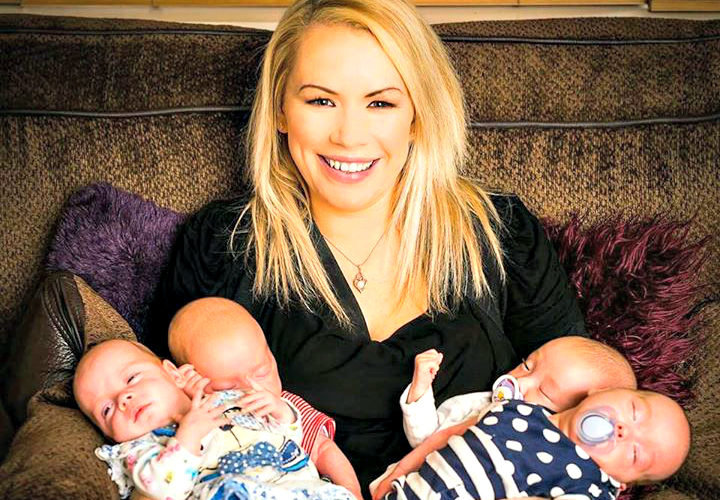 Grace and James Slattery suffered four miscarriages before giving birth to their quadruplets in May 2014.Facebook

An Irish couple who nearly gave up their dream of starting a family after the heartbreak of four miscarriages is elated to celebrate Christmas this year with their new quadruplets, born in May.

“The babies are our Christmas miracles. We are blessed,” Grace said. “We call them our fantastic four.”

The blessing is especially poignant this year since the Limerick couple had suffered the pain of miscarriage four times in as many years before becoming pregnant with the quadruplets. The Slatterys decided against trying IVF fertility treatment because the sorrow accompanying the miscarriage of their four older children had them thinking they couldn’t face anymore loss.

But then the miracle happened.

“Just when we thought we couldn’t go through any more and we were ready to give up we received the best news ever,” said Grace.

“When we went for the babies' first scan we thought we'd lost another baby,” she told the Daily Mail. “But we were given amazing news that we were definitely pregnant, everything was well and we were actually having quads.”

The website multiples.about.com gives the statistic of chances for naturally conceived quadruplets at 1 in 571,787 pregnancies. The site, along with others, estimates that 90 percent of quadruplet pregnancies are the result of fertility assistance.

For the Slatterys the painful specter of miscarriage remained present throughout the quads’ pregnancy, with the couple being advised not to get their hopes up at each appointment for the next 26 weeks.

“We left with mixed emotions as we were essentially told not to hold our breath, as quads usually don't survive,” Grace said.

The Slattery children again challenged convention by entering the world on their own time. Daughters Amelia Helen, Mollie Rose, Lily-Grace May, and son Lucas James arrived via Cesarean section when Grace was at 32 weeks, one day before she was scheduled to have the procedure.

The family’s miracle was magnified after Amelia defied doctors’ prognosis for her diagnosed birth defect.

Amelia had a congenital diaphragmatic hernia, when a hole in the diaphragm allows the contents of the abdomen to move into the chest cavity, the Daily Mail reports. The baby girl would need immediate surgery upon birth for her out of place organs, but her suitability for the procedure depended on her birth weight. Without surgery, doctors told the family, Amelia would only live for a few hours.

“We were told if Amelia was born too small, no surgeon would operate on her and due to her hernia, her heart was in the wrong place and lungs weren't properly developed,” said Grace Slattery.

At 4 lbs., 3 oz., Amelia ended up the biggest of the quads, and the surgery was a success.

“She has regular check-ups but has been a little fighter from the word go,” her mother said. “She bit the doctor in the hospital!”

Along with their gratitude, the Slatterys are looking forward to their first Christmas with their four children, who keep them very busy.

“It's hard work but it is so worth it to see our healthy, happy children,” said Grace.

She told the Daily Express that she really wants to encourage other women in her situation to keep trying because if they had given up they wouldn’t have the babies they do now.

“We are so glad our babies survived. We are delighted with our four healthy and happy little miracles. I never let myself dream this could happen,” Grace Slattery said. “We want this Christmas to be magical as we are so grateful to have all of our babies with us.”