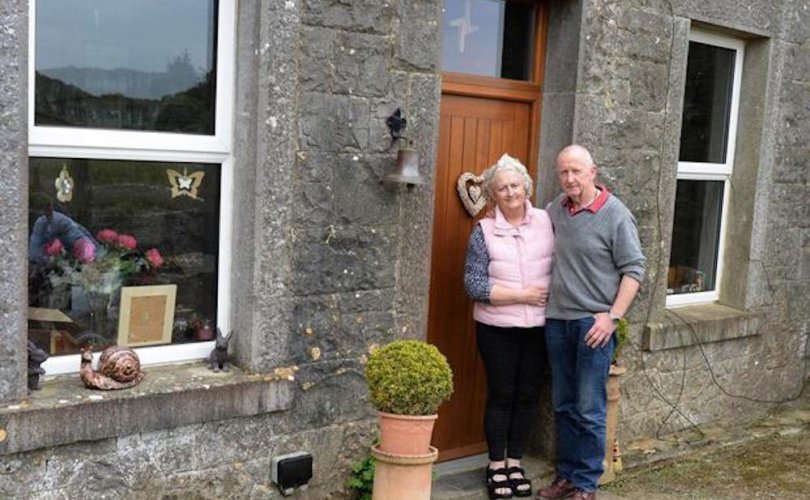 DONAMON, Ireland (LifeSiteNews) – A Catholic couple has said that they would rather go to jail than pay a fine for breaking COVID-19 restrictions by going to Mass.

Irish politicians were largely exempt from lockdown rules as were left wing protestors and those of non Christian faiths pic.twitter.com/haLEl9efp3

In April, the couple was charged for this alleged offense by Judge Raymond Finnegan at Cavan District Court. According to Independant.ie, the judge ruled that they must each pay a €300 fine.

“I will go to jail before I pay it. I would rather go to jail, without a shadow of a doubt,” Jim, a retired firefighter, reported. “I have no intention of paying them a fine for me going to Mass – for doing what I have done my whole life.”

Up until this point, the couple has led a law-abiding and quiet life in their stone cottage bordering a railway line in Donamon.

“We’re 64 and 59 years old,” said Ann, a retired nurse, and “have never had any convictions, are quiet-living people and are not affiliated to any organizations.”

“We’re just ordinary Joe Soaps – but with one difference, we honor God and we believe in God,” Anne continued.

The couple struggled to be able to attend in-person Mass because of the COVID-19 restrictions. “On one occasion, we went to a church near here and we actually got thrown out,” said Jim.

“The priest was filming a Mass to put on Facebook and when we saw it was on we went in,” he recalled. “But the priest came down to me and said we had to get out of the church.”

“For the sake of keeping the peace, I left the church, but that was the state we were in,” Jim continued.

‘The guards were waiting for us’

In March 2021, Fr. P.J. Hughes announced that he would celebrate Mass on the Feast of Palm Sunday at Our Lady of Lourdes in Mullahoran, County Cavan. This Mass would be open to everyone.

This decision was in contradiction to the Level 5 restriction which closed places of worship. “I will exercise my constitutional right even though people are complaining,” Fr. Hughes said while acknowledging that this was contrary to his bishop’s directives.

“We are committing a grave mistake by rejecting our Lord and God Jesus Christ by staying away because government officials say we must,” Fr. Hughes said in the lead-up to Palm Sunday.

News of this decision reached local media and several checkpoints were set up on the way to the church. “We read online that Fr. Hughes was saying mass at Mullahoran church and that he was going to turn no-one away,” recalled Jim.

“This was Psalm Sunday … the day Jesus rode into Nazareth on a donkey knowing the terrible torture and death he was facing and He kept going for our sins,” he continued.

“Going to mass that Sunday was extremely important to us,” Jim explained. “Ann had just gone through a life-saving medical procedure and we wanted to say thank you to God.”

Accordingly, Jim and Ann determined to travel 70 km to attend this Mass on this major Catholic feast. On the road, they were stopped at a checkpoint by an officer, Barry Mulligan, who instructed them not to continue to the church.

However, the couple continued their journey and participated in “an absolutely beautiful mass.” When it finished, Jim recalled, “the guards were waiting for us.”

The guards “took all the registration numbers and, I’d say afterwards, they contacted the different checkpoints and gave them the list of the cars.”

This April, the couple were called to court to face their charges. Immediately after being charged, the couple filed an appeal.

Jim explained that the restrictions violated their basic rights, saying, “Article 44 of the constitution says that we have the right to practice our religion in public.”

“It also says in Article 15 that the Dáil cannot impose a law that goes against the constitution – and this law did,” he continued.

Additionally, Anne said she chose to obey God’s law above man’s. “I decided on that morning that I was going to honor one of the ten commandments,” she said, “which was to honor the Sabbath Day.”

“On the balance of things, God’s law was more important to me than Man’s,” Ann said, adding, “Man’s law is fallible. God’s is not.”

Outside the court house, Jim told the Anglo-Celt, “Fr. P.J. Hughes, is a very honorable man, and a true priest, who has honored his vocation.”

“The judge said in there that that wasn’t our local church,” he explained. “It was our local church because it was the nearest church to us that was open. All the rest of them were closed and in defiance of the constitution.”

Ireland has had some of the most strict lockdowns and COVID related restrictions, as the country has drifted further and further from Catholicism.